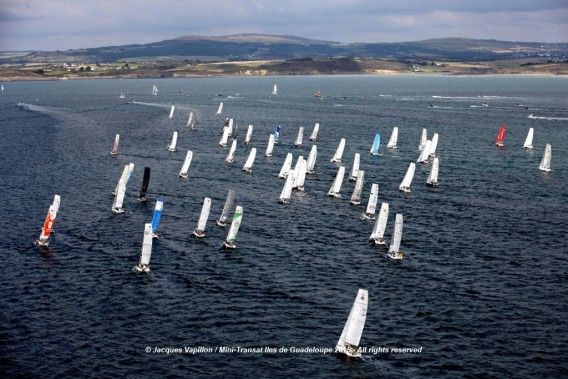 Ocean racing seems much better in fine weather. This was certainly the case for the competitors taking part in the Mini Transat îles de Guadeloupe. Conditions were almost ideal from Douarnenez to Lanzarote, which explains much of the general feeling of satisfaction among nearly all the competitors.

Most of the Mini Transat îles de Guadeloupe solo sailors have arrived and spent the last week in Lanzarote. They have started to get into habits, spot the good sites to practice their various sports, primarily water-related ones, and to catch up together in the evenings. Evenings are spent at each other’s places and friendships are forged. Spending eight days at sea before an Atlantic crossing creates strong relationships.

The Douarnenez Courses association has managed to seamlessly ensure the success of the first stage. As in 2013, many have appreciated the reception Douarnenez provided. The daily involvement of many volunteers in the organisation always gives a particular character to the events in the city Sardinn Penn.

The setting of Port Rhu provided an intimate surrounding for the fleet. The village quayside, with special loudspeakers for the commentary, stands and entertainment in the build-up to the event contributed significantly to the success of this week of preparation.

The highlight of course was the start, with commentary on France O, and the presence of two former illustrious participant sin the Mini Transat, Jean-Luc Ven Den Heede and Michel Desjoyeaux. There was ideal weather and perfect light; everything contributed to making this start a unique moment, one that will provide fond memories for competitors and spectators alike.

A stage that runs and runs

Besides excellent surfing conditions encountered along the coast of Portugal, the Mini-ists have relied this year on strengthened support boats, allowing better tracking of the race. Moreover, the presence in the fleet of the PSP Flamingo, the Navy patrol boat, helped to give regular news of the sea, live photos and supporting commentary. This is something widely appreciated by the competitors, their partners and their families.

The exceptional weather conditions meant a quick descent and a limited number of dropouts, as only eight competitors will not be present at the start of this second stage. Enhanced security conditions, particular care given to the creation of support boats, the highly competent intervention from the crew of PSP Flamingo all  helped make a near-perfect first stage.

Arriving in the new Lanzarote marina, the solo skippers found the capable team gathered around the Calero family to make this meeting an unforgettable one. Two pontoons were specially dedicated to Minis and there were all the amenities they needed: showers, Wi-Fi, a modern marina close by, and especially a place that is lively throughout the day and night, thanks to the many shops, bars and party places that line the docks.

Moreover, the many partnerships on the island of Lanzarote meant that the competitors can find their brands,  discover the best spots for water-sports, to take part in kite-sufing,  windsurfing or paddle-boarding, depending on their tastes. Lanzarote has an image linked to watersports and is doing everything possible to cultivate it.  As such, sailors from the Mini Transat iles de Guadeloupe are the perfect ambassadors.

The explosion of Media and social networks

With press releases being taken up in articles at a rate of more than 150%, and more than 13,000 followers on Facebook, the Mini Transat iles de Guadeloupe has taken on new dimensions this year. The numerous media partnerships and the quality and regularity of information have created a growing interest from the French press and the foreign press, both specialist press and more generalist.

Alongside a professional circuit which sometimes tends to sanitize information in the name of political correctness, the freshness of tone of the Mini Transat iles de Guadeloupe and the profoundly human dimension of the event, have an impact on journalists. With an original character, and a race that does not forget its roots,  with an organization that knows how to  analyse its strengths and know what remained to be done in  this second edition, plus the little bit of good luck  needed for success, this first stage has put the Mini Transat iles de Guadeloupe  in a strong position. There are still 2800 miles for things to change.

“I must admit, I am a happy organizer.  Partly, because the stage has been very good for competitors. I also think of the time at the start, a great moment for spectators from Douarnenez, broadcast live on the airwaves of France 0. The welcome in Lanzarote is really exceptional, the team has worked well together, whether in logistics, sports or communication. We have to repeat that in the same vein in the second stage “