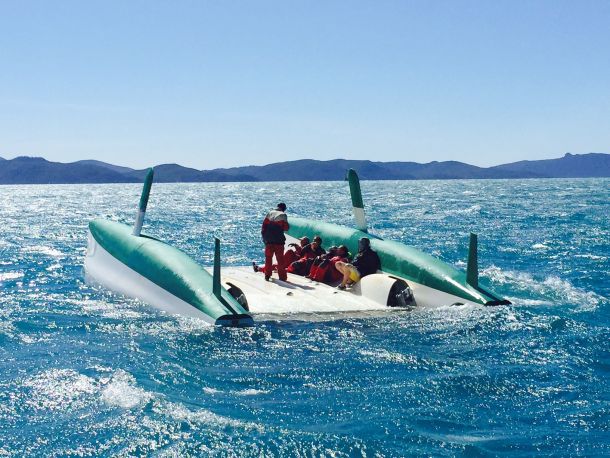 A 30 knot gust of breeze out of nowhere resulted in the 10.9 metre multihull, Cool Change, capsizing during Race 6 at Airlie Beach Race Week today, but her owner and all crew members were safe and back on land by lunch time.

Mackay sailor Bob Critchley and his crew were contesting an Island’s course when at around 10.35am, an hour into the race, crew from Belle, a monohull yacht sailing in the same race, reported to the event’s race committee that they had witnessed the 10.9 metre green multihull capsize and would stand by.

More Noise, Jason Close’s Archambault 31, from IRC Racing Division 2, was only around 60 metres away from Cool Change when it capsized and turtled to the upside down position. Close advised the race committee that More Noise would stand by.

Race Officials monitored the situation throughout and rescue authorities and water police were immediately notified. Along with the event’s Mark Boat 2, all three went to the scene while an ambulance was called in case of injury.

Fortunately, Bob Critchley and his crew were all on deck when the capsize occurred. They fell into the water before climbing atop the upturned hull of Cool Change before being transferred to other vessels.

All aboard were fine, save for a couple of cuts and bruises and shock. Fortunately, the water temperature was 20 degrees and none of the crew was in the water for long.

While some crew were taken aboard Mark Boat 2 and Blake Boulton’s racing yacht, Trumpcard, Critchley was taken aboard More Noise, whose owner, Jason Close said, “It capsized nearly on top of us. It all happened so quickly – three seconds was all it took before the boat was upside down.

“We used sign language to them to do a quick head count and realised all six crew members were on the hull and safe. We immediately dropped our sails to go and standby and assist. Then I got on the radio and notified race officials,” Close said.

“The forecast was for 20-25 knots, which is very sailable, but when we got to North Molle there were big sudden gusts,” he said.

Bob Critchley said never in his 30 years of sailing had he even come close to capsizing.

“That gust hit so suddenly, we didn’t get a chance to respond. Lucky we had a reef in the main. Even last year, when we sailed in much worse weather at Airlie Beach Race Week, nothing even like this came close to happening.

“We got hit suddenly by the biggest gust at Hanna Point and it was over in seconds – all six of us were on the hull quickly. We saw others around us get hit by the same gust.

Critchley said he was grateful to all who made sure he and his crew were safe and that their situation was being constantly monitored by the experienced race officials at Airlie Beach Race Week.

By the time they had reached Abell Point Marina, where More Noise is berthed during Race Week, Critchley had already advised his insurance company and a salvage crew, who were to retrieve the catamaran today.

“They’ll have to cut the mast and rig away and all the electronics are ruined. We all lost our personal possessions, watches, wallets and my hearing aids. My crew is a very experienced one except for one person, so we did all the right things,” the Queenslander ended.

Deputy Race Director, Jock Ross, has applied for redress on behalf of More Noise, which was leading the IRC Division 2 series with four wins from five races, and Trumpcard, which was sailing in the IRC Passage Class.

Hosted by the Whitsunday Sailing Club, racing at the ‘Tropical Festival of Sailing’ racing was still underway today. The event finishes tomorrow.