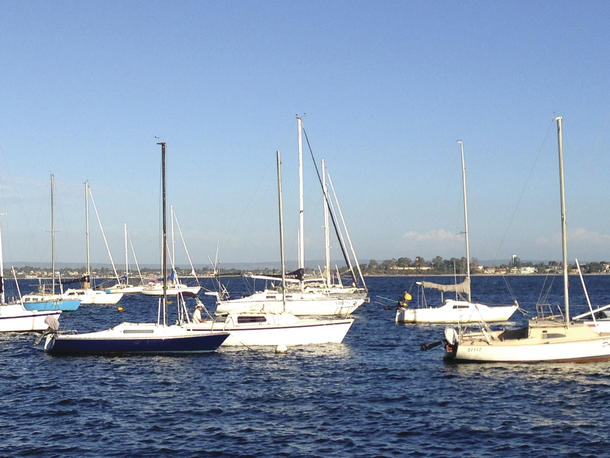 Whenever two yachties meet in Western Australia it takes only minutes for their conversation to turn to bridges.

Those bloody bridges that separate the river yacht clubs from the ocean. Those bridges that require river folk to lower and raise their masts in the middle of the bustling and turbulent Fremantle harbour in order to go to sea and come home.

Tales are told of broken fittings and outrageous stink boat antics that create dangerous wakes. It is a situation that has driven many to abandon yachting for mastless boats.

Peter Twiby took a different approach and took to his mast with an angle grinder.

Actually, it was his second mast, one he had bought secondhand for the purpose of making it possible to sail his Court 650 straight under the bridges.

The Court 650 is a beaut little boat. It is a trailer sailer made in the 1980s by WA political and boating dynasty the Court family. It has no built in motor but an eight HP outboard on the back gets her going at a cracking six knots in the right conditions. From the v-berth at the bow you can poke your head up and survey the morning activities in your bay of choice.

It is the sort of boat that claims to sleep five, but only if three of them are children and none of them have luggage. It is a day sailer for four and a weekender for two or three good friends. There is no built in loo or fridge, but there is room to stow a compost WC and an esky.

Best of all she has a fully retractable keel that means she can anchor in water shallow enough that we can simply wade ashore, doing away with the need to tow a tender and letting us park in calm corners of bays that others can not fit into.

All in all a great vessel for a trip to Rottnest Island or indeed any of the other local seaward destinations: if it was not for those bloody bridges.

Her original mast is 8.5 metres above the waterline. Only a bit too high to make it under the lowest of the three bridges that separate the river from Fremantle harbour. It sits just 7.3m above the high tide water level, but that bit made all the difference.

Prior to the angle-grinding, several mast lowering setups were developed. Whenever a battle against the ferocious power boat wakes was lost, a more sturdy design was implemented.

The final masterpiece was certainly a great work of engineering. It had complicated removable mast stabilisers, carefully engineered pivot point attachment plates, multiple block and tackles, a jazzy mast track car to support the mast on two spinnaker poles and masses of quality ropes, all with attitudes of its own.

But with the time taken to lower sail, connect all the components, lower the mast, traverse the bridges, raise the mast, disconnect the componentry and raise sail being around two hours interspersed with pointed and profane conversations with passing powerboaters; the desire to participate in this performance had waned. Sea voyages and Rottnest trips were suspended for a couple of years.

One day, while lamenting the inability to put to sea due to those bloody bridges, Pete recalled many a yacht he had seen at Rottnest with their masts removed. This got him thinking.

As a trailer sailer the Court 650 mast is readily lowered and removed when the boat is on the trailer. It would be easy enough to remove the mast and motor to seaward destinations.

The only issue here is the Freo Doctor. A therapeutically pleasant breeze that arrives most summer afternoons at 25 plus knots and brings with it seas several metres high. Some sort of steadying sail would be required; maybe a cheap mast from a mirror or something small.

Then a realisation hit. All crossings had been completed under a single or double reefed main and storm jib (due to the 30 knot winds experienced on all crossings in the Court). This meant a mast 1.5 metres shorter than the original should still sail OK as that top section of mast is bare anyway.

Aware of the experimental nature of his grand hack, Pete did not want to risk ruining the original mast so he started scouting online for another. Patience paid off and Gumtree hooked him up with a chap selling a Hartley 18 mast and rig for $300. The mast section and base fitting were identical to the Court 650 and the forestay connected to the mast 7m above the waterline making it perfect for the task. It even came with a few sails.

The mast was still too tall for the bridges and so the mast head fitting was levered off and the angle grinder roared into action. Off came the top metre or so and the fitting was banged back into the new mast top.

Then the task of remeasuring the rigging began. It was complicated by the fact that the boat was on the trailer and the trailer was on the ground and the ground was not completely level, making it hard to judge whether the mast was perfectly perpendicular to the deck.

Good guesses were made though, with room allowed for adjustments later. The rigging was attached to the new mast and adjusted to the correct length. A backstay was added to ensure the rig was sufficiently sturdy to handle the Doctor.

Pete had recently acquired a brand new fully battened mainsail for the full mast, so the sailmaker was commissioned again to remove the lower section of the old main to just above the first reef point to suit the small mast. While the luff may only be 5.8 metres, the boom sits head-crackingly low to get as much sail area as possible and a stackhat is now recommended safety apparel.

As for the headsails, the storm jib fitted perfectly but all the other Court headsails were too large. The two Hartley headsails fit, but the forestay was now at a very different angle and getting the sheeting angles right was a challenge. Later on an old number two headsail was recut to fit the foretriangle.

Before taking her under the bridges an afternoon was spent sailing across the river getting a feel for the new sail-to-boat ratio. With the headsail sheeting issue the boat was fine downwind, but poor to windward with leech tension just not sufficient to fly the sails properly. But, as Rottnest is generally a reach from Fremantle, the sails worked well enough.

Pete also sailed her up close to a range of boats moored near the club, including some known to fit under the bridges, while I took photos to show him how the new short mast measured up against them. The yachts known to make it include the Red Witches and Red Jackets, made by Hill and Cameron in the 1980s with the Freo-bridges specifically in mind, plus the Swarbrick-built Spacesailer 18. All good boats but the smaller cabins make them less comfortable for weekends away.

The photos indicated the mast had a good chance of fitting.

Suck it and see

Finally it was time to cross fingers and test the bridges. Pete chose a calm day and timed the test for soon after low tide. This may sound an odd approach as the water level would be higher after traversing the bridges, but with the incoming tide known to run at approximately three knots it allowed the yacht to approach each bridge very slowly with good steerage and most of all; instant back out.

The first of the three bridges is the concrete Stirling Bridge. It is ten centimetres higher than the old wooden traffic bridge, giving an opportunity to get an indication of the likelihood of success with a nice little margin for error. Nonetheless, as he approached each bridge, breath was held as the shadow fell over the deck and the optical illusion of impossibility kicked in. Pete braced for impact and moments later marvelled at the lovely site of the sail passing serenely under.

Since then the short mast has been a source of great joy. It has made the ocean accessible and rendered Rottnest a comfortable three to four hour trip from Nedlands Yacht Club, in decent wind.

Since then we have learned to gauge how high the tide is by looking at the algae on the bridge pylons. We now know that if green slime is visible, we will safely make it through. If, however, the water level is above the growth it is time to man the panic stations.

Panic strategies employed so far include politely asking the mobile ballast to lean out and tilt the vessel over. Another tactic is used when the tide happens to be going in the direction of the yacht approaching the bridge, to turn side-on so that any impact at the top of the mast would simply lean the boat over to minimise damage.

Luckily though impact has so far not occurred. Although there is always the fear that menacing wake-makers will throw a 2m wake under the bridge just as we are traversing, sending the yacht straight upwards slamming the top of the mast into the bridge and pushing the bottom of the mast down through the bottom of the hull. For this reason, we watch carefully for a break in powerboat traffic when passing under the bridges.

While the short mast has been brilliant, there are some drawbacks. Firstly, while changing the masts on the trailer is a calm, pleasant one hour task, laziness has resulted in the short mast staying rigged for many months.

In general this is not a problem, as the sail area is similar to a single reefed main with a number three jib, so in the strong summer winds this works OK. But in light winds, progress is slow.

This is further compounded by the fact that the mast was seen as a prototype for the concept, so it was deliberately kept simple to keep cost and time investments down.

Consequently, there are no sporty tweakers and go-fast adjusters, needed as the sails are all old ones cut down.

Lessons learned that could be applied in future mast reduction efforts include: firstly, not having to lower one’s mast in the maelstrom of Fremantle harbour is infinitely wonderful and well worth doing.

Secondly, plausible alternatives could include a twin rigged vessel with both masts the same height and less than 7.2m above the water. This would be suitable for vessels longer than the Court’s 6.5 metres and may work best on a centre cockpit design.

For yachts with no backstay, such as a Noelex 25, a cutdown mast could be used with a big roachy or square topped main. Or to take that idea further, a modern high top gaff rig design could potentially be used.

There have been some modern developments in this area with some boat builders using carbonfibre masts and gaffs. A rig like this could look very pretty.

And finally, if talk around the club and bays of Rotto is anything to go by, a manufacturer who can solve the bridges dilemma with a well-designed and functional vessel could do quite well in Perth.