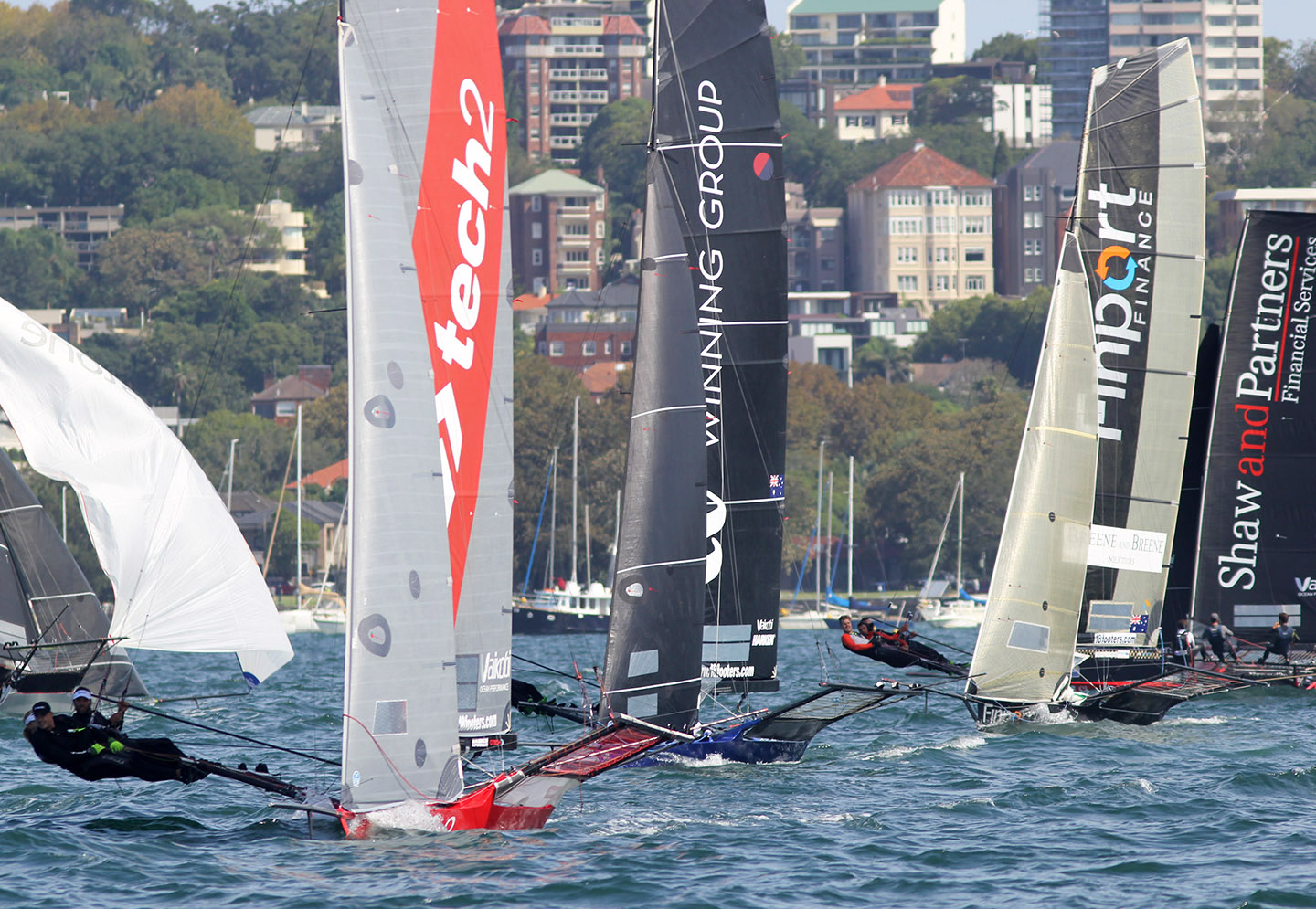 tech2 leads the fleet at the beginning of the second lap of the course. Photo Michael Chittenden/18 Footers League.

tech2’s team overcame an epic, race long battle with her arch rival Yandoo Winning Group to score a sensational, and possibly controversial, win in Race 2 of the JJ Giltinan 18ft Skiff Championship on Sydney Harbour today. As the fleet passed the finish line, tech2 (Jack Macartney, Charlie Wyatt and Lewis Brake) defeated Yandoo Winning Group,(John Winning Jr., Seve Jarvin and Sam Newton) by 33s, with Noakesailing (Sean Langman, Ed Powys and Josh Porebski) a further 1m16s back in third place. Finport Finance (Keagan York) finished in fourth place, followed by Andoo (Marcus Ashley-Jones) and Bird and Bear (James Dorron). Provisional overall points, after the two races sailed so far, have tech2 leading on two points, followed by Yandoo Winning Group on five points, Finport Finance on seven points, Smeg (Michael Coxon) and Andoo together on nine points and Noakesailing on 12 points. After Finport Finance won the start in a 13-knots North-East breeze, the race to the first windward mark was gripping as the two champion teams elected to sail entirely different courses.  tech2, along with most of the fleet, sailed a course on the left hand side of the harbour while Yandoo Winning Group chose a course on the right hand side near Steel Point. When the two skiffs met at the Beashel Buoy, only one boat length separated the two skiffs as the pair set their spinnakers for the long spinnaker run back to the bottom mark off Clark Island. What followed was an incredible two-boat race as both tech2 and Yandoo Winning Group fought the conditions and each other for the entire length of the run, with Noakesailing trailing just behind them in third place. tech2 ultimately won the battle and headed back up to the Beashel Buoy for the second time with a narrow lead over Yandoo Winning Group, Noakesailing, Finport, Smeg and Shaw and Partners Financial Services (Jim Colley). Spectators were once again treated to a wonderful contest as tech2 and Yandoo Winning Group staged a tack-for-tack match race, with Noakesailing again hovering just behind. While the two champion teams were the star attraction, the race behind the leaders was just as good with positions changing regularly amongst Finport Finance, Andoo, Smeg, Bird and Bear and Shaw and Partners. This time, tech2 led Yandoo Winning Group by 13s at the Beashel Buoy, followed by Noakesailing, Finport Finance, Andoo and Smeg. Yandoo Winning Group gybed soon after rounding the Beashel Buoy and sailed down the right hand side of the course while tech2, Noakesailing and most of the fleet also followed tech2’s course. As the fleet approached the bottom mark in heavy harbour traffic, the Yandoo Winning Group team believes there was an incident involving tech2 and lodged a protest against today’s race winner. Over the final lap of the course, tech2 edged slightly away from her challengers and headed for home with a 30s lead from Yandoo Winning Group and maintained her advantage to the finish line off Clark Island. It was a sensational exhibition by the teams and has set the scene for the seven more great races to be sailed in the regatta. Races 3 and 4 of the championship will be sailed on Tuesday, March 9 on Sydney Harbour .

Spectators can follow the racing on board the club’s spectator ferry, however due to the COVID-19 policy, numbers are limited.  Booking online through the club’s website www.18footers.com is essential. https://www.18footers.com.au/18-footers-sailing/spectator-ferry/ .