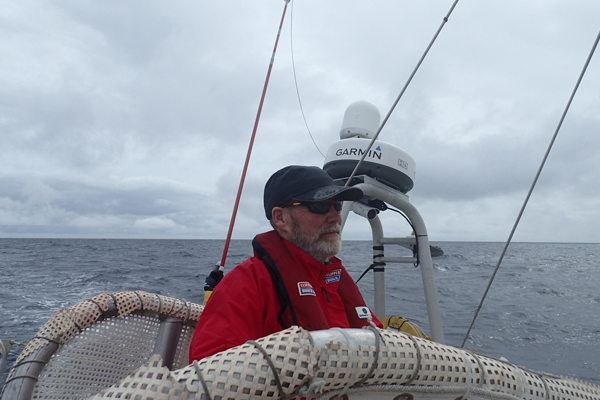 It has been a day of mostly frustratingly light and unstable airs on The Sailing City • Qingdao Cup to China, with a dying breeze.

Garmin, which was leading the fleet yesterday, is now in Stealth Mode until 1150 UTC today, and  Derry~Londonderry~Doire, which was chasing hard and closing the gap, will be off the radar until 2350 UTC tonight, when all will be revealed.

However there will be cause for celebration on board Derry~Londonderry~Doire, with the Northern Irish entry winning an extra two bonus points for its performance in the Ocean Sprint. Its time of 18 hours and 36 minutes is unbeatable by its rivals still to declare their times.

The result is provisional until verified upon the arrival of the yachts in Qingdao. PSP Logistics,  ClipperTelemed+ and Unicef have not declared their finish times yet, but all three have exceeded  Derry~Londonderry~Doire’s time.

Ash Skett, Skipper of Garmin, described the constant trimming and adjustments to sail plan in the area of highly unstable winds, with the added pressure of rival Derry~Londonderry~Doire close by.

“This morning bought a big change in the conditions as a huge front came over. The clouds associated with the front were quite spectacular and it looked like a scene from Independence Day as it rolled overhead. However, instead of a large UFO emerging out of the clouds, it brought with it just darkness and then a sudden drop in wind, almost to zero knots. This concerned me, I knew something big was coming so immediately called for a spinnaker drop. Sure enough, as I give the command, the wind swung 180 degrees and started to build.

“This backed the kite against the staysail which helped us to get it on the deck quickly in a kind of 'kiwi drop', and then immediately stuffed down through the forehatch as the wind started to build more from the north. Disaster averted, the next few hours went very quickly. Reefs we put in and shaken out as we trimmed constantly due to very fickle wind direction and speed,” Ash added.

Olivier Cardin, Skipper of LMAX Exchange, said that over the last 24 hours, after the Ocean Sprint, it was time to focus on the Scoring Gate.

“It works (perhaps not only with that but it helped) as we were ahead ofQingdao in the morning report.

“We have stayed focused all the morning with our windseeker, dealing with about 4 knots of wind we managed to make the difference another time over Qingdao and GREAT Britain,” Olivier added.

A front is expected over the next day which will bring squally activity, after which, conditions will ease again.

Finally the teams have been wishing their Mothers a happy (UK) Mother’s Day in their crew and Skipper blogs today.