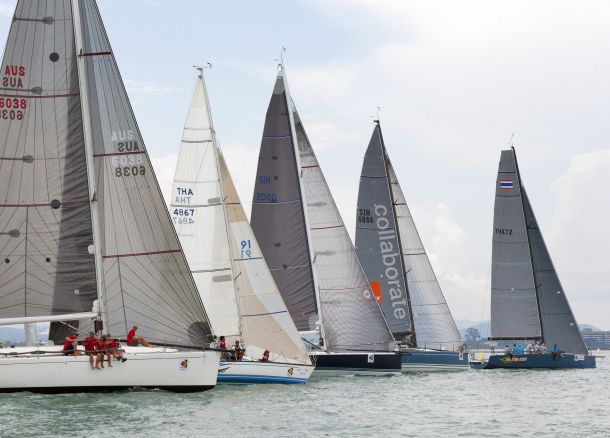 PATTAYA, Thailand – There was some shuffling of the results overnight as the results of a series of protests on Day 2 made for a tense start on Day 3. Fujin were DQ'd from Race 3 after not turning up to hear the protest against them which saw Foxy Lady VI bumped upto first in that race, while over the dinghy course a protest in the single-handed monohull dinghy fleet saw Laser Radial sailor Apiwat Sringam, was DQ'd from Race 3 something she would later come to rue.

A full day of racing yesterday saw most fleets back on schedule and while the wind started light today it did not deter the Race Officers.

In the Platu class, the Thai crew on Le vent 2 (THA), lead by Wiwat Poonpat, placed well on Day 1 to top the standings at the end of the day, yet struggled yesterday in the stronger breeze. Sailing with a crew of four, they are clearly underweight for the strong conditions and today all eyes were on Kingdom Property (AUS), skippered by Scott Duncanson, to see if he could continue his winning streak from the day before. And he did.

A huge two minute winning margin in Race 1 was a clear signal that they were not concerned – whatever the conditions. Languishing in the bottom half of the class for most of the Regatta, The Ferret (THA) sailed well to score a solid second place while another Thai crew, Pine Pacific (THA), placed third.

In Race 2, The Fox put in a good performance to secure the win – their second of the series – while Le vent 2, clearly enjoying the lighter breeze, finished second. A third for Kingdom Property, however, had little to impact on their commanding position at the top of the standings, leading by 13 points after the discard, and with just one day to go.

Two races were completed for the IRC and multihull classes and a single distance race for Cruising, and as the wind dropped off the Race Management team were kept busy shortening courses.

Steve McConaghy and crew on Foxy Lady VI (SIN) who, after a slow start to the series, are now upto speed, scored a 1,2 today bringing their series wins to three and with it putting them top of the overall standings.

A 3,3 was not the desired scoreline today for EFG Mandrake (HKG) today, however, they remain in second overall ahead of Wan Ma Rang (THA).

Iolanthe (AUS) returned to their winning ways in IRC Racing 2 with a win in Race 1 ahead of El Coyote, while just off the pace was Amanda (SWE) who finished less than 30 seconds behind on corrected time. A surprise win for the all-Thai crew on Windstar (THA) in the second race brings them with reach of an overall podium position heading into the final day with Amanda still heading the standings after their 3,2 today.

Sonic turned the tables on close rival Cedar Swan (THA) in Race 1 of the Ocean Multihulls and finished a clear three minutes ahead on corrected time. Another win in the dying winds of the second race takes Sonic to within one point of Cedar Swan while two third places for License to Chill (AUS) on the day leaves them in third overall.

112 youngsters raced over over three days, in some testing conditions, for the Thailand National Optimist crown. Celebrating its 40th anniversary this year, the second oldest sailing trophy in the country is the pinnacle of youth sailing in Thailand, and after eight races this year it was the consistency of Suthon Yampinid with seven wins that saw him crowned 2015 Thailand National Optimist Champion.

Also finishing their three-day series today were the dinghy classes and on the final day, Race Officer Simon James worked them hard with three races for all. Leading at the beginning of the day, Keerati Bualong (THA) performed impeccably to reign victorious adding three more wins to his total and defending his single-handed monohull dinghy class title.

With an almost perfect score-sheet in the double-handed monohull dinghy class it was Sarawut Phetsiri and Puvich Chanyim (THA) who discarded their fourth place finish earlier in the series to count eight firsts and take the title. Second place went to Alif Safares Bin Azmi and Amirul Mukminin (MAS) with the female team of Chaninart Poolsirikot and Piriyaporn Kangkla (THA) in third.