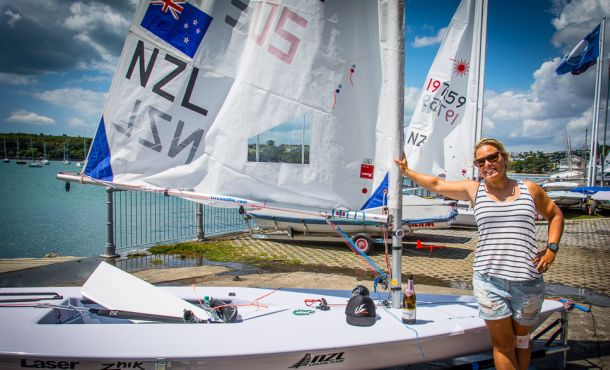 Oceanbridge Sail Auckland registration for sailors and coaches has begun at Royal Akarana Yacht ahead of the four-day regatta. 194 boats across 17 classes will race on the Waitemata Harbour spread among four courses, making this event one of the largest Olympic, Paralympic and Invited classes in New Zealand.

“I christened the boat this afternoon so now I’m ready to race,” said Winther. “The radial fleet is looking hot and it’s going to be hectic few days but I’m looking forward to the challenge.”

Event Director Simon Manning was eager to get the event underway. “It’s not often that our young sailors get the chance to rub shoulders with their Olympic hero’s but Oceanbridge Sail Auckland offers that experience,” said Manning.

The competitors briefing starts at 1900 hours in the RAYC Hyundai M-Class Lounge. Racing kicks off at 1100 hours Thursday 26 February and continues through to Sunday 1 March.

This regatta is made possible only thanks to the contributions from principle sponsor Oceanbridge and supporters Danske Mobler, Yachting New Zealand, Sport New Zealand, Pump Water, Zhik, The Landing, Orakei Marina and most importantly, a team of more than 80 volunteers.

Oceanbridge Sail Auckland 2015 will take place at the Royal Akarana Yacht Club from the 26th February – 1st March 2015. The NZL Sailing Team are anticipated to feature strongly in what is the biggest Olympic and Paralympic class regatta in New Zealand, and alongside them will be New Zealand’s top developing youth sailors and keen competitors in a range of invited classes such as the OK Dinghy.

Over four days of racing 11-15 races will take place for each fleet, and the format for all classes will be fleet racing with no medal race. All racing will take place in the Waitemata Harbour, in the surrounds of Rangitoto Island, North Head, Mechanics Bay and Browns Island.