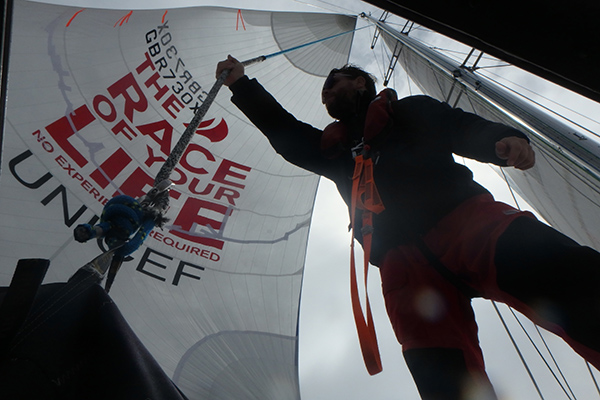 Dawn yesterday was greeted with the launch of spinnakers and concluded at dusk with a set of gybes described as resembling a carefully choreographed ballet.

PSP Logistics Skipper Max Stunell captured the scene: “It's synchronized sailing out here with various people taking the lead… At first light this morning kites popped one by one and within a matter of minutes the horizon was filled by billowing white sails and so remained all day in a moderate breeze making good progress with all new crew getting their first chance helming under kite.”

Ash Skett described how Garmin led the flurry of gybes after a welcome return to perfect downwind sailing: “Nothing much separates the fleet right now as we all follow the same line, as far south as the wind direction will allow. The distance between the boats is sure to increase in the near future. We gybed and set off a chain reaction, the other seven boats around quickly followed suit so now we are all still in a tight group as we march on into the night!”

The majority of the fleet is in a tight group about 15 nautical miles square closing on the US west coast, around 100nm to the east, some 200nm south of Seattle.

Interestingly IchorCoal was further inshore and, although not quite as far south as the main group, its proximity to the rhumb line race track actually put it in the lead with the shortest distance to finish at 0600 UTC. But as it converged with the rest of the fleet it dropped to fourth by 0700UTC.

Looking at the leading edge of the main group it’s clear that the pressure is on to maximise points to make the final podium with just five races left in the tenth edition of the Clipper Race.

Derry~Londondery~Doire appears to be in a tight duel with LMAX Exchange in a bid to further narrow its lead, now down to nine points.

Skipper Dan Smith reports: “Last night was spent trimming sails hard, trying to stay near the front, which we managed well…Before dawn broke conditions had become favourable for a spinnaker so up it went…At dawn the fleet around us showed themselves and up went their spinnakers too…Racing has been tight with the majority of the boats visible on the horizon.”

Meanwhile LMAX Exchange has taken a small 0.05nM lead after working hard. Olivier Cardin explains: “We peeled two times, we gybed three times… just after dinner all the fleet gybed on port tack to come back by the Californian coast. All the team is picking up on kite trimming: Grind! Hold!”

As competition intensifies the Scoring Gate and Ocean Sprint bonuses will be even more highly contended for valuable extra points. However, to counter these potential ladders there may be some snakes lurking with penalty points yet to be applied for sail and equipment damage incurred in the gruelling North Pacific leg.

Unicef appears determined to continue its change of fortunes with a much stronger performance following its second place into Seattle. While it is out of contention for the overall podium they can have a big impact on the leading teams’ fight for points.

Skipper Martin Clough said: “A close knit race so far is keeping us all focussed; I have a feeling that it could be another match race again!”

Qingdao has lost some ground on the leaders now only 2nM ahead of Mission Performance and GREAT Britain, with Da Nang – Viet Nam, PSP Logistics and Visit Seattle a few miles further back. ClipperTelemed+ is playing catch up 100nM behind after a delayed start as a result of a time-consuming repair to its mast track.

With around 3600 nautical miles to go to Panama in the PSP Logistics Panama Cup, stay tuned to the Race Viewer to follow of all the action, on the hour, every hour.

If you are inspired by our crew and would like to take part in the 2017-18 or 2019-2020 editions of the Clipper Race, contact our recruitment team to find out more.