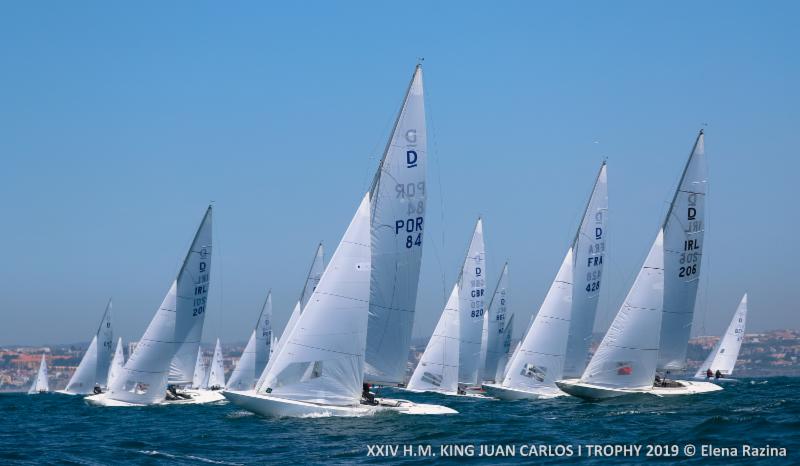 Cascais, Portugal – The competition at the Dragon HM King Juan Carlos Trophy in Cascais is really heating up with the top five boats now separated by just three points going into the last day of the regatta.

On Day three races five and six of the eight race series were completed in 13 to 18 knots under clear blue skies. Two more race winners came to the fore, meaning that there have now been six winners in six races. Even by the exceptional standards of the Dragon fleet, the competition is exceptionally close and with two races still to go the regatta remains wide open.

Once again the fleet struggled with the current on the start line and once again the race committee employed first their Uniform and then their Black Flag to get them underway.

In race five overnight leader Grant Gordon from Scotland and third placed Jens Rathsack of Monaco were both over at the start and had to pull out of the race. For those still racing it was nip and tuck until the third run.

Multi-Championship winning Dragon legend Lars Hendricksen, crewing this week for Dutchman Pieter Heerema, takes up the story: “At the start the pin end was favoured. We nearly won the pin, but didn't quite make it. We went out to the left and then crossed behind the fleet going to the right side.

“We took a few shifts out to the right and came into the first mark in fourth. For the next couple of legs the boats were fighting closely, but on the third downwind the boats that went left went right into this shadow behind the mountains, so there was a kind of vacuum and we saw that when we were in fourth or fifth position, so we basically gybed away, took a big circle around the fleet and we were leading.”

Heerema then held that lead for a confident race victory from Germany's Otto Pohlmann. Peter Gilmour sailing for Japan finished third, clearly demonstrating that his boat was none the worse for her night spent underwater, Frenchman Gery Trentesaux took fourth and Russians Dmitry Samokhin and Anatoly Loginov were fifth and sixth respectively.

Portugal's Pedro Rebelo de Andrade crossed in seventh, making him the only boat still holding an all single digit scoreline, and Switzerland's Hugo Stenbeck was eighth.

Going into race six Heerema now held a one point overall lead from Loginov. Andrade lay three points further pack in third and Gordon, Stenbeck, Samokhin and Rathsack were all within three points of him.

Again the fleet was over eager at the start of race six, but this time the leading group managed to stay out of trouble. Having been excluded from race five Rathsack came back with a vengeance to take first place ahead of Samokhin. Switzerland's Hugo Stenbeck slotted into third and Trentesaux took his second fourth place of the day. Gordon was fifth and Loginov sixth.

In the overall standings Anatoly Loginov will start the final day of racing on twenty-five points, with a single point lead over Jens Rathsack. Hugo Stenbeck and Dmitry Samokhin have twenty-seven points apiece with Stenbeck taking third on countback, Grant Gordon sits on twenty-eight points and Pedro Andrade is in sixth with thirty points. Heerema had something of a shocker in the sixth race finishing, knocking him firmly off the lead and down into seventh overall, four points behind Andrade.

In the Corinthian Division Portugal's Miguel Magalhaes has strengthened his lead, while Belgium's Guy Celis has moved into second place, leapfrogging over Manuel Rocha who was protested and penalised for a start line incident in race six and down to third.

The regatta concludes tomorrow, Saturday 4 May, with a maximum of two further races possible. The first start is schedule for 11.00 and there is a final warning signal cut off time of 14.00. With so much to play for everyone will be hoping that the wind gods cooperate and both races can be completed.