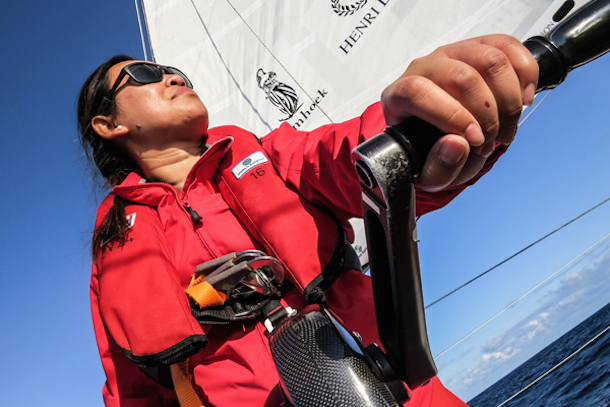 Race leader LMAX Exchange is set to cross the Scoring Gate this afternoon and claim the maximum three bonus points on offer.

GREAT Britain, in second place, and Derry~Londonderry~Doire, in third position, are fighting for the further two and one points on offer, with Qingdao in fourth and Garmin (currently fifth) further east also potentially able to claim the points.

The Scoring Gate is a line between two points at 19N 26W and 19N 23W and it is not compulsory to cross it.

Garmin Skipper Ashley Skett said his team had an important decision to make on board in the fight for potential bonus points.

“Do we go for points at the Scoring Gate or head straight to Rio? We have more distance to make up than both Derry~Londonderry~Doire and GREAT Britain, but potentially more wind which may get us there slightly ahead,” he said.

“After much discussion a decision was made and a plan put into action. We also have Qingdao to think about, currently way off on our port side, making steady progress south but further from the rhumb line than us. We have consistently swapped ranking during each of the last four or five position reports (which we receive every six hours) and although I believe it's too early to put too much faith in the 'distance to Rio' measurement to calculate the rankings of the boats, it's interesting as it shows how close things are at the minute.”

The fleet is making steady progress with all of the yachts now through the Canary Islands, with Da Nang – Viet Nam further west on the course, leaving the islands to its port.

The northern yachts could get squallier, gusty weather with the incoming trough visible, and the southern teams will also see more tropical squalls appear, according to Clipper Race meteorologist Simon Rowell.

Skipper Max Stunell summed up the last 24 hours on board PSP Logistics.

“We had great fun blasting past Lanzarote and Fuerteventura in the baking sun. I was expecting a bit of an acceleration zone between Gran Canaria and Fuerteventura so we swapped early to our medium weight spinnaker, but found the wind and sea state developed further and so the heavyweight kite came out of its bag for the first time ever!

“Even that proved to be too much of a handful in the confused sea at night and so got returned to its bag fairly promptly and a reef went in. As we move away from the Canaries the sea is smoothing, the wind is becoming more constant and more sail is going back up. We are prepping to hoist again for the drag race to the Cape Verde Islands. It's fair to say that it’s been quite a busy day and I've put the crew through its paces!”

Will GREAT Britain, Derry~Londonderry~Doire, Garmin or Qingdao claim the extra bonus points at the Scoring Gate?