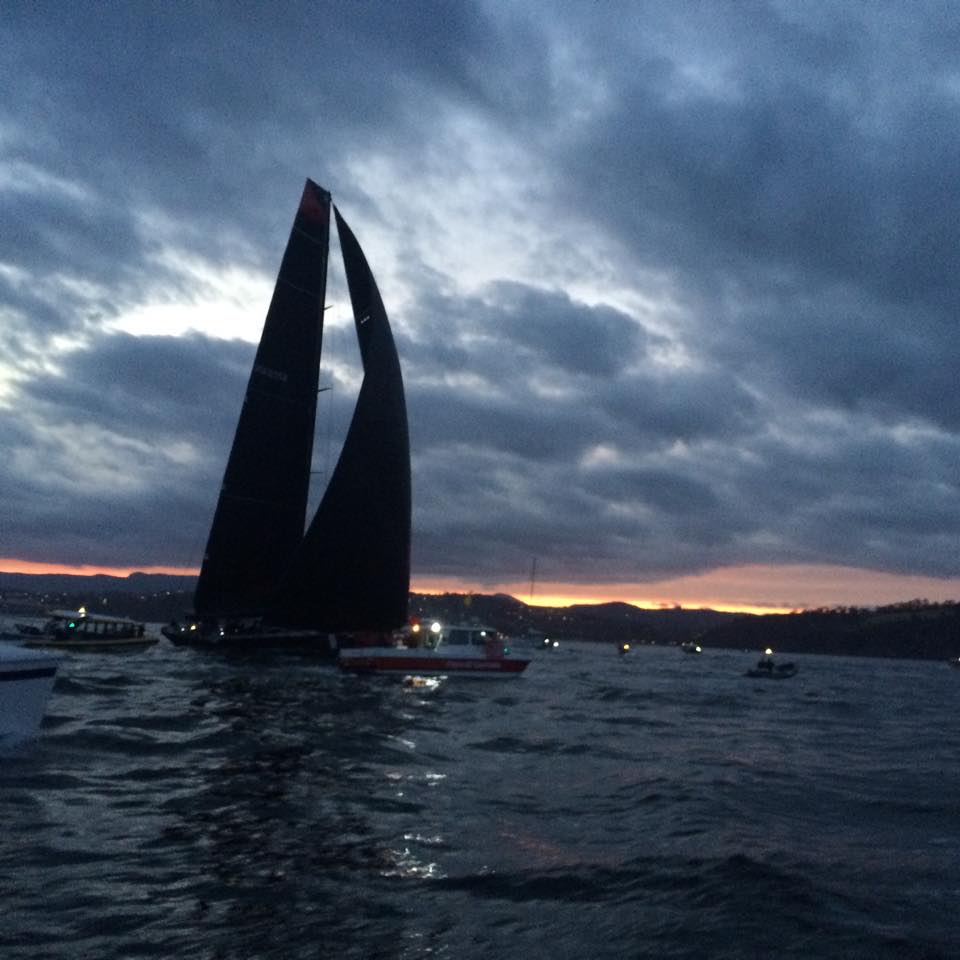 She is almost certainly the first yacht to retire from the race then go on to win it.

Comanche was led out of Sydney Heads by Perpetual Loyal but she then took the lead and vanished down the coast at great speed under spinnaker. However, when the southerly buster hit on Boxing Day night, so did disaster. While surfing at around 20 knots, the boat hit “something” and seriously damaged the daggerboard.

The daggerboard was broken off and in an attempt to stop it from damaging the boat, they had to cut the ropes and set it free. It then hit the rudder and took out their steering system. They had the sails down and were drifting, then the tools came out. “Tools came out and when tools come out that is a good thing,” Read said.

Skipper Ken read radioed race headquarters to say they were withdrawing. But a conference on board convinced them they could continue. Albeit gingerly.

“We came here to finish,” Read told the media centre by satellite phone. “One way or another we’re going to finish this damn race – we’ll limp across the finish line. Even if we’re paddling we’ll be there.”

True to his word, Comanche set off in pursuit of Rambler 88 which had overtaken Comanche during the night. Rambler also had rudder problems and Comanche regained the lead at 1pm on Sunday December 27.

Read explained that the team was different from last year and were happy to be celebrating their victory when asked about Wild Oats XI. “We have the fastest 100 footers in the world,” he said.

“I don't know who Wild Oats is. We are here to celebrate Comanche.”

Meanwhile, behind them nearly a third of the fleet pulled out of what has been described as the worst Hobart since 2004. Casualties among the big boats included defending line honours champion Wild Oats XI (torn mainsail), Perpetual Loyal (rudder damage) and Black Jack (crewman with a broken leg).

As conditions went light between Gabo Island and Tasmania, somehow Comanche maintained her own private wind and extended away from everyone except Rambler. Standing well out to sea she was able to stay on her preferred port tack for almost all of the day before ducking around Tasman Island at 5.10pm. She now had only 40nm to go and was still sailing at more than 10 knots while Rambler fell away, barely able to manage 3 knots.

Just when it seemed Ken Read had a deal with Hughey the weather god, Hughey did his usual foul trick and stopped the wind. Comanche shuddered to a halt 4nm SE of Cape Raoul. The set-back was temporary and she was soon underway again but at a reduced speed of around 8 knots.

Then the wind shifted, she had to gybe over on to starboard but at least she wasn't hard on the wind. The speed crept up. At the Iron Pot, 12.5 knots. Only an hour to go to scallop pies, champagne and hot showers?

Surrounded by her support crew (including several in Indian headresses), media boats and a huge spectator fleet, the red hull contrasted with the black sails. The crew, all totally focussed, were sailing her hard to the line.

Another gybe on to port and the damaged rudder and broken daggerboard were exposed to view. With 5nm to go, a crewman was sent up the mast to look for wind. Kenny was taking no chances of a last-minute stall. The pressure dropped, as did the speed. It was necessary to go almost to the western shore of the river to find a zephyr of breeze. Darkness fell and the nav lights were switched on. The big boat limped up the river at less than 5 knots. One hour from the Iron Pot had become nearly two.

Finally, at 90 seconds before 10pm history was made. The gun was fired from the RYCT finishing tower on Battery Point and Comanche had a famous victory. It had taken a gruelling 2 days 8 hours 58 minutes and 30 seconds.

It has been a remarkable win for a remarkable yacht and a remarkable crew. Almost brand new when she entered this race last year and finished second to Wild Oats across the line, she has undertaken a gruelling offshore schedule this year which included the treble of line, record and overall win in the 185nm Block Island Race. She also set a new 24 hour monohull speed record in the Transatlantic Race, covering 618.01 nautical miles (25.75 knots average), nearly the equivalent of the Sydney Hobart distance of 628 nautical miles. Just to rub salt into the wounds of other ocean racers, she took line honours in the 2015 Fastnet Race despite it being a drifter, conditions which don't suit the broad-beamed design.

Her skipper, Ken Read, is the CEO of North Sails worldwide, a multiple Volvo Ocean Race competitor and an excellent ambassador for sailing. He said when Comanche was launched that she was built to promote the sport and everything he and the big red boat have done since has been true to that claim.

However, a true red-head, Read is also a very competitive man. The loss to Wild Oats last year hurt and although the original plan was not to do the Hobart again until 2016, here they are.

I was at a media conference in Galway at the finish of the 2012 Volvo Race and Read's PUMA had already wrapped up the in-port trophy without needing to sail the final race. When a journalist asked him if he would consequently be taking it easy, Read gave more than a glimpse of what drives him: “If you organised a race down the hallway with these guys (indicating the other skippers), there would be blood. That's who we are. That's what we do,” he said.

His crew on Comanche is equally well-credentialled and equally competitive. None more so than two-times America's Cup winning skipper, and another red-head, Jimmy Spithill. Navigator Stan Honey won the Hobart race on Perpetual Loyal in 2011. There are too many America's Cup campaigns and Volvo Ocean Race voyages among the rest of the crew to count.

While Australians may be disappointed that Wild Oats was unable to finish the race, they can take consolation from the fact that Comanche is a worthy winner.

As it turned out, Kenny Read and his crew didn't have to paddle across the finish line. But you know they would have done, if it had been necessary.