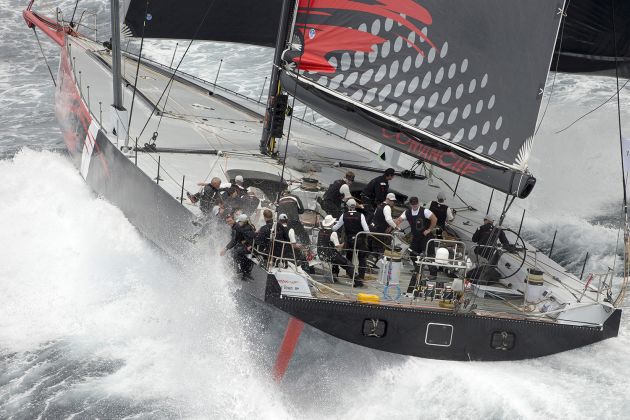 As the entire fleet in this year's Rolex Sydney Hobart stalls in light airs, it seems that Kenny Read, skipper of the American supermaxi Comanche, has whistled up his own personal wind.

At 5.10pm EADT, the big red Indian passed Cape Pillar and sailed into Storm Bay leaving her just 40nm to go to the finish line in the Derwent River. Comanche is badly injured, with a damaged rudder and daggerboard that makes sailing on starboard tack difficult and inefficient. But for most of the day she has had the wind on her port side and it has now swung to be almost on her beam.

As she entered Storm Bay, she was maintaining a good speed of 12.8 knots, giving her an expected finish time of just before 9pm.

Her nearest rival, another American yacht Rambler 88 which is also nursing rudder damage, looked to have a chance of pipping Comanche but she has been falling off the pace and has slowed to just 2.5 knots and is now over 35nm behind.

The race for the Tattersall's Cup, presented to the winner on corrected time, will change dramatically over the next two days. The back-markers, currently all but becalmed off Gabo Island, are sure to pick up some wind and move up the rankings.

But there is a good chance that Comanche will be at the top of the IRC leaderboard when she finishes. She is currently second only to the small wooden yacht from South Australia Enchantress, which holds her lead only because she is so far behind she is still sailing in the residual wind on the NSW south coast. As she enters the light wind area that is bedevilling the bulk of the fleet, she will slow dramatically and lose ground to Comanche.

Then it will become a race of attrition. The Comanche crew can have their hot showers and a cold beer, then wait for an agonising period until the handicap situation becomes more clear.

However, barring another bizarre twist in this already extraordinary race, they can celebrate their line honours win and the fact that Comanche is the first American yacht to be first across the line in this race since Larry Ellison's Sayonara in 1998.

We will post updates on our Facebook page as Comanche closes on the line and will have a report on the finish, with photographs from Kimberley Montague, shortly after the finishing gun is fired.