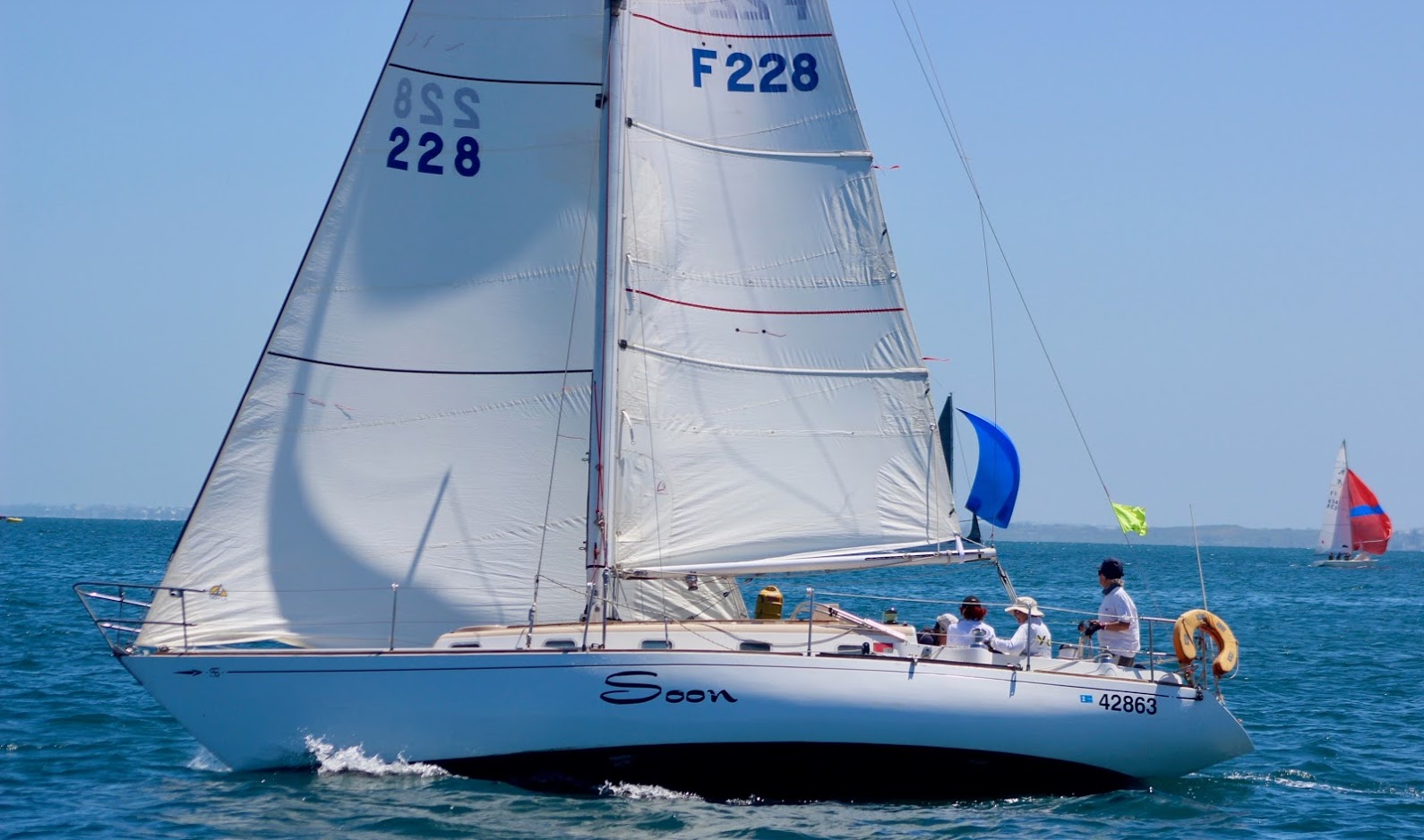 Soon was the overall winner of the Cockburn Sound Regatta 2018.

The Cockburn Sound Regatta is a four day event held between Boxing Day and New Year’s Eve on the beautiful and protected waters of Mangles Bay off Rockingham, Western Australia.

The Kwinana Industries Council Race from Fremantle to Rockingham is the feeder race for any metro based yachts and this year 19 made the 14 nautical mile trip down to join the rest of the fleet.

Nineteen yachts fronted up to the start line to be sent off in a combined start by Principal Race Officer Trevor Milton and his offshore crew.  Conditions were perfect with a 10-14 knot SSW breeze making for beautiful sailing condtions, albeit mostly upwind.

Ralph Newton’s beautifully restored Fife 36 Linear Rater Eun na mara showed the newer boats how to point upwind and won the race by 25 seconds on corrected time from The Longboat, skippered by Ole Oetness. Eun na mara’s sail number is SP1907 reflecting both her club and the year in which she was born. Greg Hill’s Pescott Firefly 850 catamaran took out line honours from the Sydney 36 Endorfin skippered by Michael Giles.

Following the experience of last year’s regatta when most afternoons’ racing was blown out due to a persistent southerly air flow, the schedule was kept deliberately flexible by the race committee and competitors were canvassed each night to see what their preference was for the following day. This worked extremely well with all fleets enjoying a variety of courses and from 7-10 races over the 4 days of the regatta.

Forty-three boats were divided into seven fleets and the conditions were perfect, with the sun shining, flat water and the persistent south westerly sea breeze not getting above 22 knots. The bigger boats opted to sail without spinnakers and so Divisions 1 and 2 were combined to form a fleet including two Etchells, a Farr 9.2, a Spider 28, an Elan 350 and the aforementioned Eun na mara who won the division. Will Grauaug’s Spider Venomous wore a 2 point penalty for interfering in another fleet’s starting sequence which meant the difference between 2nd and 3rd. Fat Wallet Lost, skippered by Michael Sproxton was 2nd.

Division 3 was the closest finish of all with Sam Threlfall’s Swarbrick 20 Lady Irene winning by 1 point from Wildfire (Bruce Uren) and a further ½ point to Ally Mounsey’s Lokman.  Lokman beat Wildfire into 2nd place in the last race which gave Sam the overall win and ensured the trophy remains local.  Someone owes someone else a jug.

The Longboat won JAM1 on a countback from Peter Cochrane’s Beneteau First 36.7 Raya and there was another countback to separate 3rd from 4th.  Barry Walsh’s Beneteau First 44.7 Twitch held off Ian Joel’s Dixon 46 Jubilant who unfortunately suffered some serious damage in a collision during the last race.

Four Multihulls made the trek down and this Division was won by Whip It (Greg Hill), Ken Woods’ Farrier TrailerTri 720 Louisa and last year’s winner Renegade skippered by Ron Stokes.  This Corsair 750 was a little unlucky missing a couple of starts.  Only 3 boats entered for the Sportsboats Division but they made for interesting racing as they were all Elliott 7s.  Gavin Taylor’s river based boat Tiger proved to be a class above taking out fastest time in all 11 races.  Not surprisingly, he also won the overall prize but the other two, Child’s Play (Ric Fairey) and Need for Speed (Jacob Birch) finished level on points with Child’s Play gaining 2nd place.

Onshore, the Cruising Yacht Club of WA was lively and buzzing with a variety of entertainment organised by Regatta Chair, Sonia Mason.

The overall Regatta Champion was determined by a formula taking into account a boat’s point score and the sum of the total numbers of boats starting in each race in each Division.  It was very close between Tiger and Soon but in the end it was the latter who prevailed.  Competitors headed off tired but happy and mostly promising to be back again next year.