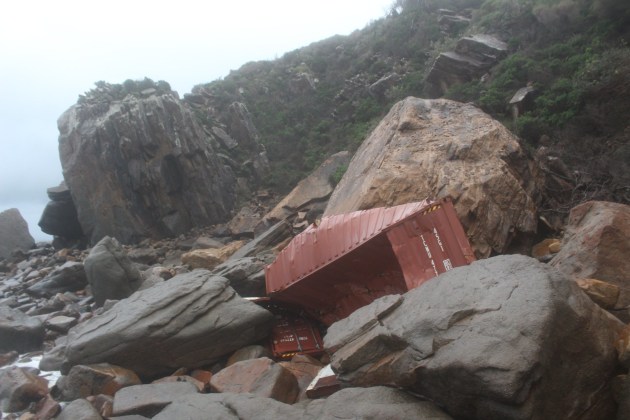 A container washed on to the beach near Port Stephens. Photo RMS Facebook.

Roads and Maritime Services (RMS) in NSW is co-ordinating a coastal clean-up effort in the wake of last week’s loss of 83 containers from a ship en route to Port Botany.

The State Marine Pollution Controller role has now been activated with teams of clean-up crew working to collect debris from the containers which has been coming ashore, primarily in the Port Stephens area north of Newcastle.

As of Monday afternoon, debris had been confirmed at:

Roads and Maritime Services executive director Angus Mitchell said that while it is fantastic the local community has been getting involved and volunteering to help remove debris from the shoreline, it is not encouraged for safety and environmental reasons.

“To ensure we have a coordinated effort to remove the materials which wash ashore as soon as possible, Roads and Maritime is leading an effort involving NSW authorities, including National and Marine Parks, local councils where the material is washing up and federal agencies including the Australian Marine Safety Authority,” he said.

“Continuing bad weather is hampering efforts, but tomorrow the forecast is for the weather and visibility to improve slightly, so divers will be deployed to join the efforts to assess rubbish that may be sitting on the seabed in the vicinity of Jimmys and Hawks Nest,” said Mitchell.

“Boats and specialised beach cleaning equipment from MidCoast Council are also being used to remove debris from the water close to shore in the Port Stephens area.

“A mini dozer known as a Pozzi Track is also assisting the clean-up effort on Jimmys Beach and will be redeployed as required.

“We want to reassure the community that we have no intention of scaling down this clean-up effort until we are satisfied that our waters and coastline are back to their pristine condition.”

The ship which caused the spill, YM Efficiency, is now off Gerroa on the South Coast as it awaits to come into port. Mitchell said the process of unloading the rest of the containers could take up to seven days.

“It is quite a delicate operation, the weather over the weekend did prohibit it coming in to a port and now we are negotiating with the ship’s owners and stevedores as to which berth it will come into to unload the remainder of its containers.”

RMS confirmed that no further containers have fallen off the ship, despite there being another 30 damaged containers on board.

Hourly warnings are being made to ensure ship operators are aware of the potential danger of the containers, which may not be very visible from the waterline.

Drift modelling is being used to predict where the debris – which has been confirmed as non-hazardous – is likely to wash up between Newcastle and Port Stephens. Members of the public are been asked to stay clear of any debris and containers and report to the NSW Maritime Info Line 13 12 36.