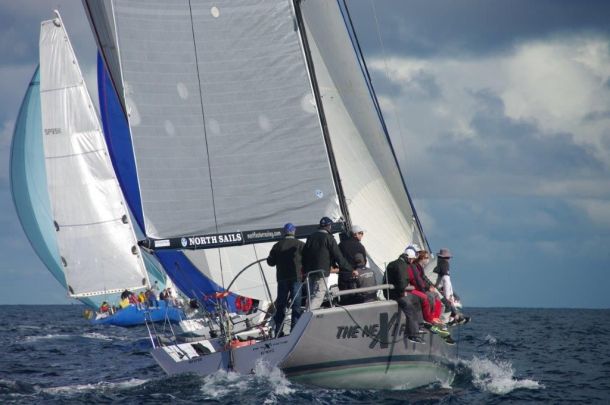 The Next Factor. Photo Susan Ghent.

Very light winds and rain were expected for race day two of the Pantaenius Australia 2015 WA IRC State Championship. The Yachting WA event is being held in conjunction with Fremantle Sailing Club’s Valmadre Series. Thankfully, the sun shone on the fleet and a moderate east to north easterly breeze transpired. It was oscillating, but Race Officer Trevor Milton was pleased to have around 8 knots of wind and got all fleets away to contest the Ensign Race.

Each of the four fleets got away to a great start for the passage race with only one yacht recalled for being over the line early. Unhinged was a bit too keen and was recalled for being over the line at the pin end. Division Two was lively with a few pre start tussles, Argo, Kraken and Prime Factor seemed keen to fight for their territory. It was Cougar who hit the line with good speed and got away a length ahead of the others.

Division One looked majestic in the flat water, all hitting the line cleanly. Syrenka and Finistere were on the line towards the pin end but it was Indian who arrived with good speed beside the start boat in a nice clean lane. The larger yachts soon caught the other divisions and the group turned the Pantaenius day buoy together and set up for a close reach.

The sun broke through the rain clouds and it was a great sight watching the yachts sail west, most with spinnakers flying. All skippers worked hard to find themselves a lane of clear air, keeping an eye on their main competition to ensure they worked their way in to better wind.

In first place overall and on IRC, great sailing by Robert Halvorsen’s Giddy Up. The FSC team placing clear ahead of The X Factor (RFBYC) and By & Large (RPYC/RFBYC) in second and third respectively in Division Two.

Race day two saw a mix up in the positions for Division One. Defending champions on The Next Factor took a win on corrected time. Dave Walling’s team must have had a good team briefing to prepare themselves for the day after coming in so close on race day one. Craig Carter’s Indian sailed well to hold off Calm as long as she could, finishing close and placing second on IRC.

Teams will race again this weekend with a windward-leeward series scheduled for Sunday morning. While the competitors reflect on their day of racing, Pantaenius Australia looks forward to another day at sea. Pantaenius provides comprehensive cover and an all-risk policy for sailing and motor yachts so all can rest easy.