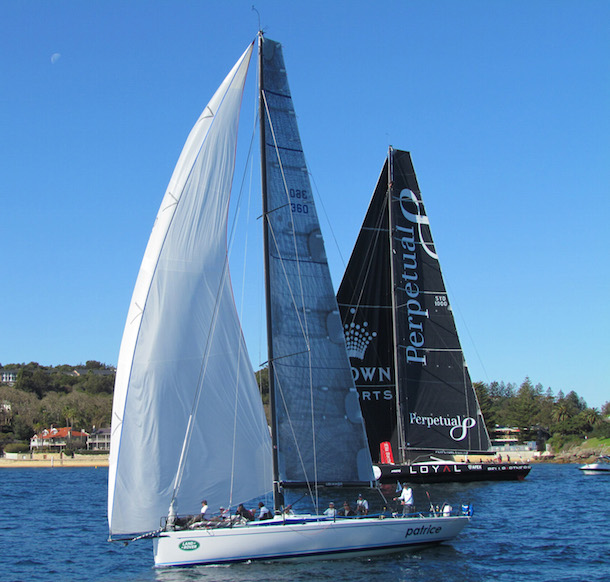 The Cruising Yacht Club of Australia’s 2015 Land Rover Sydney Gold Coast Yacht Race got away on time at 1pm today, but instead of the predicted 10 to 15 knot north-westerly, the 62-boat fleet had to grapple with conditions similar to last year – ultra light and fluky making tactical decisions very difficult.

When the breeze initially failed to fill in, the fleet, under spinnaker or Code Zeros, split. Some elected the western side of the Harbour, others took their chances by aiming up the middle of the course, but the bulk headed to the east side of the Harbour.

Mid line, Black Jack was glued to Perpetual Loyal, mirroring her every movement, before overtaking the larger yacht at Watsons Bay, where Patrice made her move.

As two different breezes built on either side of the Harbour – west at North Head, with a south-westerly off South Head – Bell’s 100 foot yacht eventually caught Patrice just inside North Head, but Black Jack was yet to catch up after earlier leading the 100 footer.

As they left Sydney Heads, Bell’s yacht had a man up the mast bouncing a recalcitrant batten back into place, taking the opportunity to also search for pressure.

Positions were changing by the minute as the slow push up the Harbour turned into a quick dash to the Heads, with the remainder of the fleet spread from North to South Head.

Rod West and his Painkiller Forte crew from Southport Yacht Club must have been suffering a headache or two. The Jeanneau 45.2 was last to leave the Harbour, trailing the backmarkers by 600 metres or more. Off to a shaky start, West’s bet with fellow PHS contender, Les Goodridge (Wax Lyrical), was not looking favourable. But in a 384 nautical mile race, anything can, and does, happen.

Before leaving the dock, crews were buoyant, still marvelling at the beautiful sunny day and looking forward to a decent breeze as they set off from the Cruising Yacht Club of Australia, heading to the start line on Sydney Harbour.

Craig Neil, the owner/skipper of Elena Nova, was itching just to get his RP42 to the start. “We weren’t able to race last year because of our keel, but we have a new keel and all the paperwork’s in order. We’re just looking forward to getting to the start line and actually crossing it – it will be like finishing the race,” he said today.

“I’ve been sailing for 10 to 12 years, but this is my first yacht, and looking at the forecast, we should do OK. I’m looking forward to see how we will go against others in our division, like Patrice, The Goat, XS Moment and Merlin,” he ended.

Roger Hickman said today: “it’s always wonderful when the forecast seems to give an even chance to everyone, and that’s what we have. If the southerly comes to help us smaller boats towards the end, it’s good news, because we’ll get home quickly. But all that glitters may not be gold, because if the big boats get too far ahead early, then the southerly will have come too late to help us.

“The warring faction in the race is the gradient breeze versus the sea breeze today, but tonight when it gets cold, everything should settle down and then we’ll see what’s what.

“If you look at Division 3 alone, where we are, they are a lot of boats that could win. Boats like Ariel (Ron Forster’s Beneteau First 40), L’Altra Donna (Andy Kearnan’s Summit 35), JustADash (Phil Dash’s Beneteau First 40) and Papillon (Phil Molony’s Archambault A40cr) – and that is our focus.

“This will be a race within a race,” Hickman predicted. “There’s the big boats, then the TP52’s, Cookson 50’s and the Farr 55 (OneSails) in the second group and us smaller boats in Division 3.”

For all information on the Land Rover Sydney Gold Coast Yacht Race, go to: http://goldcoast.cyca.com.au/