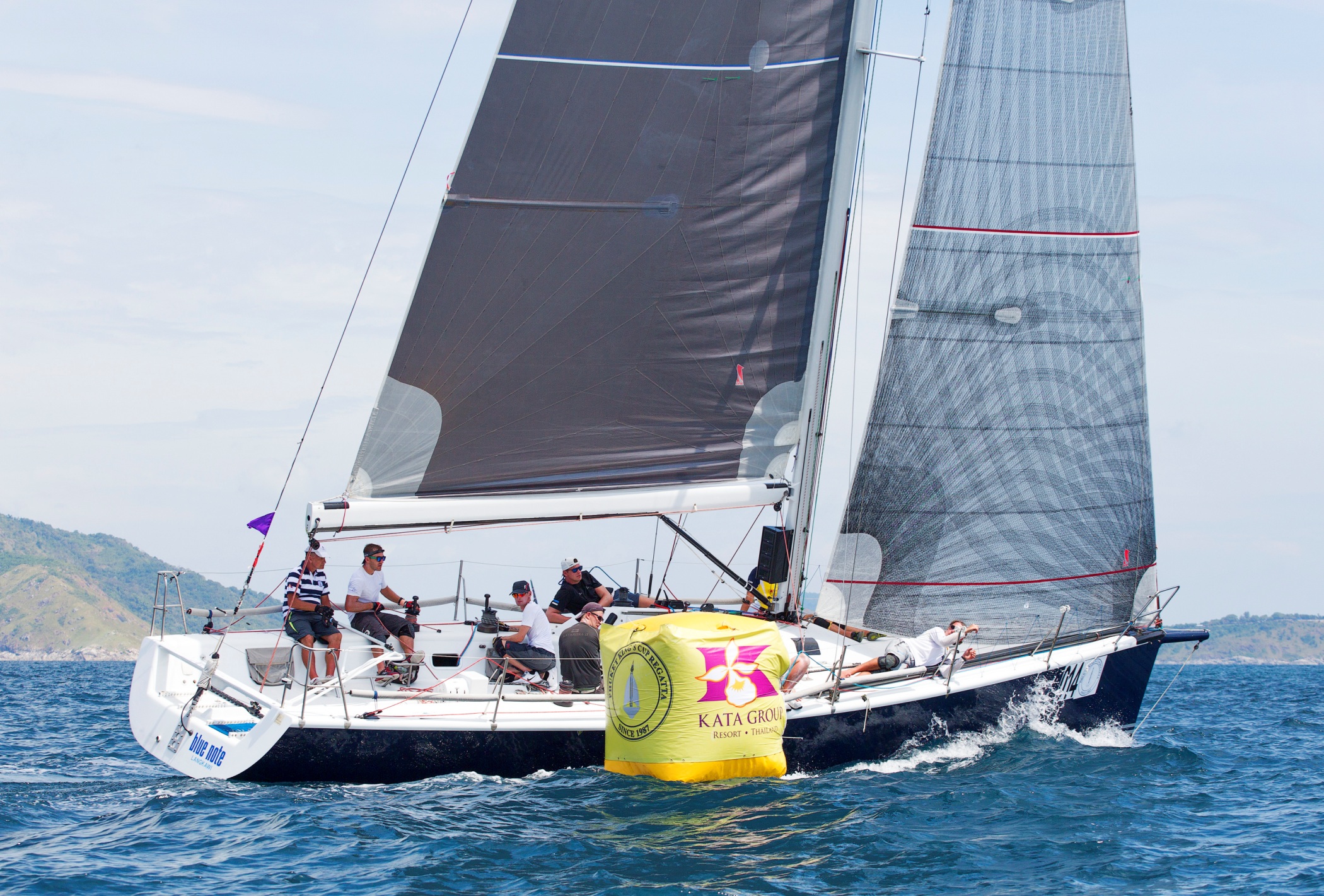 8 December, 2015, Phuket – Following the opening day’s beautiful sunshine and reliable winds, day two threw up a markedly different challenge, demanding a very high work rate from sailors. The light wind did indeed betray yesterday’s fastest runners at times, adding its own twist to the neck-and-neck finishes that are unfolding across almost all of the classes. This has been a great opening to what’s shaping up to be an exceptional Phuket King’s Cup.

Sarab Jeet Singh and the Windsikher II team kicked it up a notch from their two runner-up spots yesterday with an excellent victory in the third race of IRC0. The pack of Australian runners and riders challenging from behind could not match the team’s performance in these light conditions. In race four, Ray Roberts skippering Millennium Racing overcame its handicap to win ahead of Sarab’s team in second; Windsikher II struck back in race five to comprehensively reclaim day two of the Phuket King’s Cup Regatta.

Races three to five in IRC1 saw two Singaporean sail numbers jousting for top position; Blue Note and Rerefine, ahead of a dense and aggressive pack snapping at their heels. Matti Sep skippering Blue Note was quickest in race three, with just four minutes separating the whole fleet on elapsed times. In race four, they were runners-up behind Kenn Eyears skippering Rerefine. Blue Note took race five, the last of today, again with close finishing throughout the Class.

Roland Dane’s Jessandra II team was on great form to win again on day two in IRC2. They bested their closest rivals in race three, Japanese entry Karasu, although not by a huge margin. This one will remain extremely competitive until its last breath, with close finishes expected each day. Karasu raced well in the second and third races of the day, showing power and indomitable spirit – and benefitting from a handicap kinder to Karasu than its rivals.

In Premier Class it’s a battle of the X55’s with defending Champions Pine Pacific making it look easy so far. Another win today starts to cement the basis of their Regatta claim in the early stages, although there’s more performance to come from rivals, perhaps.

Bareboat Charter Class comprises a fleet of 14 traditional shallow draft bareboat yachts, including four Japanese teams and seven Russian teams. Andrey Novikov skippering Alexa were quickest again in race two, with another Russian team, Isabella, coming in second place after being defeated by a heavy handicap. Race three went to Alexa too. The Regatta’s most popular class is proving it can deliver the exceptional levels of competitive spirit and accessibility it was designed to promote.

The Royal Thai Navy entry, Thai Navy 1 skippered by Cpo.1 Wiwat Poonpat, was victorious today in Modern Classic Class, marking a fitting tribute to the sailing prowess and inspiration of His Majesty the King of Thailand. The Thai Navy sailors were exceptional today, coming home in first place and remaining winners on corrected times following handicap correction in both races. Thailand continues to bloom as a natural home for fostering superb sailing talents, with the Royal Thai Navy, the Phuket King’s Cup Regatta and its numerous supporting partners and sponsors dedicated to growing the sport of sailing in Thailand.

Cruising Class today offed up a new winner in the shape of British-registered entry Rogue, skippered by Alan Hogg. Previous Champion Lady Bubbly could only manage 9th today in race 3 on a seeming uncharacteristically challenging day. The second race of the day was awarded to Mohawk skippered by Tony Byrnes.

There are only two boats competing in Classic Class this year, Vintage 6r4 yacht Selma and Japanese new build Umeboshi. Both boats finished today, with Selma a long way in front (on similar handicaps).

Firefly 850 Sports Class is a fleet of five past winners, and today it was Twin Sharks skippered by John Newnham who beat Hans Rahmann’s Voodoo to the top placing for all three races. An extremely competitive (and fast) field will be trading blows all week, as attacks could come from a multitude of directions, but Twin Sharks looks to be rock-solid pacesetter so far. It will need a massive effort from Rahmann’s crew if the British team are not to run away with things early. The 850’s served up one of last year’s most entertaining Class battles, with war continuing seemingly without interruption into the 29th Phuket King’s Cup run.

Among the Cruising Multihulls, Cruising Cats ranging from 38ft to 67ft competed in a very open field of entrants. Grant Horsefield skippering a boat named Arabella’s Naked Dad took the win, with familiar King’s Cup competitor Star Fruit in second. Japanese entry Minnie could not match their outstanding form from last year’s Phuket King’s Cup, but will likely come back hard tomorrow to attempt to overcome their considerable handicap.

The new Performance Multihull Class consists of five new Corsair Pulse 600 yachts on only their second outing. Sudu3 skippered by Elizabeth Schoch won brilliantly in a class with no handicaps, leading to classic one-make series action – and absolutely no margin for error. Multihull Solutions H3O took race 3, with another tight finish at the conclusion.