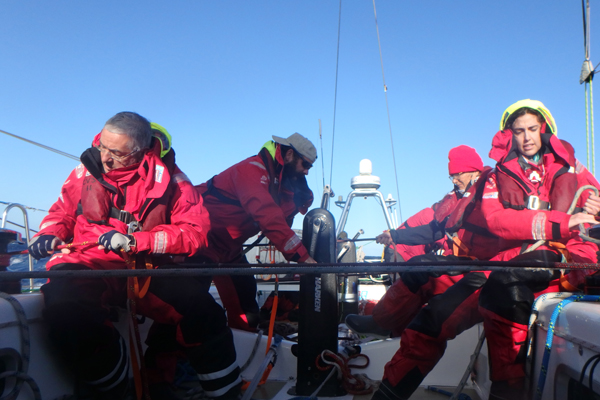 The low pressure system has shown the fleet what the mighty North Pacific is capable of, with the wind veering almost 180 degrees to the north and quickly picking up after a day of gentle conditions.

After quickly changing from spinnakers to white sails and putting reefs in the mainsail, the fleet endured sustained headwinds of 30 to 50 knots, and a sea sate which built rapidly. The favourable current helped the yachts keep making progress some 3800 nautical miles away from Seattle.

The most northerly yacht, ClipperTelemed+, is now top of the leaderboard for the first time this race, with former leader Unicef now in second and LMAX Exchange in third.

“During the night this filled in somewhat and we were making great progress with our lightweight spinnaker. We were anticipating a wind shift and upon first noticing the wind start to come around, we gybed, before the wind really turned into the north.

“Just as we had got our downwind sails down the breeze really hit and before we knew it we were sailing into 30-50 knot headwinds, and a rapidly building sea state to match. Thankfully we had ourselves prepared just in time.

“Now we are torn between the more favourable easterly tack, or the less favourable but looks better in the long run northerly tack. We have lost sight of our little group that we were in for the time being so we are eagerly awaiting the next schedule in order to better gain an understanding of their positioning,” Matt added.

Huw Fernie, Skipper of Visit Seattle, in tenth place, described the last 24 hours on board: “Well if yesterday was too light to make good progress then today was too windy. All was going well as the group of us this morning were racing away and making some good miles. Then the wind got up, and up, and up.

“On Visit Seattle we had the advantage of being slightly to leeward of the other yachts, and that meant we could see the wind hit the others first, so our sails came down a bit earlier and we avoided any damage. Then we went through our sails ending up on reef 3 in the mainsail and just our storm staysail up forward.

“All in all it was quite good fun and now we have the first signs of the winds easing. I think we were a touch over cautious but we have made up miles on the other boats and after our last significant storm (just off Shanghai) it has been a good exercise to go through this one and to do it well,” Huw added.

At approximately 0000 UTC today, Garmin and Derry~Londonderry~Doire rendez-voused to transfer fleet spares in order for Garmin to repair its watermaker.

Both teams then returned to their respective positions where they engaged their engines and resumed racing. All crew are safe and well on board each yacht.