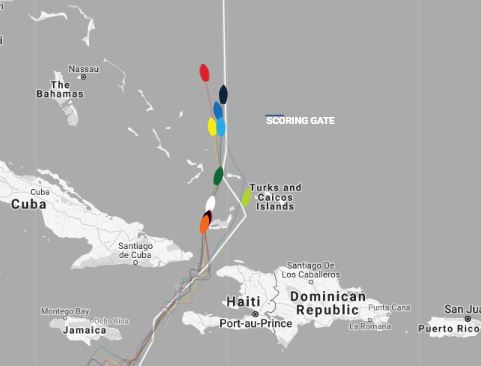 The Clipper Race fleet leading pack has left the Caribbean behind and arrived in the Atlantic Ocean proper, but with many teams remaining in Stealth Mode, a mystery over whether anyone will go for the bonus points on offer in the Scoring Gate is developing on Day 6 of Race 11: Nasdaq Race from Panama to New York.

Whilst the teams at the front opted against going for the Scoring Gate, the good decision making continues for both PSP Logistics and GREAT Britain. The two teams picked a westerly route through the Caribbean Islands, resulting in PSP Logistics emerging from Stealth Mode in first place with a 35 nautical mile (nm) lead on the second placed GREAT Britain.

However, with Sanya Serenity Coast currently in Stealth Mode and hidden from public view for 24 hours, there is no room for complacency, as GREAT Britain skipper Dave Hartshorn explains: “We have overtaken Unicef which was 8nm in front of us when we went into Stealth Mode.

“But as they are now in Stealth, we cannot see Sanya Serenity Coast which was close to Unicef last time we saw it. So, there is the possibility we have gone from fourth to second, but we'll have to wait 24 hours now to see if we are in front of Sanya Serenity Coast.”

Sanya Serenity Coast skipper Wendy Tuck is giving little away whilst in Stealth Mode and of the Scoring Gate, said: “Today we had a debate re the scoring gate. Can’t tell you what the outcome was.”

Qingdao was much more upfront when it came to discussing the first chance for bonus points in Race 11: Nasdaq Race, with skipper Chris Kobusch commenting: “Against Qingdao tradition, we decided to skip the Scoring Gate because one, it was upwind of us and we would have to beat to get to it, and second, it would have added a hundred miles to our trip, which would have cost us probably more than we would be able to gain again.

“So unfortunately, no bonus points from the Scoring Gate this time. Next opportunity to score some extra points is the Elliot Brown Ocean Sprint about 400nm ahead.”

So far, no teams have gone for the Scoring Gate bonus points on the Clipper Race Viewer, though like Sanya Serenity Coast, Garmin and HotelPlanner.com are also in Stealth Mode.

And whilst we will have to wait to learn which route the teams have opted for, all is well aboard HotelPlanner.com, as skipper Conall Morrison reports: “Since we escaped the patchy winds between Cuba and Haiti/Dominican Republic and passed through the Windward Passage, sailing has been fast and all miles under the keel have been in the right direction towards New York. This makes a refreshing change from the past week of upwind sailing.”

The 1,900nm race to New York is expected to take approximately 12 days, arriving at Liberty Landing Marina between 14-16 June. To follow the progress of the teams, keep an eye on the Clipper Race Viewer. You can also read the skipper Blogs in full in the team pages or learn more about life on board in the Crew Diaries.