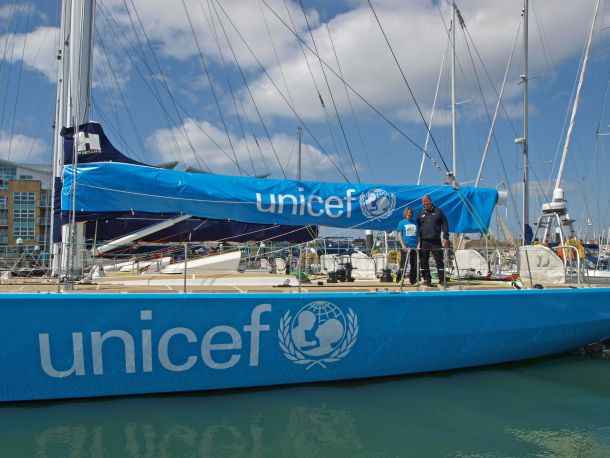 18 June 2015 – The Clipper Round the World Yacht Race today announced that Unicef, the world’s leading children’s organisation, will have a yacht entry in the tenth edition of the world’s longest ocean race. The cost of the team entry has been donated by the race organisers to Unicef UK, the Official Clipper 2015-16 Race Charity.

Clipper Race CEO William Ward explained: “The Clipper 2015-16 Race is our tenth edition and we wanted to mark this landmark in the history of our biennial international event by giving something back to the global community. I am very proud that the Clipper Race is able to support a Unicefyacht entry and hope that as the team races around the world they will help raise awareness and support for Unicef’s work to protect children in danger.”

Unicef operates in 190 countries around the world, including every country on the Clipper Race route, and ensures more of the world’s children are fed, vaccinated, educated and protected than any other organisation.

Becks Bohling, Head of Public Fundraising at Unicef UK, said “We are thrilled that the Clipper Race is supporting a Unicef a yacht in the 2015-16 race. Clipper Race crew members are taking on one of the greatest challenges on earth and we hope that people support their incredible efforts and their fundraising activities throughout the race. With the help of crew members and sponsors, Unicef can make sure that more children grow up happy, healthy and strong.”

Jim Prendergast, 40, from Gosport has been named as the skipper who will lead the Unicef team. He commented: “My crew and I are extremely honoured to be racing around the world on the Unicef yacht. We hope that people everywhere will get behind us and help the Unicef team and the whole Clipper Race fleet to make a positive difference to children in danger all over the world.”

Uniquely for amateur sailors, more than 670 crew members from all walks of life and representing over 40 different nationalities will compete in the Clipper 2015-16 Race. As the fleet makes its way around the world, crew members and Clipper Race supporters will be encouraged to fundraise for Unicef’s work for children.

Setting sail from London on 30 August 2015, the Clipper Race fleet’s twelve identically matched ocean racing yachts will compete against each other competing between six different continents before returning to London in summer 2016 to a victorious homecoming.

The Clipper Round the World Yacht Race is 40,000 miles long and takes almost a year to complete. In addition to being the longest ocean race in the world, it is also known as one of the planet’s toughest endurance challenges.

For more information on the Clipper Race and Unicef partnership please visit www.clipperroundtheworld.com/unicef.