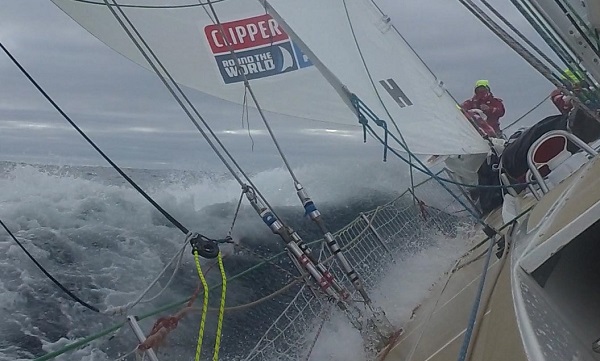 Christmas has come early for the Clipper Race fleet which is finally enjoying the downwind sailing conditions that teams have been hoping for as they gear up for the Elliot Brown Ocean Sprint.

There has been no change to the top of the leaderboard with Sanya Serenity Coast remaining in first place, holding a 75 nautical mile advantage over second placed PSP Logistics.

However, skipper Wendy Tuck is all too aware of the competition on its heels and is far from complacent. Speaking from on board she said: “The next sched will show if we have held our own or if the pack is still catching us, particularly PSP Logistics (in second place). We do have the little matter of the Elliot Brown Ocean Sprint very soon.

“Now we have the breeze that the boats behind us have had for quite a while, we are sailing straight towards Freo but as I have said before, skippers are never totally happy and the wind is just a tad too strong now for a kite.”

Visit Seattle has moved up the leaderboard into third position and is closely followed by Qingdao, which is playing its Joker, in fourth place. Skipper of Qingdao, Chris Kobusch, said: “We are flying! The westerly winds filled in and we had a great run under spinnaker all day yesterday.”

There has also been changes in the middle of the fleet with Dare To Lead now in fifth place ahead of GREAT Britain in sixth and Liverpool 2018 in seventh. Lance Shepherd, skipper of Liverpool 2018, commented: “With less than 2,000 nautical miles to go, and with good winds for most of this course, it is starting to feel like we are on the home stretch.

“We are also getting set to charge across the Elliot Brown Ocean Sprint in less than 400 nautical miles.”

It is a similar story on board Unicef which sits in eighth place ahead of Garmin in ninth and Nasdaq in tenth. Unicef skipper Bob Beggs remarked on the long-awaited downwind conditions: “It’s a great day surfing down south. Helmsmen are improving their personal bests with boat speeds now in the high teens and early twenties with huge smiles to match.”

HotelPlanner.com holds 11th place but is working hard to claw back some miles on the fleet and should soon be enjoying the same downwind conditions.

With such tight racing on the approach to Fremantle, it is looking like it will be a close tactical finish to Race 3: The Dell Latitude Rugged Race.