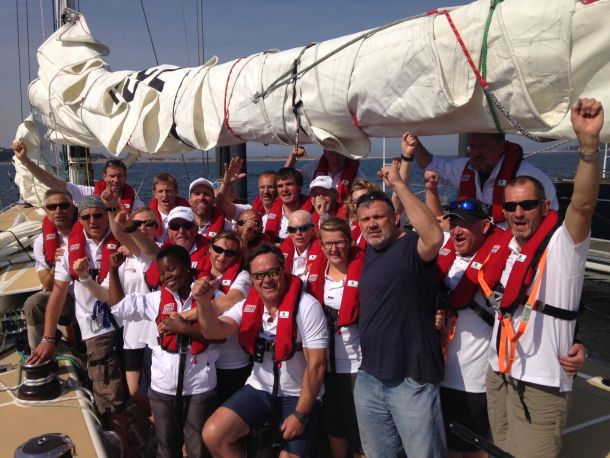 The crew of IchorCoal signals their return to racing. Photo Clipper Ventures.

Close competitive racing in the first leg of the Clipper Round the World Yacht Race from London to Rio has been overshadowed this week by the death of a crew member in what appears to be a tragic accident.

Having safely navigated the Bay of Biscay, increasing wind speeds propelled the fleet along the Portuguese coast. But as the team aboard IchorCoal put in a reef to reduce sail area one of the crew was knocked unconscious and failed to recover despite immediate medical assistance and expert remote guidance.

Andy Ashman, a paramedic from South East London was an experienced sailor and described as being typical of the ‘Corinthian’ Clipper Race spirit. He was an inspiration to the rest of his team of amateur sailors from all walks of life.

This was the first fatality in the 19-year history of the race which has trained over 3300 people to participate safely in nine previous editions of the biennial global event.

The news of the incident was received soberly across the fleet and tributes were paid by many who had trained alongside Andrew.

Messages of support from his family and friends encouraged the team to continue as it is ‘what Andy would have wanted’.

While the team aboard IchorCoal went ashore at Porto, in northern Portugal, the Clipper Race fleet paid their respects, flew their Red Ensigns at half mast, and raced on as the most fitting tribute.

At the front of the fleet the duel continued between GREAT Britain and LMAX Exchange. But the two have now split with LMAX Exchange taking a clear lead of more than 160 nautical miles closer to the finish in Rio after taking better winds further east, racing through the Canary Islands and then close to the West Saharan coast.

The leaderboard has seen some considerable changes over the last 24 hours, as the teams made their tactical decisions on whether to pass between the Canary Islands and take more of an inshore route, or leave them to port.

Get it wrong and you are caught in the wind shadow of the huge volcanic mountains that extend for more than 100 miles out to sea, creating a major headache as the Skippers seek out the more steady Trade Winds.

The Northern Irish entry Derry~Londonderry~Doire is neck-and-neck with GREAT Britain further west, but they could be overtaken by Qingdao and Garmin hoping to copy the LMAX Exchange manoeuvre through the Canaries.

Derry~Londonderry~Doire led the race for a time on Tuesday. Skipper Daniel Smith explained: “The day was spent gybing down a narrow band of wind trying to keep the boat moving and achieve the best speeds downwind. By 1800UTC we got the result we were looking for. For the first time since leaving the Thames we were back in first place.

“This was a great achievement from the crew despite them knowing it probably wouldn't last for long. LMAX Exchange has put itself further east, and was approaching a band of stronger steadier winds. Our plan of squeezing through west of Madeira hadn't worked out as well as we'd hoped due to the wind strength decreasing.

“We are continuing to fight our way south into what should be an ever-increasing wind, keeping an eye on the positions of more easterly yachts and hoping that they don't all manage to slot in in front of us.”

In Porto the team of IchorCoal was met by Clipper Race officials led by founder Sir Robin Knox-Johnston.

After time to reflect they came to the unanimous joint decision to continue racing and return to sea as soon as possible.

Andrew’s brother Keith Ashman flew out to reinforce the family’s support for the team’s decision and waved them off as they headed out to resume racing.

On the broad transom at the stern of their 70-foot ocean racing yacht the team wrote “For Andy. Roger that!” One of Andy’s favourite responses.

The team has been awarded redress for the incident to compensate the time lost. The Race Committee has decided to award a time redress of 81 hours and 1 minute to IchorCoal.  This is calculated on the time from the accident until the yacht commenced racing of 85 hours and 52 minutes, less the time the yacht gained by re-starting 41.2 miles further along the race course, which, at their average speed at the time of the accident of 8.7 knots, is 4 hours and 51 minutes.

This 81 hours and 1 minute will be deducted from IchorCoal’s finishing time in Rio de Janeiro to give the team’s overall position on Race 1.

As a lasting tribute the Atlantic Ocean Sprint, a short section of the race track off the Brazilian coast where extra points are awarded for the fastest team between two points, will be named in Andy’s honour. The fastest team will receive a special trophy, the ‘Andy Ashman Memorial Plate’ in Rio and it will continue to be awarded in future editions of the Clipper Race.