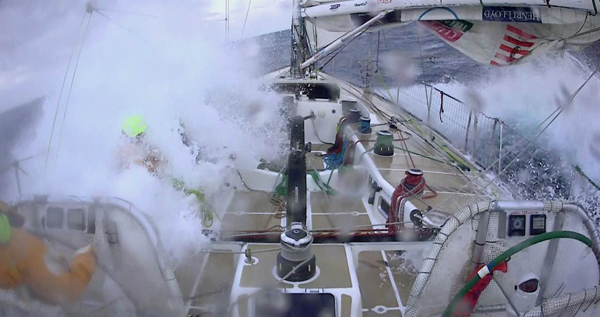 For most competitors in the Clipper Race fleet, it's the relative calm before the storm, with teams bracing themselves for a period of text-book North Pacific Ocean weather on day 15 of the 5,600 nautical mile race to Seattle.

In what should result in excellent racing conditions, the current south-westerly gusts of 30 to 40 knots are predicted to hit 60 to 70 knots over the next 6 to 12 hours.

PSP Logistics, which has fallen out of the lead to third for the first time in four days, remains one of the most southerly teams and skipper Matt Mitchell says: “Later on in the forecast there could be some strong southerlies too which I am keeping an eye on. I want to make sure that we have plenty of room on the race course to the north so that we can sail downwind when they arrive as going beam on to that sort of stuff out here is a recipe for disaster.”

The crew on the fourth placed Dare To Lead are likewise busy making preparations for the approaching front and the conditions it will bring with it.

Skipper Dale Smyth explains: “We continued to make good progress overnight but ended up stuck in a small ridge of high pressure for most of today whilst we transition two low pressures. The next system looks to be another fast, rough ride so we are busy preparing on deck with smaller sails.”

Fresh from its Scoring Gate triumph, Sanya Serenity Coast moved from fourth to first on the leaderboard overnight and skipper Wendy Tuck is watching with interest to see who has positioned themselves best to utilise the coming low, the boats to the north or to the south.

Tuck says: “We have sailed through a little light breeze area that we were expecting. The tactics have been varied over the fleet with a couple of boats heading south to try and avoid it, so will be interesting to see how it all pans out.”

Unicef's decision to tack and stay south is certainly paying off, with the team jumping from eighth to second. In the last 12 hours, the Unicef crew crossed off another 106 nautical miles off the distance to Seattle, more than double the distance covered by some of the more northerly teams. However, it hasn't all been smooth sailing.

Skipper Bob Beggs says the team was kept on its toes throughout the night: “We had a busy night of hoist and drops of kites and ended up with only one halyard available forward at the top of the mast. This resulted in two trips to the top in the dark in testing conditions to resolve the issue, so we now have a full complement of halyards and are powering along with our Code 3 in company.”

Like Garmin, which has dropped from second to sixth, the fifth placed Qingdao is experiencing an unwelcome calm spell as skipper Chris Kobusch reports: “After a few days of fast downwind sailing, we are stuck once again in light and patchy winds.

“We saw it coming and, in an attempt to sail around it, headed south for a while. PSP Logistics and Garmin had the same idea, but we got stuck nevertheless. So currently we are sailing at 4 knots in thick fog and a rolling swell, with the main banging from side to side. Lovely.”

HotelPlanner.com, currently in seventh, remains the most northerly of all eleven boats and is experiencing similar conditions to Qingdao as the team waits for the approaching low.

Skipper Conall Morrison comments: “The low-pressure to the north has moved east and the sea has become more regular. We sailed all night with the Yankee 1 and changed to Code 3 at first light. The area between the low-pressure passed and the one due soon has left a ridge of high and not much wind.

“Unfortunately, we are upwind in light winds now and the current weather forecast suggests boats further south may do better.”

The cold is continuing to test both skippers and crew alike, with Dare To Lead and Garmin both reporting snow on deck.

Keep track of the fleet to see how the weather systems affect the fleet via the Clipper Race Viewer and hear more from the skippers and crew on the Team Pages.

Despite the excellent current progress, the light conditions and wind holes that hit the Clipper Race fleet in the days after leaving Qingdao has resulted in the arrival window for Seattle being altered.

The fleet was originally expected to finish Race 9: The Race to the Emerald City and arrive into Bell Harbor Marina between Saturday 14 and Thursday 19 of April, but conditions in the early part of the race means the boats are now expected between Thursday 19 and Saturday 21 April.