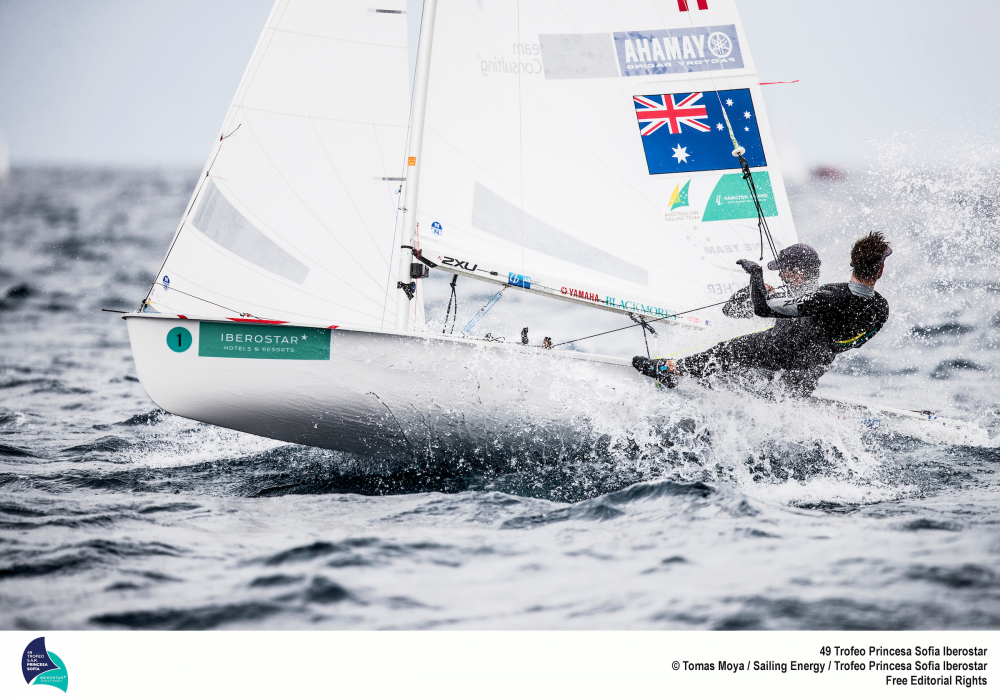 Overall victories in five of the ten Olympic classes at the 49th Trofeo Princesa Sofia Iberostar have been decided before Saturday's double points Medal Race is sailed.

The strength and depth of competition at the biggest ever edition of Mallorca's showcase regatta and the variety of testing, different breezes have conspired to deliver a high scoring regatta in most classes.

The Men's 470, 49er FX, Finn, Laser Radial and the Nacra 17 were all settled during the last day of Finals racing. The offshore and cross-offshore breeze may have reached 17 or 18kts at times but it was peppered by big shifts and changes in pressure which made it all too easy to make a 20-plus point bogey race score which terminated title hopes in several classes.

Great Scott
The Men's 470 and Finn followed the expected form book. Britain's Olympic champion, Giles Scott, maybe matched his Sailing World Cup Miami performance in the sense he, again, won with a day to spare, but the Bay of Palma this week offered a 73 boat fleet to the end, nearly three times the size of the World Cup fleet.

As if to prove just how difficult it was to read the shifty breeze Scott was caught out in the penultimate series race, his worst score of the week. His target consistency is to stay within a 5pts average per race and Scott accomplished that.

Scott explained, “I think I just concentrated on putting myself in positions where I could manage it with a bit less risk. It is tricky to know here when to take some leverage and try to make the big gain or when to try to be conservative. Either can land you in the crap.

“I have been able to play that game quite well this week. That is probably why I have not really had any real properly shiners of races but have been nicely consistent around that 5 mark which in these fleets of 70 odd boats is good. But this is such a different game to where ISAF is heading with 20-25 boat fleets.”

Experience is the key
Australians Mat Belcher and Will Ryan had a long day on the water, their second 470 Men's race seeming to take an age to be set off because the winds refused to cooperate and finally it was abandoned. But their tally of 29 points leaves them 35pts clear ahead of Turkey's second placed Deniz and Atez Cinar.

Belcher has been coming to the Trofeo Princesa Sofia for 16 years and it is the first major event he ever won in the class, triumphing here with Malcolm Page in 2003.

This is his fifth 470 class win at the Princesa Sofia after 2003, 2012, 2013 and 2016. Key to their win, Belcher says, is being fresh and relaxed after their break from sailing. Although he has been coming to Mallorca for more than 15 years he reveals that for the first time he will now take two or three days to explore and relax in the north of the island before heading to Hyeres.

“It is a nice feeling to have it won already,” Belcher said, “We just wanted to see where we are at and so we felt we raced pretty consistently this week.

“We had good speed but the break has helped and we are really relaxed here. We had no expectation and no pressure. We just tried to enjoy the racing. We have so much experience in these boats and I have been here so much you know the conditions. That all helps a lot.”

If Belcher and Ryan's winning margin is comprehensive in the 470 their younger Australian compatriot Matthew Wearn fell just one point short. With a 19-point lead in the Laser, he should have a relatively straightforward task to close out his first Sofia overall win.

Italians Atone
A bitter disappointment in the final race of the 2017 World Championship, when they erroneously hit Spain's Iker Martinez and Olga Maslivets at the first windward mark approach, robbed the young Italian Nacra 17 crew Ruggero Tita and Caterina Banti of their chance to win the world title.

This error has preyed on their minds and has been just one spur to work even harder at their Cagliari, Sardinia training base over the winter. So too the arrival in the Sardinian capital of the Luna Rossa America's Cup program. The Italians have built an unassailable margin in the Nacra 17, often showing a downwind speed edge in the breeze.

“The accident was a motivation because we were so close to winning and it could have been avoided,” Tita commented.

“We are so happy to win the first event of the season. We have been in Cagliari for the whole winter with good partners and that was really important for our program. Here we were really quick, mostly downwind. We have always been fast downwind in the strong winds but for the light winds days we were in trouble, so we did well today.”

Double Dutch?
The FX win for the Netherlands Annemiek Bekkering and Annette Duetz was also conclusive. But with their Dutch counterparts Odile Van Aanhot and Marieke Jongens lying second there is evidence their squad rotation is working.

After rotating each different viable combination of the nine FX squad sailors the two – who sailed together seventh in Rio – are back together again. This week they have been helped by Aaron McIntosh who coached their double Olympic RS:X gold medallist Dorian Van Rijsselberge.

“He has been a great help. He emphasizes to keep it simple and don't overcomplicate things. If you know it go for it,” Bekkering highlighted, “We have improved a lot since we won here in 2016, for sure.”

Of the squad rotation policy Duetz adds, “It is very positive and you can see the level of the whole Dutch team has stepped up. We share our experience, everyone has different strengths but we are all pushing each other all the time in training. That is powerful. Even training is racing each other.

“We are friends on shore but as soon as we are all on the water we want to beat each other. But we all get all as friends. The nine of us are all different and that keeps it interesting. Now we are open to being different and doing our own things. “