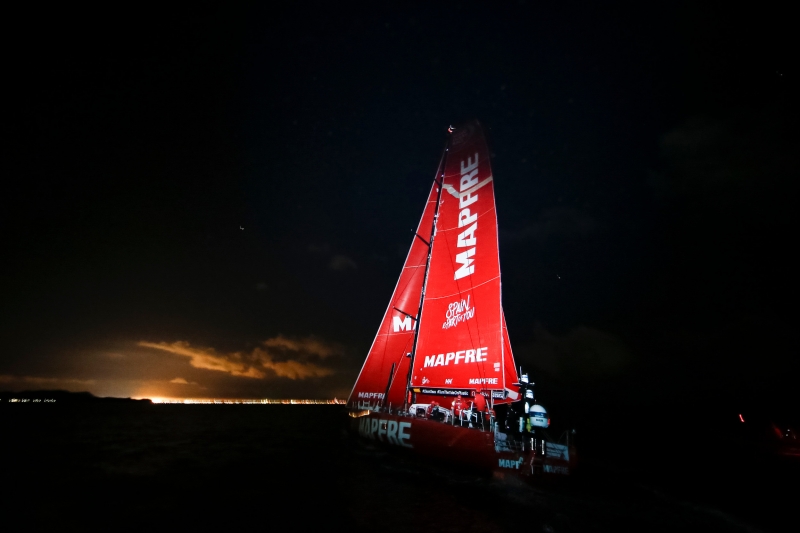 The Spanish team MAPFRE crossed the finish line for Leg 7 of the Volvo Ocean Race in Itajaí, Brazil on Sunday morning, securing a fifth place finish and collecting six points.

The result hands the overall lead in the race to Dongfeng Race Team, who leapfrog over MAPFRE with a one-point advantage on the leaderboard.

It’s a disappointing turn of events for skipper Xabi Fernández and his team who had led the race since winning Leg 2.

“It’s been difficult for all of us,” Fernández said. “We were expecting much better, but it’s not the end of the world, it’s not so bad.

“We were compromised this leg with technical problems, but it’s nothing to do with the crew work or the trust we have in each other. We’ve been going very well up to this moment and I’m pretty sure we’ll keep going well in the future.”

While MAPFRE was able to hang on to the leaders through the gales and hard miles of the Southern Ocean despite a damaged mast track, a torn mainsail at Cape Horn subsequently forced a 13-hour stop for repairs.

That allowed the leading group to push ahead of a high-pressure ridge, which would eventually all but block MAPFRE’s progress north towards the finish and turn that 13-hour pit-stop into nearly a five day deficit at the finish line.

Both teams are now delivering their boats to Itajaí, Brazil, with a view to being on the start line for Leg 8 on Sunday, 22 April.