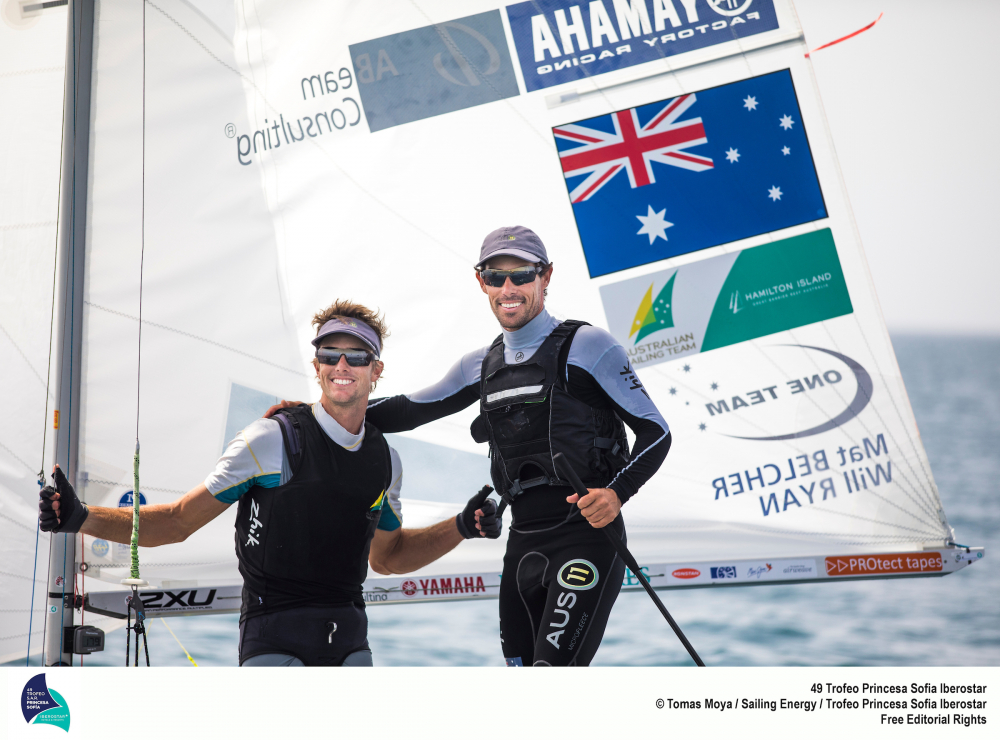 Australia's world champions Mat Belcher and Will Ryan, outstanding winners of a strong, competitive 470 class, were awarded the Princesa Sofia Trophy, the top overall award at the biggest ever edition, as the 49th Trofeo Princesa Sofia Iberostar.

Concluded in light, hesitant breezes in Mallorca today, the regatta attracted 870 boats from 62 different and more than 1200 sailors.

Belcher and Ryan, the 2016 Olympic silver medallists (Belcher was the Olympic gold medallist in 2012) won the tricky Medal Race today to cap an impressively consistent performance, counting all their results inside the top 10 in a high scoring regatta, to win by 39 points ahead of Turkey's Deniz and Ates Cidar.

For eight-time world champion Belcher, winning the top overall award at a personal favourite regatta, one he has been coming to since the age of 19 in 2001, is a particular pleasure. This is his fourth win here.

Mixed up Breeze
The clash between the offshore gradient and the thermal sea breeze made for difficult Medal racing conditions with big gains and losses made during the class showdowns.

The luxury of already having secured their Sofia titles before the Medal Races meant Giles Scott in the Finn, Belcher and Ryan in the 470, Dutch duo Annemiek Bekkering and Annette Duetz in the FX, Italian Nacra 17 pair Ruggero Tita and Caterina Banti and Laser Radial winner Anne Marie Rindom could afford a relatively relaxed approach to their final day.

Rindom cruised to sixth in the Radial medal race to win by 15pts ahead of Britain's 2016 world champion. The Danish world champion of 2015 clinched the Sofia title after nine attempts, twice finishing third.

“It is not so much about winning here,” Rindom reported, “just now it is about good training and making sure I have good technique. I was working a lot on speed through the winter. If you have speed everything else is easy. Light upwind I have been trying different things and it is coming together.”

Comeback from a Cruel Cut
The so called 'leather medal', fourth, is the cruellest finish. But Holland's RS:X racer, Lilian De Geus, missed Bronze in Rio by a single, solitary point. Haunted for the ensuing year by 'what might have been' she considers she has put the experience to bed and is looking forward, training harder and smarter than ever.

De Geus proved the value of her year away from the board and her recent training by winning the RS:X class on the Bay of Palma for the first time.

De Gues recalled, “I am going for a medal this time for sure. Every day I look back at that one point, what I could have done better. At first it was really hard and I thought about it every, more times a day, now it is less.

“The year after the Olympics I was looking for any distractions, anything to take my mind of it, but I am a bit older and more mature and that helps.

“At the Games there was one day when they decided to race inside. We had trained a lot but we had never trained in the conditions we got that day inside. One day we had totally different conditions and I had two results not even in the 20s that was my Olympics. Or the one person I should have passed on a downwind. These are the things that haunt you.

“My motivation is so high and I have learned to train more effectively, better, more productive hours on the water. I trained a lot here. We had a bike camp in the summer and Dutch squad sailors. My boyfriend lives here in the town.”

“We’ve had a really solid block of training with our squad back home in the Australian summer and we’ve been working really hard together,” Wearn said.

“We’ve had a few events at home and then we went to Miami, so we’ve had a really good amount of sailing under our belts.” Wearn, who is Burton's long time training partner explained.

“Tom and I have a good professional relationship, but we are two guys battling out to be first and second in the world. There are heated moments, but we both know we need each other as much we do. To get the edge on the fleet come 2020, we need to work hard together.

“We have a strong thing going in Australia. We are always, always pushing. It is that competitive mind set. We all always want to beat each other.”

While Belcher and Ryan topped the Men's 470 fleer Japan proved once again to be in good shape for the approaching home Olympics taking Bronze in the Men's fleet and winning the Women's 470 in the shape of Ai Kondo Yoshida and Miho Yoshioka. Britain's Hannah Mills, gold medallist now sailing with Eilidh McIntyre, took second.

Argentina's Lange brothers, Yago and Klaus, overshadowed world champions Dylan Fletcher-Scott and Stu Bithell to win the 49ers. The British pair was over the start line in the Medal Race and had to recover through the fleet to finish three points adrift.

Poland's Pawel Tarnowski made a successful defence of the Palma title he won here last year, but he only secured it on the last leg of the Medal Race, passing three rivals in the dying seconds. He dedicated his second successive Sofia win to his own Zofia, his sister whose birthday it is today.

Great Britain's sailing team collected the biggest haul of medals with five; Gold for Scott in the Finn and Silver for the 470 Women, 49er, Laser Radial and Nacra 17.