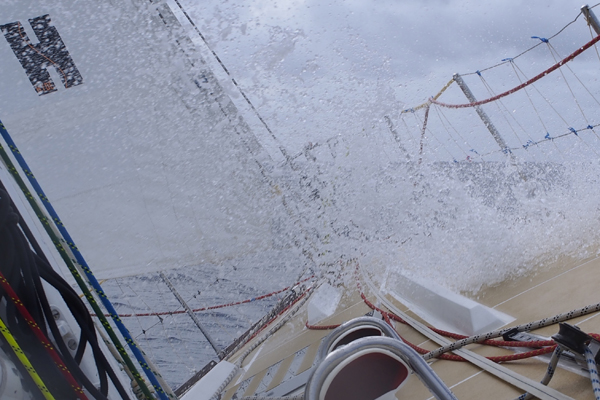 A swift turn around Amianan Island has seen half of the Clipper Race fleet gybe to the south-west as the teams head for the Ocean Sprint course and next waypoint off the south coast of Vietnam.

Spinnakers are down and the teams are racing under white sails with Derry~Londonderry~Doire still holding more than a 35 nautical mile lead over GREAT Britain. However the boats further back have been making ground on the second placed team, with Qingdao and Garmin now within 25nM.

Still on the approach to the waypoint, and currently in ninth place, Unicef Skipper Paul Atwood says they are starting to experience the wet and wild conditions of the low front sweeping over the fleet from the east.

“The squally, rainy weather is back together with a lumpy sea state. This, together with low level clouds, made for a dark, bouncy and splashy night sail. Plus the wind has backed a little so away went our medium weight spinnaker and out came the white sails again. As of 1200 UTC today, we shall have been on this tack for eight days without prospect of another before we reach our turning mark at Amianan Island.

“This morning Starboard Watch were putting in a reef when a pod of what they think were pilot whales arrived to play – great to see something else out here. Plenty of flying fish, the odd booby and four cargo ships are about it for the last eight days.”

Whilst racing remains the focus of all the Skippers and crew, they are finding challenges in the Da Nang New Discovery of Asia Race which they had yet to experience in their circumnavigation thus far, as Da Nang – Viet Nam Skipper Wendy Tuck explains: “Last night was an interesting one, the wind had changed so we were sailing under a Yankee and staysail.

“The call was for some unidentified lights coming into view. They were fishing boats. Most of them didn’t have AIS (Automatic Identification Systems) so we just had to go back to old school and use eye ball MK1, we always use this with everything else,” continued Wendy, whose team currently lies in eighth place.

“It was no problem really, we just had to keep a higher course than we wanted to. Sometime later another popped up. He was hi-tech and did have AIS, also what I had never seen before is that he had AIS on his nets, and it did say they were fishing nets, making life a tad easier. I tried calling the fisho but no answer. I had to assume that the marks the beacons were on were all attached so going in between them was not an option.”

Within the next 24 hours the front half of the fleet is expected to start the Ocean Sprint with each team vying for the two extra points on offer as they aim to cover the course in the fastest time. Follow their progress on the Race Viewer.Click here to see the schedule of events planned for the Da Nang stopover.

If you can see yourself sailing across the Luzon Strait in the Clipper 2017-18 Race then contact the Crew Recruitment team to find out more.