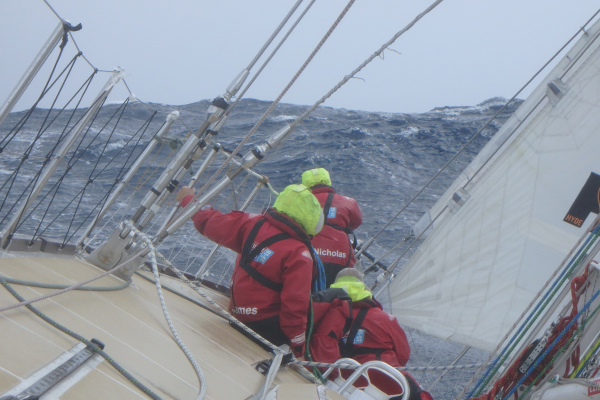 AThe wind has eased and veered round to the east, pushing the yachts onto a more northerly heading as the leading teams start the Ocean Sprint section of the course.

The Kuro Shio current is also helping push the eastern part of the fleet along in a much calmer sea state than experienced over the last few days.

The current is sometimes known as the Black Stream and flows northeastwards past Japan, transporting warm, tropical water northward towards the polar region.

At the mid-way point of The Sailing City • Qingdao Cup to China, Garmin is still leading the fleet, LMAX Exchange has moved up to second and GREAT Britain has climbed into third position now.

Garmin, LMAX Exchange and GREAT Britain have now started the Ocean Sprint section of the course, but the weather is looking complicated with the wind forecasted to continue easing.

Olivier Cardin, Skipper of LMAX Exchange, describes the last 24 hours on board while preparing for the sprint against his team’s old rivals.

“We went through the Luzon Strait still upwind in an easing wind. We had some evolutions to do like shaking a reef out and changing our Yankee. The Ocean Sprint will be tricky as the weather forecast is very light along Taiwan.

“Our positioning is quite good. By staying more east than the fleet, we are more offshore with expectation of more wind and more current. Unfortunately we are not alone on this side. Our best friends, GREAT Britain and Derry~Londonderry~Doire wanted the east side as well. With these two boats around, the sprint promises to be intense!”

Wendy Tuck, Skipper of Da Nang – Viet Nam, which has dropped into fifth place from second yesterday, said everyone on board has been waiting for the next position report to come in.

“The last one had us in a good position but it is all to do with what tack you are on. We have now spent some time on the heartbreak tack, the one where you are not sailing towards your next point, but you have to do it.

“The sea state has calmed down but we are still living on the north face, but it’s normal now. The next part of the race looks a tad tricky with lots of light wind areas, it will be interesting to see how everyone tackles them.

“We have a plan but of course it could all change when we get the next weather through,” Wendy added.

Will Garmin continue to hold its lead, and race to its first victory of the series? Who will complete the quickest Ocean Sprint time? Follow the Race Viewer for all the action.