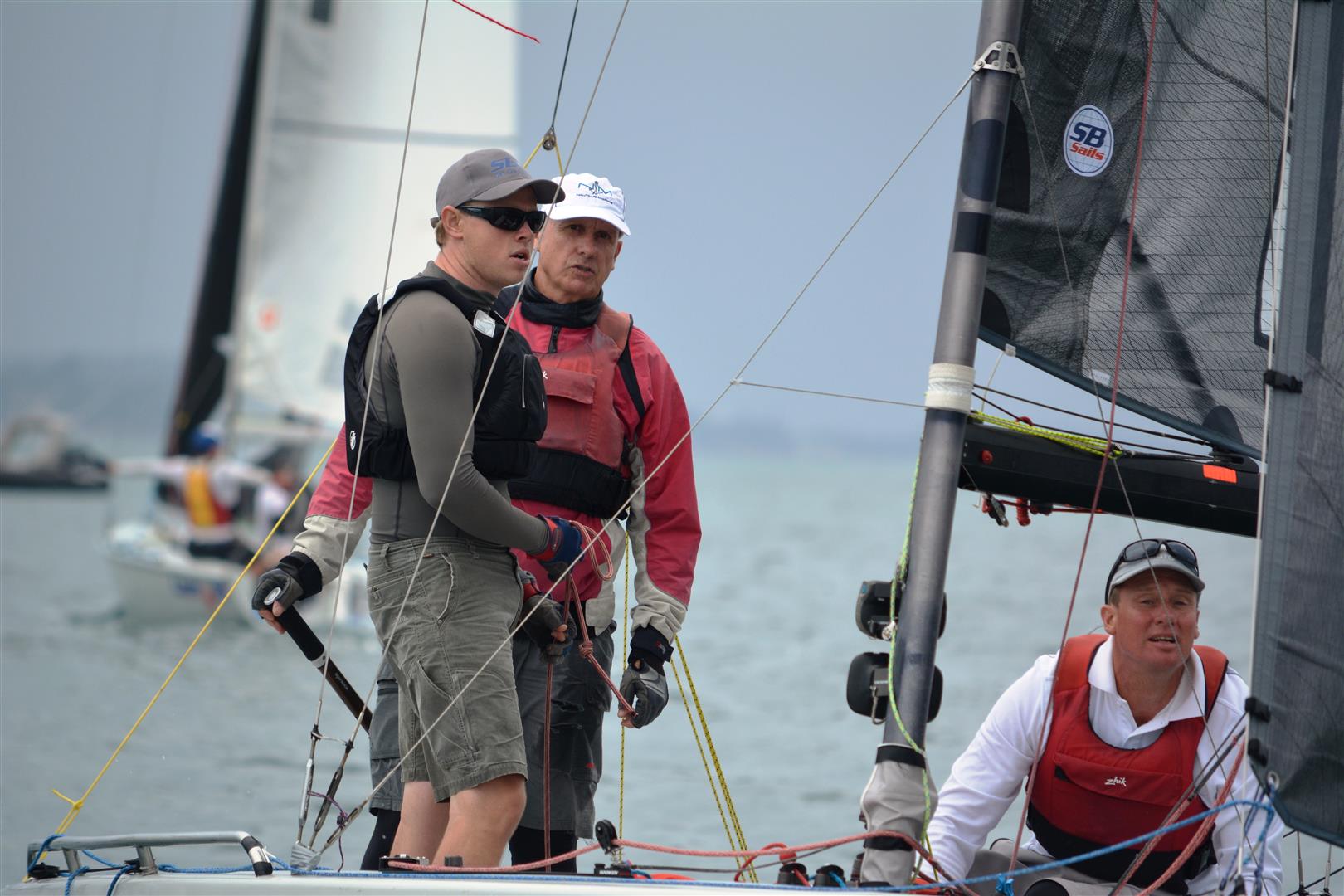 In the spirit of close and competitive one-design sailing, it will all come down to the results of Day Four to decide who will be the 2016 SB20 Australian Champions.

PRO Kevin Wilson took advantage of the breeze today, and after two postponements due to lack of wind, got the fleet away in Race Six of the series (the first of here scheduled races) in light variable conditions of 5-7 knots.

Tasmanian sailor Scott Brain (Ronald Young Builders) started day three in fine form, leading the fleet for the duration of Race Six, consolidating his win on the final downward leg with a smart move, splitting away from the rest of the fleet. Brain and his crew of Michael Viney and Bill Lawrence were crowned 2016 SB20 Tasmanian Champions last month in the state titles which were sailed on the River Derwent as part of the Banjos Shoreline Crown Series Bellerive Regatta. Fellow Tasmanians Michael Cooper (Export Roo) and Nick Rogers (Karabos) finished in second and third place respectively.

The results of Race Seven saw a shift in the leader-board with former Dragon world champion Nick Rogers (Karabos) following a similar race plan to Scott Brain in Race Six, leading the race from start to finish, and moving up to second place in the series on 14 points, one point behind Glenn Bourke (Red) on 13 points. Race Seven was sailed in good pressure with 12-15 knots of a southerly breeze. The eastern side of the course on the run provided Rogers the advantage he needed to maintain his lead. Stephen Catchpool (Hypertronics) finished in third place.

The final race of the day was sailed in similar conditions to Race Seven with a 12-14 knot consistent southerly breeze. In an uneventful race, Glenn Bourke (Red) led from start to finish. Michael Cooper (Export Roo) worked hard to gain a place, splitting off from the bulk of the fleet but Bourke, as with the previous race winners today, led throughout. Scott Brain (Ronald Young Builders) had another great race finishing in second place in an almost dead-heat with Nick Rogers (Karabos) to maintain fourth place in the series with a 1-8-2 on 31 points.

Going into the final day of racing tomorrow, Bourke is leading the series on 14 points, three points ahead of Rogers on 17 points and six points ahead of Cooper on 20 points. Other crews that did well today include Stephen Catchpool (Hypertronics) who maintains his fifth place with a 7-3-10 today on 41 points and Matt Pilkington (Balios) who moved up the leader-board to sixth on 45 points with a 5-2-6.

The results are provisional noting that two protests will be heard tonight with Cooper (Export Roo) and Matt Pilkington (Balios) both protesting the Race Committee over two incidents on course yesterday.

After a tense period of deliberation, Michael Cooper’s (Export Roo) protest against the Race Committee after the SB20 hooked the top mark on the first leg of Race Five (Friday) was upheld.

Cooper was granted redress and second place for Race Five, which puts the crew into equal second place with Nick Rogers (Karabos), both on 17 points, going into the final day of racing on Sunday, behind Glenn Bourke (Red) on 14 points.

Matt Pilkington’s (Balios) protest against the Race Committee after the boat was called OCS at the start of Race Five was dismissed.

Sailing instructions allow for a further drop after 10 races have been sailed.

Results after eight races of the 11 race series are as follows: