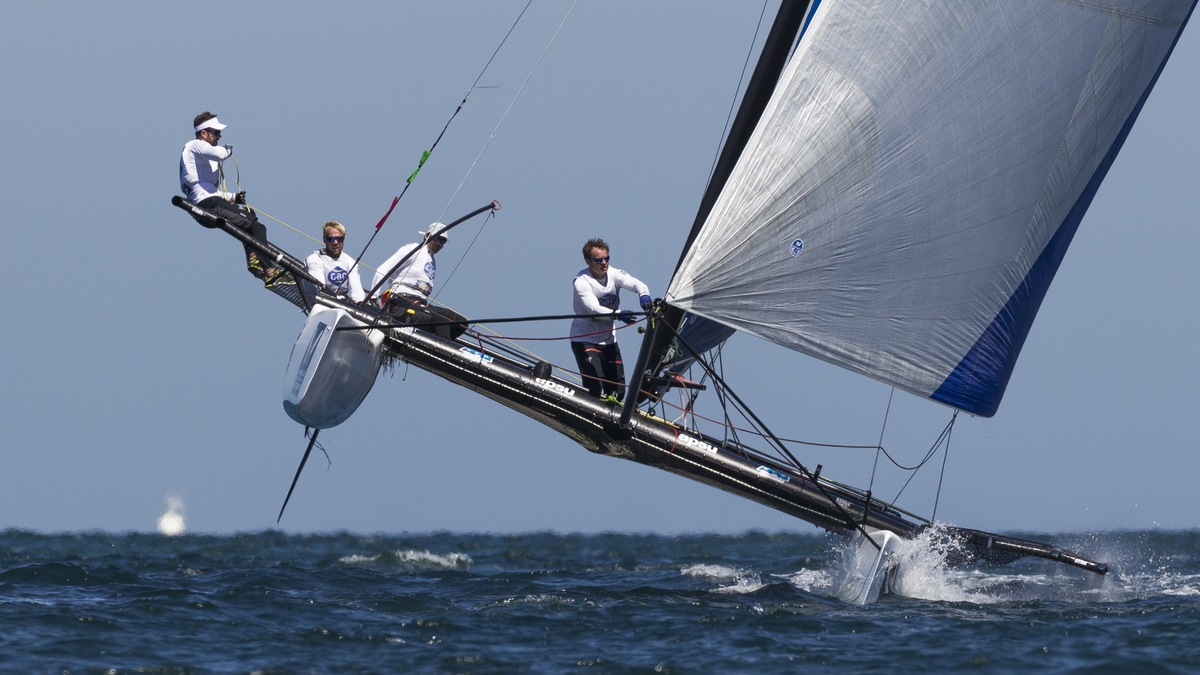 Ian Williams and his crew flying a hull at Fremantle. Photo Ian Romans/WMRT.

The third day of the World Match Racing Tour was a frustrating one for sailors and officials. Light winds in the morning meant a late start before the pro-am could take place and then constant minor breakages on the boats held up the final qualifying session for Group 1.

By the time Ian Williams, Nicolai Sehested, Evan Walker, Steve Thomas and Sally Barkow got on to their boats and out on the course, the Fremantle Doctor was well and truly in, blowing a solid 25 knots with more south in it than usual.

Williams had a perfect record of three from three going into today's scheduled four races and immediately went from rooster to feather duster, finishing last in race four. The honours went to Nicolai Sehested, followed by Australians Evan Walker and Steve Thomas.

Williams was having minor troubles on the boat and finished third in the next two races, with Thomas taking one and Sehested the other. Sally Barcow was suffering problems with her gennaker and brought up the rear in all races.

Finally, just as the last race was about to get underway, there was another breakage on Williams' boat and race officials decided to abandon it and resume toorrow morning.

With the first three going straight to the match racing stage, Williams holds a slender two point lead over Sehested while Thomas and Walker are one point and three points further back respectively. Because of her on-board problems today, Barkow can't qualify and will have to race off for the final four placings in the main draw.

The forecast for tomorrow is for slightly lighter winds and organisers will be hoping for a smooth run. They need to get through the final fleet race, then four qualifying match races (first to two wins) before the main event can commence.