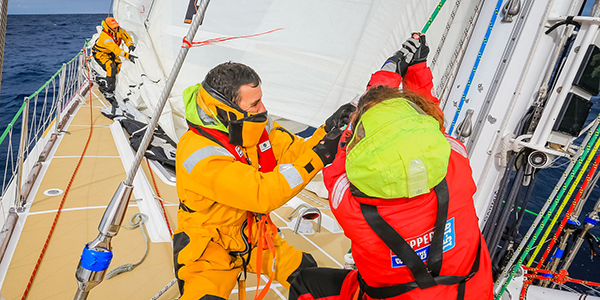 Onboard during the Sydney Hobart leg of the Clipper Race. Photo Clipper Ventures.

However progress over the next 24 hours down the east coast of Tasmania will depend on whether the teams suffer the shadow of the island from continuing westerlies or winds veer back from the north.

Wendy Tuck has continued to keep Da Nang – Viet Nam ahead of the rest of the fleet but it is still very tight and tactics will now be critical.

“Things are looking good at the moment. We are sailing well, the boat is moving fast and everyone is happy. No one happier than me,” Wendy reported.

ClipperTelemed+ has had a good run after escaping the lighter airs. Skipper Matt Mitchell described their good fortune: “The wind started to fill in from the north west in the early hours of the morning. We had a blasting kite run but are now storming along under our largest white sails in a stiff breeze from the west.

He added: “We are really pushing for the finish and the crew and I are all gunning for a much better finishing position than we have had in the last couple of races. Having other boats around helps keep the crew motivated and spirits are high as we push our boat to the limit.”

Currently on top of the overall leaderboard, LMAX Exchange has had mixed fortunes on this race, dropping to below two knots at one stage. “After heavy weather, there was no wind. In the south-east corner of Australia, the wind began to ease,” explained skipper Olivier Cardin.

“We were still beating to Tasmania. Two options were available, offshore or the Bass Strait to avoid the centre of a high pressure system. We chose the Bass Strait.

“Unfortunately, the wind disappeared while it was backing, so it was impossible to tack to escape this. We were stuck for quite a few hours, and the Clipper Race position report showed us in last position for a period of time.”

It subsequently broke free and made ground on the rest of the fleet and were up to third place by 2300 UTC 28 December.

GREAT Britain is holding onto second as we write this having made up ground on Da Nang Viet Nam. Skipper Pete Thornton said: “Well we've managed to get across Bass Strait again, this time she was challenging in a much different manner. The light winds and large current swirls made for a nervous time trying to pick a best route down and let alone trying to follow it! I'm not sure we really found the best current that was available but I can’t complain as we did ok.”

But he ended on a cautionary note: “It's super tight racing and it's not 'plain' sailing to Hobart yet.”

And that is the situation for all of the fleet, especially the front runners.

Comanche, Ragamuffin 100 and Rambler have now taken podium line honours in the 71st Rolex Sydney Hobart Yacht Race. After more than a quarter of the starters have retired the Clipper Race fleet is putting in a credible performance against the remaining 77 competitors.

Da Nang – Viet Nam is showing in 20th place on the official RSHYR Line Honours standings as at 2300 UTC 28 Dec.

Comanche’s Skipper Ken Read summed it up dockside after bringing his wounded supermaxi across the line in Hobart: “This is a hard race. I have sailed around the world two and a half times and I thought I had seen it all but this is one hard body of water.”

He stands in 41st position behind around half of the Clipper 70 fleet in the overall line honours official RSHYR standings, having come close to Garmin at one point in the last day, but is now behind that team.

Clipper Ventures 5, the other Clipper 68 yacht entered, is in 47th position in overall line honours.

The yachts are expected to arrive into Hobart in daylight tomorrow morning subject to the fickle wind conditions in the Derwent River in the final approaches.