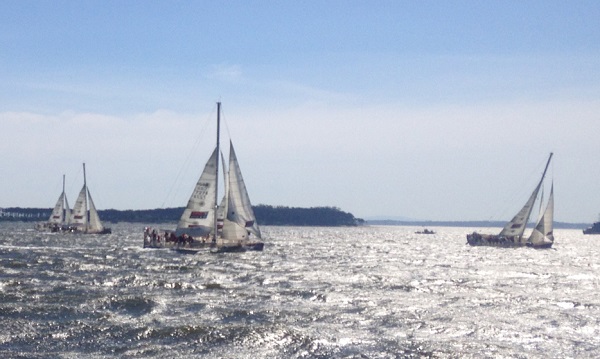 The Clipper Race fleet has enjoyed its first night of sailing in Race 2: The Stormhoek Race to the Cape of Storms, though the teams remain tightly bunched on the leader board after a windy and wild start to the race.

At the time of publishing, Dare To Lead, Liverpool 2018, and Qingdao occupied the top three positions, but with only around 10nM (nautical miles) separating first from eighth, there is still everything to play for in the early stages of this race.

First placed Dare To Lead has opted to play its Joker Card for Race 2, meaning it will double any points earned when crossing the Finish Line in Cape Town. Skipper Dale Smyth, a Capetonian himself, had mixed feelings about his Race Start, reporting: “A really tough first night with a lot of seasickness on board. We had an awful start in 40 knots of wind and we made some bad mistakes, but actually have ended up in good shape, pushing hard through this wild night.”

Liverpool 2018 was first across the Start Line in Punta del Este and has kept pushing to be second on the leader board, just under 2nM off Dare To Lead. Qingdao is under 2nM further back in third, and Skipper Chris Kobusch couldn’t have been prouder of how his crew have progressed since Race Start in Liverpool, saying: “With Thomas Winkler calling tactics and Bernd Weigell helming, we were one of the first boats over the start line, and after the short inshore race course, which challenged the fleet with some strong gusts, we sailed out into the open ocean in fourth position after Visit Seattle, Greenings, and GREAT Britain. Thanks to the whole team for a great effort and flawless tacks and gybes.”

Visit Seattle is hot on Qingdao’s heels in fourth, followed by Greenings in fifth, who welcomed Interim Skipper Andy Woodruff to the team in Punta del Este. Greenings go into Race 2 on the high of winning Leg 1, and Andy comments: “The conditions through the night so far have been fresh, with up to 45 knot gusts. But the team and yacht are handling it all very well as we gobble up miles sailing along around 13 knots.”

Sanya Serenity Coast, Garmin, and GREAT Britain make up the rest of the tight leading pack, while Nasdaq is just over 20nM off the pace in ninth. Skipper Rob Graham reports: “Pleasantly surprised by how much more organised we were on board than when leaving Liverpool or Gosport – everything seemed to go to plan for the start.

“Breezy conditions meant a conservative sail plan for the start and upwind sections of the course, but this was increased as soon as we turned away from the wind.”

HotelPlanner.com, Unicef, and PSP Logistics, in tenth, eleventh, and twelfth respectively, have opted for a different southerly tactic. HotelPlanner.com Skipper Conall Morrison explains: “The first night at sea has turned out to be quite eventful.

“There seems to be a split in the pack already with different strategies being chosen to deal with the current forecast. We are now well reefed down with three reefs in the Main, Staysail, and Yankee 3, with the wind a steady 28 gusting over 35 knots.”

The common thread in all the Skipper Reports from Day 1 of Race 2 was how fondly they will remember their time in Punta del Este, Uruguay. Liverpool 2018 Skipper Lance Shepherd has Fernando ‘Nano’ Antia Bernardez, the first Uruguayan Clipper Race crew member, among his crew and summed it up best, saying: “The sights were gorgeous, the locals were friendly, and the beer was cold – what more could you ask for in a stopover?

“Thank you so much to the Antia family for looking after us over the past two weeks. Nano's family truly did take us in and embraced the whole team until we all felt like long lost cousins who had simply come home for an asado.”

He adds: “It’s quite unusual in that closer to the coast, the front is spreading out, and underneath that spreading cloud you’ll have diverging and very up and down wind.

“It will probably get quite wet too, with the strongest rain along the back edge of the stronger wind. So at least when the wind does drop post-front, it should brighten up considerably.”