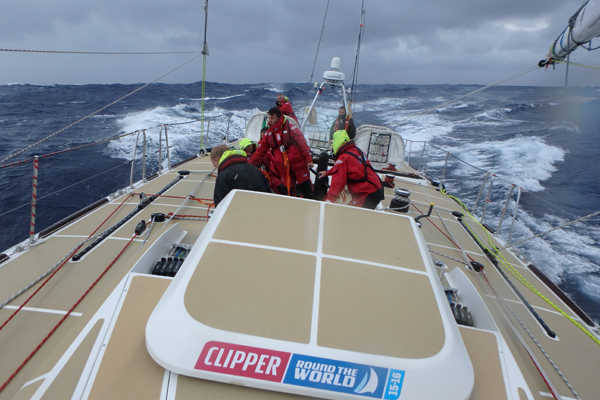 As the fleet enters the final stages of the Da Nang New Discovery of Asia Race, the teams continue towards various waypoints on the route, enjoying comfortable sailing conditions along the way. Visit Seattle and Mission Performance continue their journey south, while the other ten boats are now all northbound.

Having faced a tough beat out of Rio in Race 2, and again out of Albany towards Sydney in Race 4, heading windward towards Da Nang, is proving much easier to manage for the teams, as Qingdao Skipper Bob Beggs explains: “Well, they say gentlemen never go to windward, but if they do, they should do it as we are doing today. The sea is flat with no waves and the wind is from a constant angle and steady. We are heeled over but comfortably so and helming isn't a struggle.

“Our medium weight spinnaker has been refurbished yet again by round the world crew members Sophie Dummer and Jane Harvey, after getting wrapped around the forestay several days ago and is ready for the next hoist on the run to Da Nang.

“The weather forecast is much the same over the next few days as we beat our way up the course. Easy sailing and we best enjoy it because the race to Qingdao is measuring up to be a tough one,” added Bob, whose team currently lie in fourth place.

The front three teams remain the same as yesterday with GREAT Britain and Garmin leading the chase to catch Derry~Londonderry~Doire which has been the front boat for the majority of Race 7.

Despite a dramatic spinnaker wrap a few days ago that caused ClipperTelemed+ to temporarily suspend racing in order to rectify, the team maintains seventh place, ahead of IchorCoal. Skipper Matt Mitchell says: “Another day glides effortlessly by as we make sedate progress upwind in an easing breeze and a flat sea. We are around 230 nautical miles away from Virtual Mark 4, at the rate we are going that will take 48 hours to reach.

“We have managed to hold on to seventh position and somehow managed to make up a bit of ground on sixth, despite the foul currents and wind. The deck is a quiet place to be with just the susurration of the water against the hull.”

For the teams, knowing that they are not far from Race Finish in Da Nang which will mark the completion of the seventh of this fourteen race series, many of them are reflecting on the highs of this global endurance challenge. Darren Ladd, Skipper of IchorCoal says: It’s sometimes easy to forget what beautiful surroundings we are in and how enjoyable sailing can be for the mind and body. The good ship IchorCoal is making reasonable upwind speed, the heel angle is a manageable 25 degrees and life could be a lot worse.

“The midday meeting was a positive one. The stage of the trip has been reached where requisitions are in and a plan for the maintenance jobs in Da Nang, Vietnam are well underway. There is a stock take going on in the galley and a general relaxed air of a content crew around the boat,” Darren continued.

“Our tactics are straight forward enough. We are going to tack our way up the rhumb line, using the localised wind shifts to gain any advantage we can. It means more tacking, but it keeps the crew out of mischief and we all get a spell on the low side. Winner, winner!”

PSP Logistics has joined the beat northwards and Unicef has Virtual Mark 1 to round before doing the same. The first teams are due into Da Nang on 17 February where an action-packed and fun-filled stopover will begin in this first time Host Port.