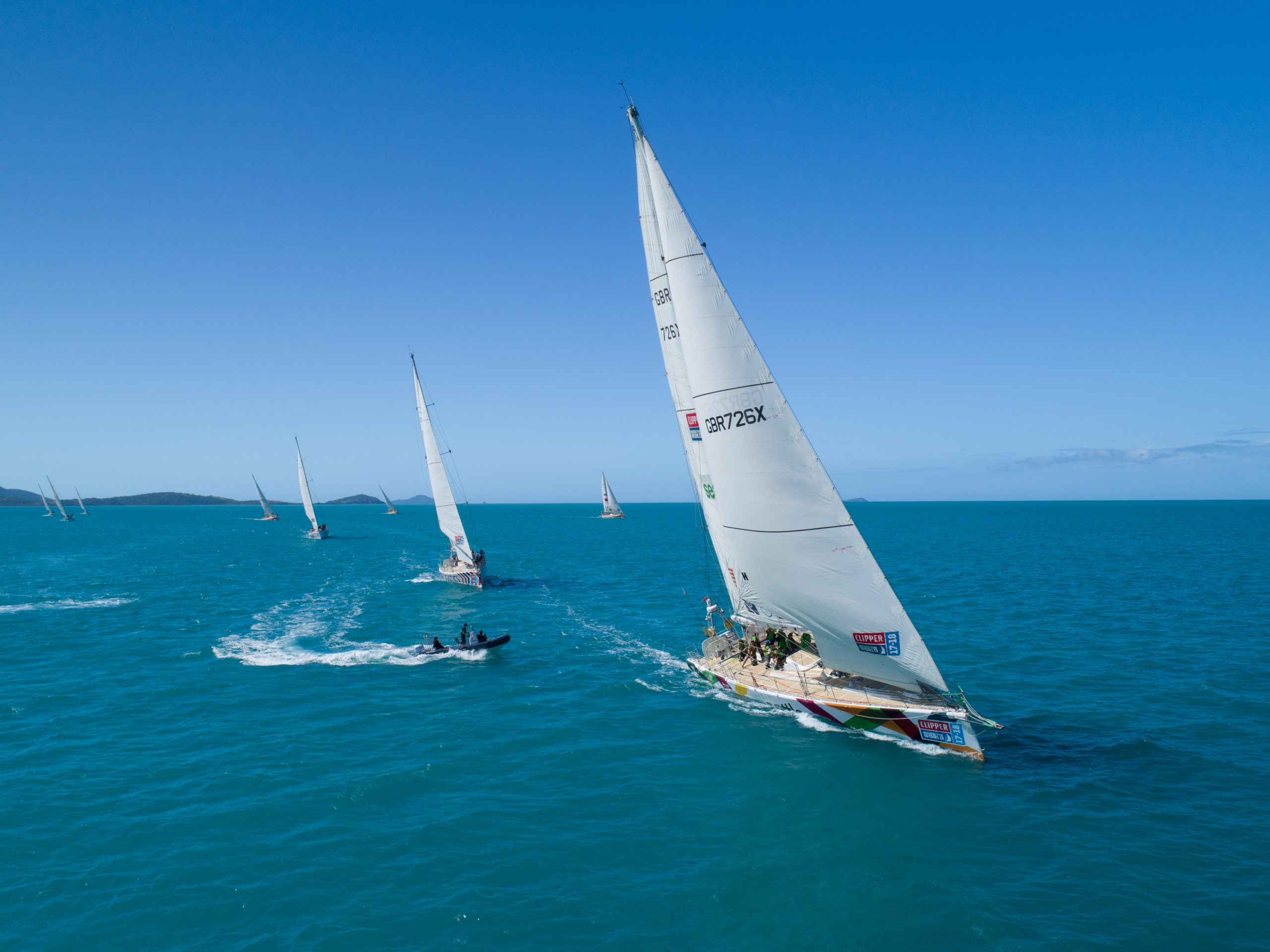 The Whitsundays was picture-perfect today for the Clipper Race fleet’s departure, with its blue skies, azure waters and steady winds providing the ideal scene as it bid farewell and headed off for the Le Mans start for Race 7: The Forever Tropical Paradise Race to Sanya, China.

In return, the teams also did their bit to put on a show and add to the excitement of the day. During a short course exhibition race in Pioneer Bay, off the Clipper Race’s time in the Whitsundays ended exactly the way it began – with a Visit Seattle win. Skipper Nikki Henderson and her team were the first team across the line, and maintained that lead for the remainder of the race to finish ahead of PSP Logistics and Sanya Serenity Coast.

The win means Visit Seattle will have the advantage of being the windward boat in tomorrow’s Le Mans start, with PSP Logistics and Sanya Serenity Coast to be the second and third boats respectively.

Sanya Serenity Coast goes into the 4,300 nautical mile race to its home port on top of the overall Clipper 2017-18 Race standings, and 25-year-old Victor Ansart, an Electrical Engineer, who joined Sanya Serenity Coast here in Airlie Beach for Leg 5, says: “Racing towards Sanya gives us extra incentive to win and do well.

“We haven’t done a Le Mans start before but we’re a good crew so I’m sure we will manage. The big advantage is that is a long race and whilst we are definitely going to try and win the start, there will be plenty of opportunities to catch up.”

HotelPlanner.com was the fourth team across the finish line in the short course race and skipper Conall Morrison was happy with his team’s effort, commenting: “The new crew have been busy settling into the team and have been working hard on boat maintenance and on the refresher sail. All the hard work showed when we had a good result in the short inshore race in front of Abell Point Marina, coming in fourth place with lots of good teamwork and tactics.

“We are now motoring 150 nautical miles away outside the Great Barrier Reef and the Le Mans start will be a fun and exciting way to start the long race to Sanya.”

Both GREAT Britain and Unicef unfortunately missed the Parade of Sail and short course race after suffering minor technical issues shortly before slipping lines. Race Director Mark Light explains: “GREAT Britain had a small problem with their throttle connector which was easily fixed and Unicef had an alternator that failed and we quickly replaced that and got both boats out on the water.

“We had said the finishing positions for the short course in the bay would form the starting order for the Le Mans start but with GREAT Britain and Unicef not being able to take part in that, we slotted them into the middle of the line-up. Unicef skipper Bob Beggs is the lead skipper for the Le Mans so he is position number six and GREAT Britain will form up in position number seven.”

With the fleet now motoring its way to the start area outside the Great Barrier Reef, Mark also took the time to reflect on the past few weeks, saying: “The Clipper Race stopover in the Whitsundays has been really good. It’s a beautiful area, we’ve had a great time to relax and recuperate. The teams are now off on a pretty long race to Sanya but they are all ready for it because of the break we’ve had.”

The race to Sanya is expected to take between 23 to 27 days, with the fleet expected to arrive into the Sanya Serenity Marina between the 21 and 25 of February.