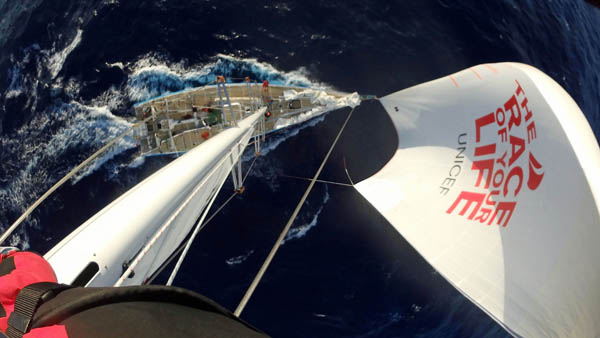 The Doldrums Corridor is fast approaching and with current weather predictions favouring teams towards the back of the fleet, it will be tactically fascinating to watch over the coming days.

While yet to officially enter the Doldrums Corridor, the latest weather reports show the Intertropical Convergence Zone, or dreaded Doldrums as it is commonly known, is north, giving the fleet a taste of what is to come.

Visit Seattle Skipper Nikki Henderson, currently in fourth place, reports: “Last night we saw the strangest sight; clouds up high travelling in a totally opposite direction to the wind. According to Clipper Race Weather Guru, Simon Rowell, this means the Doldrums are within a day away. Let's hope we reach the corridor before that happens.”

The searing heat is another indication the Doldrums are not far away, with Dale Smyth, Skipper of the ninth placed Dare To Lead, commenting: “A good 24 hour run on Dare To Lead, and we are managing to gain some ground on the group in front of us. However, this morning is incredibly light in the lee of the Cape Verde islands but at least still we are still managing to make progress.

“The heat on board is oppressive, even right through the night, so sleeping becomes difficult, with dashes to the deck to get out of the sauna below.”

On the leader board, Qingdao still holds a slim lead over the second placed GREAT Britain, and Skipper Chris Kobusch says that the conditions are definitely changing, as the Doldrums Corridor approaches.

“The sailing over the past 24 hours has been superb. We had a steady NE breeze of 10-15 knots and the Qingdao crew sails our yacht under spinnaker with ease and almost by themselves.

“We just got hit by our first tropical squall, with a rapid shift and increase of wind. Luckily the deck team was briefed and prepared for an emergency spinnaker drop and the lightweight kite (Code 1) came down smoothly and without any damage. We are now sailing 50 degrees of course under Mainsail and Staysail alone and need to reassess our sail plan. The squally, tropical race to the Equator has begun.”

Whilst Qingdao remains in first place for the seventh consecutive day, the chasing pack is growing ever closer. Just 68.87 nautical miles now separates Qingdao from the fifth placed Liverpool 2018, whose Skipper Lance Shepherd reported: “It was another champagne sailing day behind the lightweight kite (Code 1) with the heat bearing down on us and the winds at our backs.”

Sanya Serenity Coast, fourth overall,  faces one more day of waiting to see if Greenings will cross the Scoring Gate by 02:55:51 UTC on Tuesday 5 September to replace it and take the final bonus point on offer. The most immediate concern for Sanya Serenity Coast Skipper Wendy Tuck however, is holding  position after a tactical error overnight, which has already cost the team once place, to Visit Seattle, this morning.

“We would have been in a much better place but I had one of those middle of the night silly calls, and we stayed on a gybe going west way too long,” says Wendy. “But never mind, still a lot of sailing to go before this is over.”

The chasing pack, sixth and seventh placed Unicef and HotelPlanner.com, currently within 5nM of each other, have the potential to make up some miles before the Doldrums Corridor begins as the Trade Winds are expected to push further south.

Unicef Skipper Bob Beggs says: “We are now back under upwind sails, i.e. Yankee and Staysail, and the Spinnakers are packed and ready for going aloft at the next opportunity.”