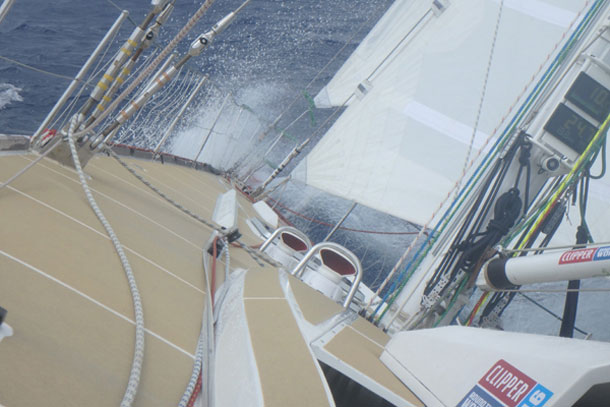 As of 0900 UTC (midnight AEST), Race 1 leader LMAX Exchange is only 43 nautical miles from the finish line and should be berthing in Marina da Gloria, Rio de Janeiro, tonight.

Following Garmin’s decision to go into stealth mode, it remains in fifth position but three other members of the following pack have also decided to exercise their right to go under the radar ahead of their final approach. GREAT Britain, currently in fourth place, was three nautical miles behind Derry~Londonderry~Doire when it went into stealth mode at 0000 UTC. Second placed Qingdao did the same at 0600 UTC and Derry~Londonderry~Doire has declared its intent to follow suit at 1200 UTC.

Clipper headquaarters noted a glitch in the race tracker when it entered the teams deciding to use stealth mode, this basically made every boat that had used the mode, invisible on the viewer. This has all been rectified and until 1200 UTC only GREAT Britain and Qingdao will show in stealth mode, after that they will be joined by Derry~Londonderry~Doire.

Meanwhile, making the most of the steady trade winds off the South Atlantic high, Visit Seattle, Clipper Telemed+ and PSP Logistics are all in the Ocean Sprint course between 5 degrees south and 10 degrees south. Each of them hoping to record the fastest time for the sprint which would result in an extra two points. Currently the time to beat was set by Qingdao at 30 hours and 11 minutes but Visit Seattle Skipper Huw Fernie is hoping his team can beat that:

“We're ocean sprinting today, so we are all trying our best to keep Visit Seattle moving as fast as possible. It’s easy in heavy winds, but a lot harder when the winds drop off. Still, if you can learn anything from Skipper Igor Gotlibovych and his team on Qingdaoit's that we also need to maintain the intensity; so there has been a little less sleep than usual and a good amount of focus on the trim of the boat too. With just 60 miles left on this Ocean Sprint section we have until lunch time today to get across the line.”

LMAX Exchange has rounded Cabo Frio and thereby missed the small front forecast to come in on Saturday morning, bringing with it some squall activity and a change in wind direction from what has generally been north-easterly to south or south-westerly. With the finish line in sight, LMAX Exchange Skipper Olivier Cardin says the team have been enjoying some fast sailing:

“Yesterday was a surfing day under our heavyweight spinnaker and more than 30 knots of wind. All the team was happy to feel some extreme speed sensations. Leg 1 crew member Jens Augustinsson took the opportunity to set the new speed record for this leg at 26.2 knots.”

LMAX Exchange is expected to reach race finish today with the estimated arrival times for the rest of the fleet as follows: