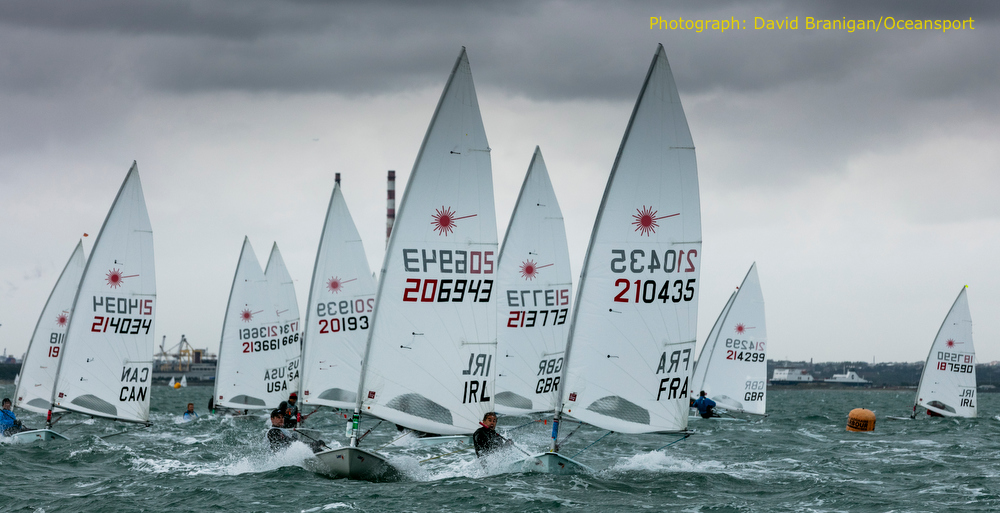 As the 302-strong fleet prepares for a well-earned rest day on Wednesday (12th September 2018) at the Laser Masters World Championships at Dun Laoghaire, nine of the Standard and Radial rig divisions have comfortable overall leaders.  The third day of racing on Tuesday also saw local sailor Mark Lyttle break into the overall lead of the Standard Grand Master class after winning both races.

Conditions on Dublin Bay were again breezy though lacked the large wind-shifts of the earlier races.

Australian Brett Beyer extended his overall leading margin in the Standard Master class to 12 points over fellow Aussie David Whait as the pair again top the 60-boat division that is increasingly becoming a contest for a runner-up podium place.

Italy’s Marco Sorgassi, racing under Irish colours for his adopted home venue reckoned the day was typical for Dublin Bay with strong gusts and plenty of subtle windshifts.  “It definitely wasn’t as physical as the opening day but playing the shifts required complete concentration,” said the Radial Master currently in eleventh overall.  “We’re looking forward to the rest day to mentally prepare for Thursday!”

Britain’s Stephen Cockerill dispelled any doubts after Tuesday's uncharacteristic 16th place by again winning both races of the 58-boat Radial Grand Masters division to continue his overall lead.  Meanwhile, New Zealand’s Scott Leith added his fourth race win of the series in the 28-strong Radial Master class where he now enjoys a 10-point lead over Robert Hallawell of the United States.

The run of leading boats continued in the Radial Great Grand Masters where Bill Symes of the United States also won both races in his 37-strong fleet.  Fellow American Peter Seidenberg in the Legends fleet for 75 years and over in the Radial class had a Black Flag disqualification in Race 5 discarded so he is still only counting race wins with a healthy ten-point lead.

Amongst the host nation boats, apart from Lyttle’s performance in the Standard Grand Masters, six Irish boats are in the top ten ten and vying for a podium result in the Standard Apprentice class.  While Canada’s Good Welsh has been duelling with Spain’s Leandro Rosado for first and second places since Sunday, Roger O’Gorman from Cork is holding third overall in the 14-boat division but with five more tricolours bearing down on him.