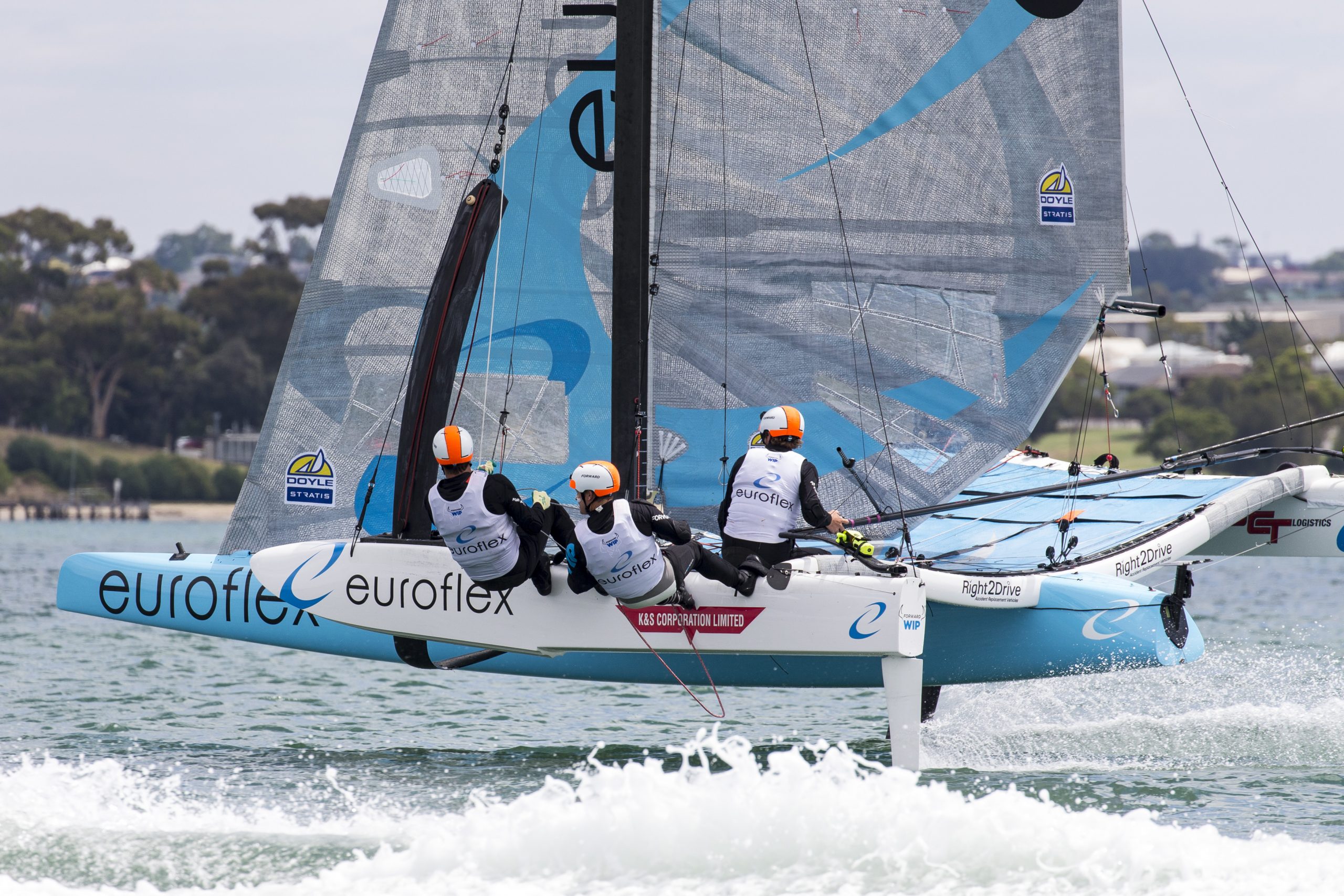 (Geelong) Glenn Ashby has praised his Euroflex team-mates Nathan
Outteridge and Iain Jensen for vaulting him to victory and a clean sweep of
his home regatta in Victoria.

“Hats off to the boys today. I don’t know how many kilometres of rope we
would have moved today or how many thousands of times Nathan was
pressing on those buttons [on the tiller],”said Glenn Ashby the winner of the
SuperFoiler Grand Prix event in Geelong, “I am just stoked for the win and
really happy for the boys.”

The ‘dream team’ continued their winning ways in Victoria – extending their
unbeaten run to 15 races in a row.

“It was awesome to do it in Geelong. We had a lot of knowledge from
Glenny,” said Euroflex bowman Iain Jensen, “He knows just about everyone
down here so it makes the victory even sweeter.”

Euroflex Skipper Nathan Outteridge has his eye on more glory, hoping that
his team-mate can return the favour when it comes time to racing in New
South Wales.

“We have been here in his home venue and it was really great to sail the way
we did in front of his friends and family,” said the Olympic Gold medallist
who knows the challenge is going to click up a gear on the Gold Coast, “The
gap is closing and we expected that, they are incredibly difficult boats to
sail.“

There were five races on a supercharged Sunday, with Euroflex scooping all
of them. Although Pavement and tech2 showed shades of cracking the blue
bolter’s so far impenetrable armour with both machines leading the races for
long periods of time before being reigned in.

“We hit 33 knots out there, we were absolutely sending it. It’s just a matter of
time before one of these boats finish over the top of Euroflex,” said
Pavement helmsman and second-place finisher Steve Thomas.
Astoundingly the machine that missed an entire weekend of racing at the
Adelaide regatta and needed major repairs to take to the start line in
Geelong, tech2, was able to round out the podium.

“We are stoked to be able to get through all the races and prove we’re
mixing it up with the front group,” said tech2’s Skipper Luke Parkinson who
finished the regatta in third.