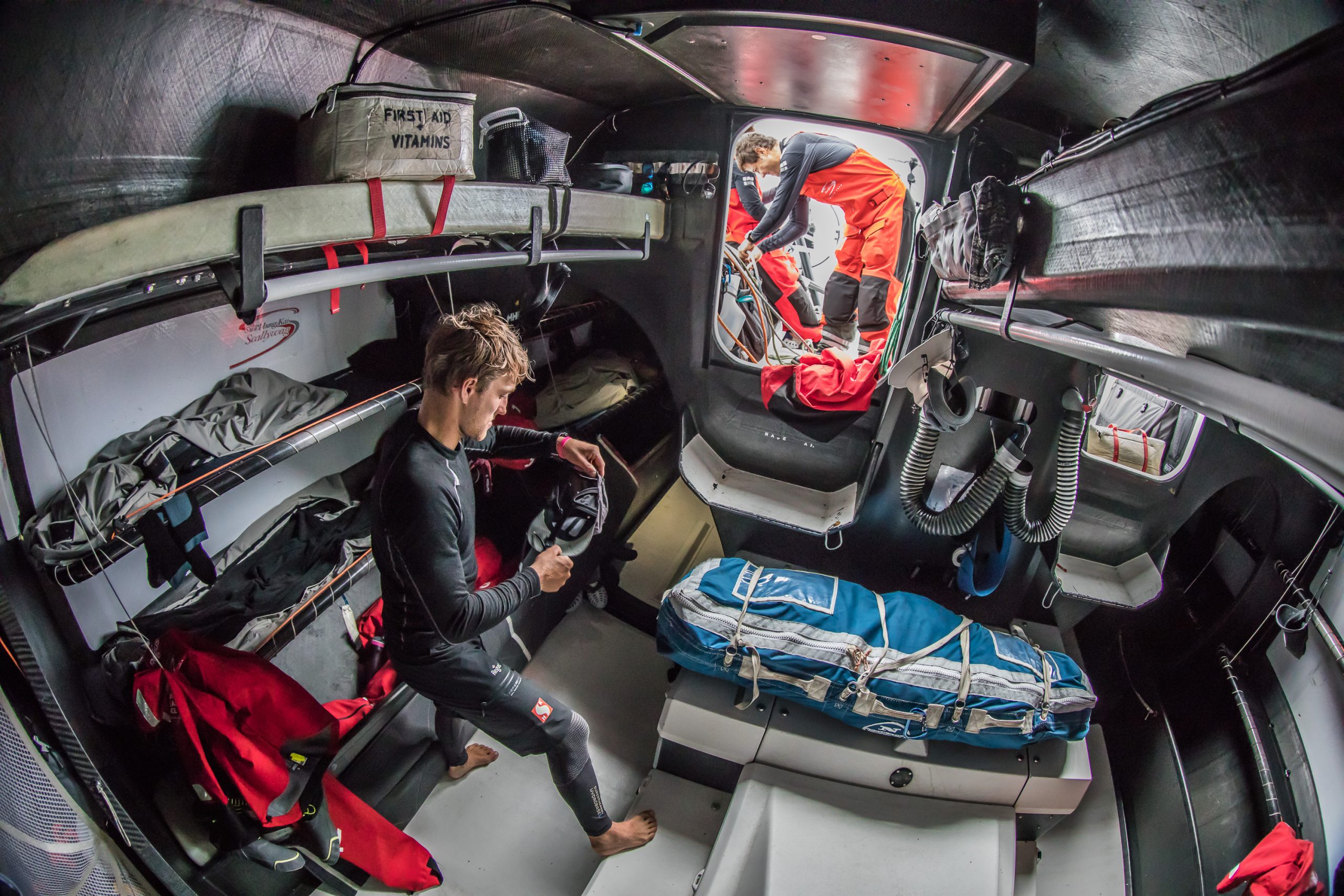 On Saturday UTC, the Volvo Ocean Race fleet continues the perverse scenario of sailing away from the finish line in New Zealand. While the fleet is split in two, reflecting differing tactical choices, all six boats have pushed well to the north, with the finish line in Auckland far to the south.

The reasoning behind the northerly routing is weather based, a classic trade-off of sailing more miles in exchange for better conditions and speed. The calculation the navigators have made is that the increased speed will more than compensate for the extra distance.

On board MAPFRE, the team is taking a light-hearted view of the situation where the boat has been heading northeast to get to a finish line in New Zealand, which is far to the south.

“Yes, it’s that way, it’s on the bow. We cannot be wrong, they’re following us,” replies Pablo Arrarte from the helm, gesturing at the other boats in view.

Eventually, the fleet will turn to the south, negotiate the doldrums, and push into the tradewinds that will carry them to Auckland.

But not just yet. There is still plenty of intense, close racing ahead.

As of 1300 UTC on Saturday, the leading group of four was separated by less than seven miles, with MAPFRE leading Dongfeng Race Team, Team Brunel and Turn the Tide on Plastic.

“It's been intense since the beginning,” said Dongfeng navigator Pascal Bidegorry. “I have the impression that we have not stopped working. Many manoeuvres, even last night, we may have been a bit too greedy with the sail changes.

“But things are going well. There was an important decision to make earlier and we did not make the mistake of tacking too early after Taiwan. Now, we are going around the anticyclone, with a front and a second anticyclone coming closer to us, but that will be for tomorrow…”

The important decision Bidegorry is referring to was the tactical choice to tack hard north immediately after passing the southern tip of Taiwan. Both SHK/Scallywag and team AkzoNobel made this choice and for the moment, it has left them over 100 miles behind the leading pack, who waited to tack and appear to have escaped light winds close to the east side of Taiwan.

However, the trailing pair has finally picked up the favourable northerly shift they’d been looking for. For most of the day, they’ve been sailing in stronger winds and the deficit has come down by 20 miles over the past five hours. Whether that trend continues for long enough to make up for the early losses is something we’ll know by this time tomorrow.