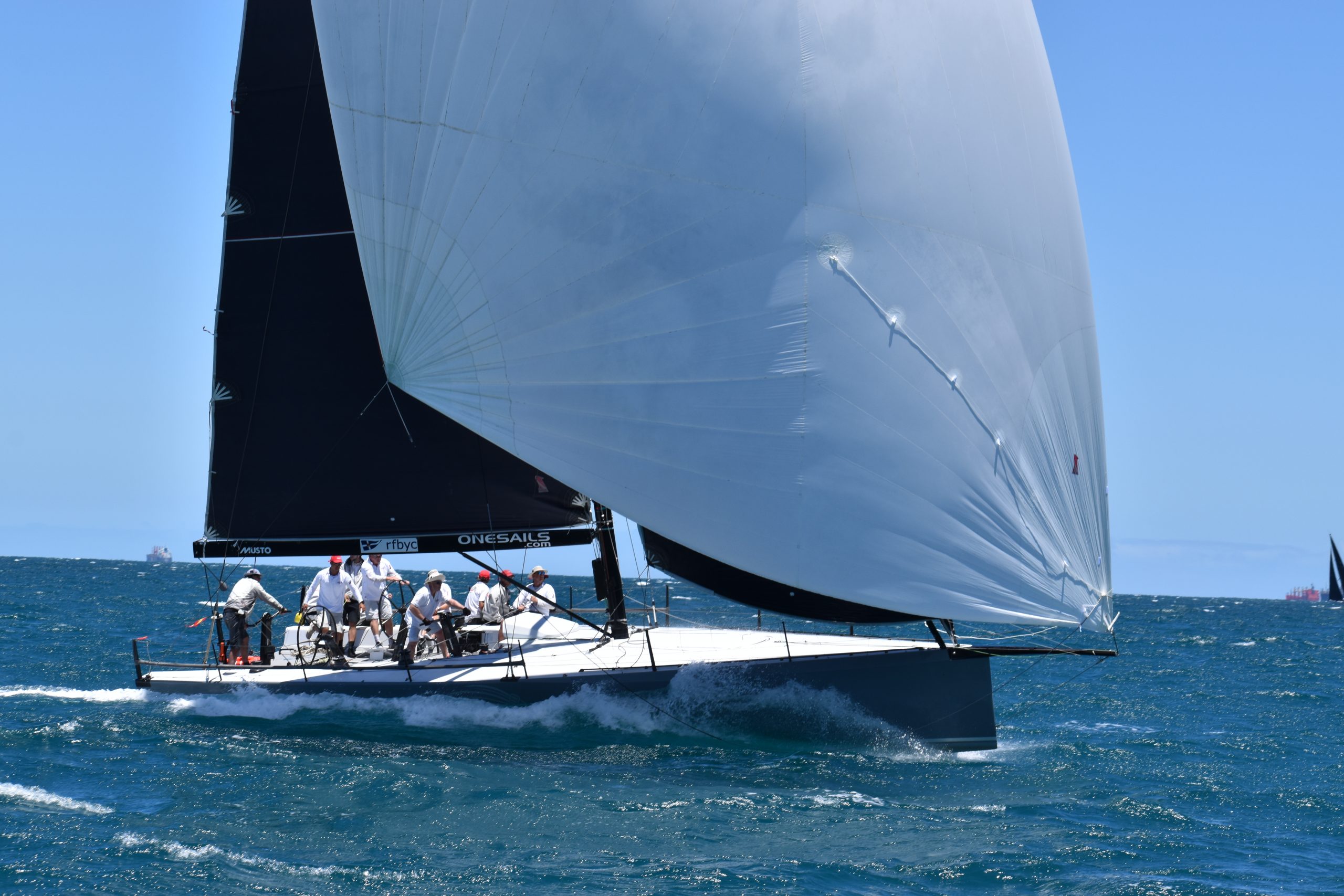 Indian racing along the WA coast.

She was built to race the 1971 Admiral’s Cup and became one of Australia’s most iconic ocean racing yachts.

At the time the brief to designer Olin Stephens was to match the dominance of Syd Fischer’s Ragamuffin on the water, but no expense was to be spared to fit her out with comfort and opulence. Salacia II was to be faster and prettier. They became fierce competitors in events such as the Sydney to Hobart but raced alongside each other as teammates in the Admiral’s Cup.

The beautiful ocean racing yacht Salacia II now calls Royal Freshwater Bay Yacht Club in Perth, her home. But her place at the river based club has not ended her offshore career. She will contest the 73rd Bunbury and Return Ocean Race scheduled to start at midday on Friday 12 February. The 170 nautical mile race is not the longest in Western Australia but it is the oldest and has a special place in the history of ocean racing in the state.

Salacia II’s owner Ross Norgard has a passion for magnificent boats and is also the owner of Pollyanna, a glorious classic Halvorsen.

He recalls growing up racing in Pelicans (junior sailing boat) on the Swan River and admiring local offshore beauties such as Eun Na Mara and Panamuna. “It was a big deal as a young sailor, following the ocean racing yachts and seeing them on the water. I have always looked forward to trying it. It’s amazingly pleasant to be at sea, so different to racing on the river where it can be quite busy.”

Ross has ocean racing in his blood, his Father raced on Joyous in long distance races such as the Cape Naturaliste and Return Race.

For the 73rd Bunbury, Ross has a team of great sailors and legends, a mature but fiercely competitive team like the yacht they will race. The host club, Royal Freshwater Bay Yacht Club’s Commodore Rob Parker is part of the team. He too has ocean racing in his blood with ten Bunbury and Return Ocean Races on his CV including racing with his Father on his S&S 34 Cappoquin in the 50th event.

Recently awarded a Lifetime Achievement award by Australian Sailing, John Longley sailed his first ocean race in 1964. It was the Cape Naturaliste and Return Race on a boat called Yeulba, once owned by the Governor General but at that time she was in very poor condition. John comments on his first experience offshore, “We almost did not make it back, but I loved it.” Later he sailed with Peter Packer in Corsair and then Hotspur, the first fiberglass racing yacht in WA. They raced the Sydney to Hobart in 1968 which was where John met Alan Bond.

Off he went to England to teach and sailed with Alan on Apollo in Cowes doing many UK ocean races including the Fastnet. He began sailing full time, contested the Bermuda and the Transatlantic. They built Apollo II and represented Australia in the Admiral’s Cup in 1973.

These amazing experiences led John to compete in 5 America’s Cup campaigns (including a win) and 3 Admiral’s Cups with plenty more ocean racing in between.

For his next journey offshore John says “Sailing on Salacia II will be very special. I raced against her many times in the early seventies. She was a great boat then and did very well so to race on her after so many years is a real treat.”

Also in the crew, Graham Moss is not only a football legend and Brownlow medallist he has an impressive yachting history too. This includes the 1995 Sydney to Hobart on Second Term, many offshore races in WA in the 80’s and 90’s (return races from Fremantle such as Cape Naturaliste, Bunbury and Geraldton) and competing in various National and World Championships in the Etchells class.

Peter Gilmour needs little introduction with an impressive match racing history he is an America’s Cup veteran, was named Western Australian Sportsman of the Year in 1987 and is a four-time World Match Racing Tour Champion. As does Andy Fethers, four times America’s Cup sailor and two times World Champion.

It doesn’t stop there, many ocean miles amongst the rest of the crew and it must be an amazing experience for them to race offshore on the beautiful Salacia II.

Having a chat about the Bunbury Ross comments that “At least one of my crew asked about the menu before confirming his position in the team. Salacia II has an oven, a fridge, a decent toilet and a good menu, I understand she is much more comfortable than the modern yachts we will be racing against.

Stronger winds would be better for us, at 33 knots she sails high and stable with good speed to windward. We can punch through a sea doing 7.2 knots. For the ride back from Bunbury, 15 knots behind us would be nice and we would fly our big spinnaker. We are out there to enjoy the race but we are competitive too.” Wondering whether she still has a blooper in her sail wardrobe?

He continues “We are looking forward to the return leg and finishing in the afternoon at an appropriate time for a post-race beverage with the team.”

Quite the opposite of Salacia II but of similar size is the Carkeek 47 Indian, also racing for Royal Freshwater Bay Yacht Club. Owner Craig Carter comments, “Great to have the mature sailors out there with us on a mature boat. Us younger fellas on Indian will certainly be doing it a lot tougher in the race, but we look forward to finishing on Saturday morning and putting a few coldies on ice for the old boys coming in much later in the afternoon.”

Indian is a modern powerful example of a Grand Prix yacht with a tall mast and deep keel. She was launched in 2014, has broken many ocean racing records locally, has one the prestigious Siska Trophy in WA and placed a credible 11th over the line in the 71st Rolex Sydney Hobart Yacht Race, one of the toughest editions of the great race south. Indian is the current race record holder of the Bunbury and Return coming in at 17h 42m 09s in the 2016 race.

Her fit out downstairs is quite the opposite of Salacia II, not very luxurious but more in line with a modern ocean racing thoroughbred. While the average age of his crew is much younger than Ross’s team, Craig is racing alongside his peers on Salacia II. Like Ross, he grew up watching the ocean racing yachts in his youth, aspiring to one day be part of the challenge.