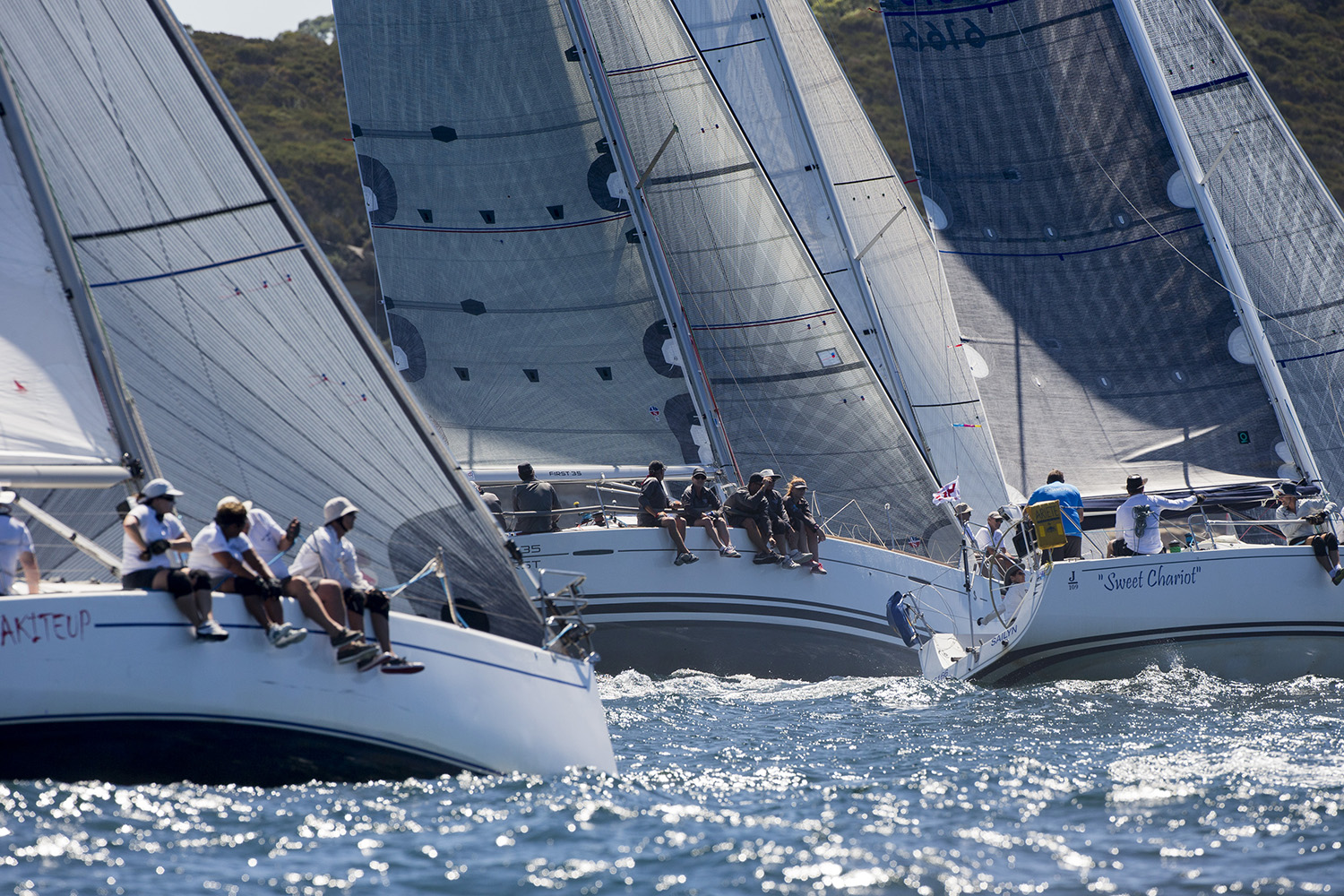 Battle lines will be drawn when a variety of classes hold their championships at NSW’s largest keelboat event, the Sydney Harbour Regatta, to be hosted by Middle Harbour Yacht Club over the weekend of 4-5 March.

The 11th anniversary regatta is just two and a half weeks away and already close to 150 national and international entries have been received, boosted by the Sydney 38 OD International Championship, the Sydney 36 Championship and state championships in the Cavalier 28, Yngling and J70 classes.

Competition in the Sydney 38’s will start one day earlier, on Friday 3 March and class proponent, Bruce Taylor, points to fellow Victorian entrant, Kirwan Robb (IKON38) as “the one to beat.”

“Kirwan Robb has been sailing consistently well with the Sydney 38 and a Beneteau – he is the benchmark – the favourite. My guys should do well, I hope they make the podium,” he ended.

Taylor, who is also an experienced offshore racer, is the long-time owner of Chutzpah38, and while his boat will be on the start line along with the core of his ocean racing and one design crew, Taylor will not.

“I’m disappointed I can’t be at the regatta, but I have to be overseas at that time. I’m entrusting the boat to my crew. My main trimmer, Jim Conway, will skipper,” he said.

Many new faces have joined the class, so Chutzpah and others will be grappling with relatively unknown quantities, including overseas entrants such as Renaud Gerardin and Mana Malmezac from New Caledonia, charterers of Calibre, and Malo Leseigneur with Faster Forward.

New Caledonian, Leseigneur, is former world class Laser sailor introducing a crew with just a year’s experience together. He says, “I have sailors from various horizons and levels, but they are filled with the same passion for sailing. We come to Australia in order to learn more about the boat as we prepare for the next edition of the Groupama race in 2018.”

The Sydney 36 makes its Sydney Harbour Regatta debut as a class event and has also drawn some recognized faces from the ocean racing ranks. Ed Psaltis, best known for winning the 1998 Sydney Hobart, sold his ocean racer and replaced her with a Sydney 36 of the same name – Midnight Rambler.

“It’s going to be a real challenge, sailing around the buoys at this regatta, and it’s one I’m looking forward to,” says Psaltis.

“The boat’s a cruiser/racer, it’s got lots more below than any of my other boats (this is his seventh), but they’re fast. I spoke to other owners and my crew and they told me ‘go for it’. It’s got a spinnaker pole, which I’m not used to, but my son Ben will be along to help out.

“I've  also got some of my old experienced crew along and we’re looking forward to a fun regatta, and that’s what I want to get out of it, some fun racing.”

The Melges 20 class has also attracted some big names and according to MHYC member and one-design enthusiast, Guido Belgiorno-Nettis, is “one of the most competitive classes in the world. All the best sailors race them. It’s a sports boat on steroids.

“I bought a Melges to add to the excitement and X-factor,” says Belgiorno-Nettis, a longstanding Sydney 38 and Farr 40 owner/skipper who cites Matthew Crawford and his ‘Big Booty’ crew of 49er sailors as the ones to beat.

“If I get anywhere near the podium I’ll be happy. It’s been a few years since I last entered this regatta, so I’m looking forward to returning,” he ended.

This fast and fun boat made its Australian debut at last year’s Sydney Harbour Regatta where Big Booty was the standout, winning all six races from Scott Lawson’s Numero Uno, which is also entered this year. Others worth watching include John Bacon (Darkstar) and Queensland’s Rod Jones (Machiatto 20); both have been successful in a variety of classes.

A raft of classes, including other one-design and production boats, along with open yacht classes, will take part in the popular event on both Harbour and offshore courses.

There is still time to enter, with entries closing at 2400 hours on Monday 20 February 2017. After this date, entry shall be made in writing and may only be accepted at the discretion of the Organising Authority.

Enter on line and view entries at the new website: www.shr.mhyc.com.au