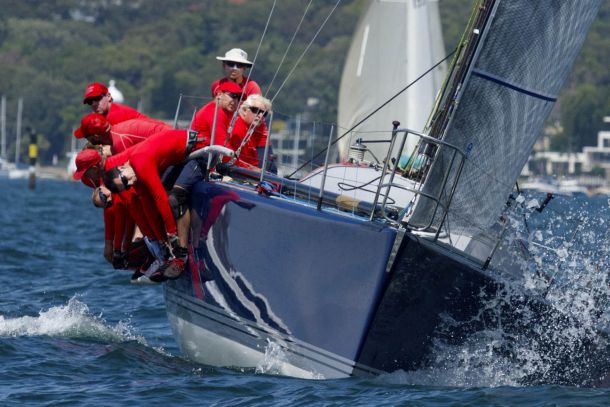 On the opening day of the 2014/15 Farr 40 season’s stage two Aberdeen Asset Management One Design Trophy and stunning final day of summer in Sydney, four different crew combinations pulled off a win from five races.

Voodoo Chile’s skipper Lloyd Clark returned to helming duties on Sydney Harbour after an extended break and this afternoon he’s atop the pointscore. “It’s just like riding a bike, you don’t forget. But it is good to be back and a nice surprise to be boat of the day. The crew made it easy for me,” Clark said on Middle Harbour Yacht Club’s marina.

Voodoo Chile is the regatta’s only non-NSW Farr 40 one design entry, though there’s plenty of Sydney-based talent on board the high-calibre Tasmanian boat.

New to the team given his regular ride, Lang Walker’s Kokomo, is sitting this one out, is North Sails’ Richie Allanson. On Allanson’s performance Clark joked “I didn’t realise Richie could sail as well; I thought he was a salesman for Norths and that money just went from my bank account into his.

“I’m pretty excited with our result after day one. It was very pleasant out there, anywhere between 8 and 15 knots. It got a bit funky in places,” the skipper added.

Second on progressive points is Rod Jones’ Kindergarten also with a mixed interstate crew, theirs from NSW and Queensland. Double Olympic gold medallist Malcolm Page, another Kokomo regular, made a guest appearance as Kindergarten’s tactician standing in for Bucky Smith who works in the power tool business in south east Queensland and is supporting his clients affected by Cyclone Marcia.

“Bucky organised Mal for us and today Mal added just that little bit more breadth to our knowledge, which will help us enormously in the coming months,” said Jones. The wind “doing strange things on the right hand side of the course, in under South Head, and at the top mark made it difficult to know where to place the boat” the skipper admitted.

Kindergarten and third placed Transfusion are well in touch with the series leader heading into tomorrow’s remaining races.

Principal Race Officer Ted Anderson completed the planned schedule on The Sound, an area of Sydney Harbour that can be influenced by heavy swell. Not today. “We had a lovely sea-state and sailing day,” said the PRO. “Races averaged 40 minutes and the breeze slowly built all afternoon, up to 15 knots mostly out of the nor’east. Racing was extremely close; in race three the fleet finished within three seconds of each other.”

Owing to a weather warning, tomorrow’s program begins with an earlier 1000hrs start of race 6 and another four scheduled making up the 10 race series. For the first day of autumn, Sunday March 1, 2015, the Bureau of Meteorology’s closed waters forecast is for winds north to north-easterly 15-25 knots shifting southerly 25-30 knots mid to late afternoon ahead of a southerly change associated with a cold front, a very different dynamic to today’s gentle opening.