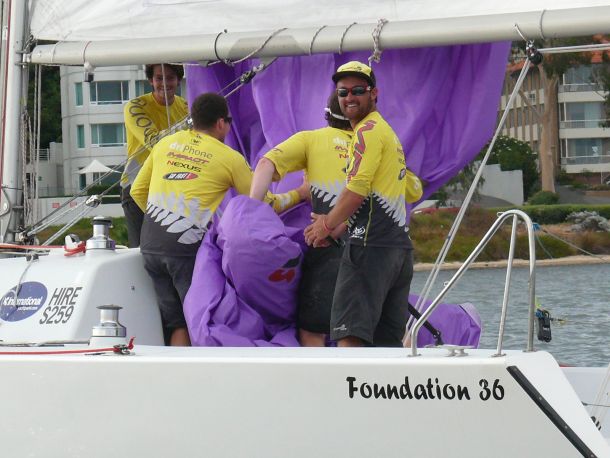 Chris Steele and his crew from the Royal New Zealand Yacht Squadron have won the 2015 Warren Jones International Youth Regatta, beating local skipper Sam Gilmour on a count back after racing in the final was curtailed by light winds.

It was a case of finishing a job that he started three years ago, having finished third in the two previous Warren Jones Regattas, and the victory came after a long and frustrating day afloat on the Swan River, where very light and fickle winds hampered the programme of races.

“It’s a big relief I guess,” was his summary of the result, “obviously we tied out there on the water with them, but some results that went our way earlier in the week made the difference. We’re stoked that we came away with it, because it wasn’t looking good for a long time out there.”

Steele and his crew of Hamish Hardy, Shane Diveney, Josh Salthouse and Harry Hull were challenged all the way in the testing conditions, being taken to a third race in the quarter-finals by Japan’s Kohei Ichikawa. Then in the semi-finals it was Australia’s Lachy Gilmour who took them to three races, before he needed a count back to win the final.

This is the second year in succession that Sam Gilmour has been runner up in this event, having been beaten by his elder brother David last year.

The Warren Jones Regatta was hosted by the Royal Perth Yacht Club, and run by Swan River Sailing, and is for sailors under the age of twenty five. The trophy was given in memory of Warren Jones, who was the driving force behind Australia II’s famous victory in the America’s Cup in 1983.