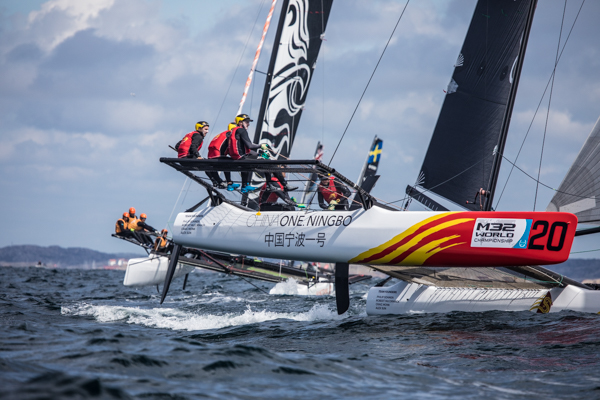 Phil Robertson turned in the most consistent four scores on day two of the M32 World Championship in Marstrand, Sweden, the Kiwi skipper of ChinaOne Ningbo finishing the day with a win and 3,5,4 scores, which moves him to the top of the 15-boat fleet, six points ahead of Jonas Warrer from Denmark and Chris Steele from New Zealand.

Robertson doesn’t even believe he’s operating at the top of his game. “I’m really sick, been fighting it the last few days,” he rasped, struggling to get his words out.

“I guess it means the boys have to dig in a bit harder. I’m not as sharp as I usually am, but the top fives are what will win you the regatta. It's the bad ones that will lose you the regatta, it's not the occasional 1s and 2s that will win it for you. We pulled ourselves out of some sticky situations, so we’ve got to be happy with our day.”

Warrer was a little over eager on the start line, pulling the trigger too soon on three out of four occasions. “I can’t hold her back,” he joked. Considering how important good starts are, it’s impressive that the Dane still holds second overall, on equal points with one of yesterday’s joint leaders, Steele.

The CFA Sport Racing skipper was philosophical about a difficult day whose highpoint was a race win in the second heat of the day but concluded with a 14th in the last race of the day.

“It was a very tricky day with the breeze dropping throughout the first few races,” said Steele. “We didn't start well. Our trigger pulls weren't bad but we just got rolled by a couple of boats.

“That's what happens in this fleet. If you get rolled on the first reach you soon find yourselves at the back. If you look at the results, it was a more high-scoring day than yesterday. Although we had a deep one in the last race, our heads are still up and we'll come out swinging tomorrow.”

The second-best performer of the day after China One Ningbo was Convexity, with Don Wilson rounding off the afternoon with a race win followed by a third. For an owner-driver in the Corinthian division, Wilson clearly has the measure of the professionals in the fleet and the ability to finish on the podium this week.

“We had more points today than yesterday but compared to the fleet we had a better day,” said the Chicago businessman. “There were some big wind holes, some shifts, very tricky sailing conditions. Today we had an over-early in the first race although we came back really well. We need to keep fighting and not have any more over-earlies.”

Another Corinthian who enjoyed his moment in the sun was Jimmy Prendergast who steered Grave Digger to victory in the first race of the day. He’s only been sailing the M32 for fourth months, so it was a thrilling moment for Prendergast to cross the line ahead after stealing the lead at the final turning mark from Warrer, the 49er Olympic gold medallist from 2008.

“We were really excited about it, we were staring at each other like, I can't believe this just happened! But we had some problems yesterday so we said, let's shake it out today and really nail it. We were excited about teamwork and staying consistent. The team did a great job of communicating and keeping everyone on the same page.”

Gazprom Team Russia upped their game with two second places and then a sixth in the final race of the afternoon. Skipper Victor Serezhkin said: “We had a change of mentality and we started to relax and we started doing better. We were having more fun and the results got better.”

Maybe relaxing and having fun is the key to doing well out on the wavy waters of Marstrand. The reaching starts are intense, and timing is critical. But some are showing that there are other ways back to the top even if you start out badly. With the regatta at the halfway stage there is no dominant performer and the championship remains wide open.

This evening the sailors are invited to the Liros Party in the Park for some drinks and nibbles. Day three of the regatta looks like the wind is going to be up and so it will be an early night for some tired sailors.