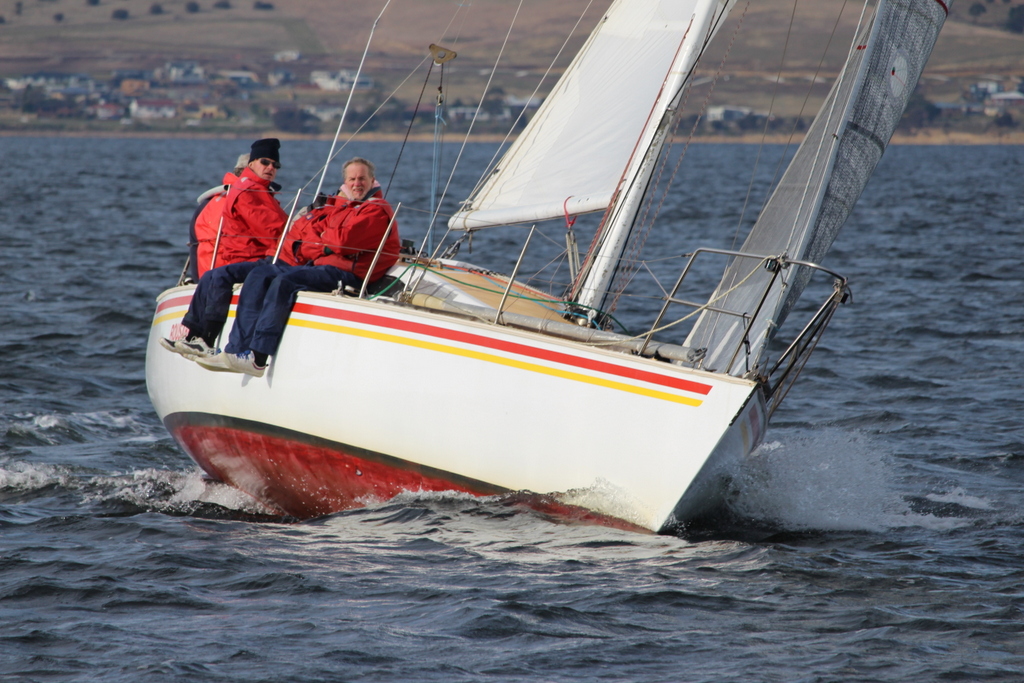 Hobart’s winter yacht racing started on Sunday, in classic end-of-autumn/early winter weather – fog on the hills around the city,  a wind chill factor of close to zero or below, and a shifty northerly breeze on the River Derwent.

Well rugged up for the weather, the hardy crews of 24 boats took to the river for a morning of close racing in Bellerive Yacht’s Club’s first race for its Hobart Jaguar Land Rover Winter Series.

“Derwent River at the beginning of winter…racing in 6 – 17 knots with 4 to 11 degrees…. eeek!” commented Michelle Denney, co-owner of Wild West with husband Michael.

BYC was first away with winter racing today, the Derwent Sailing Squadron and the Royal Yacht Club of Tasmania running their winter pennants in consecutive Sunday mornings through to early September.

“The ‘Bridgewater Jerry’ (a heavy morning fog that sweeps down the Derwent and over the city of Hobart and its riverside suburbs) was in full flight,” reported Bellerive Yacht Club sailing manager Peter Watson. “The wind chill temperature was close to zero degrees, or below, and the shifty northerly breeze of 8-15 knots made the upwind and downwind tactics critical.

“The ever-present down river current made the centre of the river problematic for setting a good course.  Race officer Grant Sutton made the correct call in shortening Divisions 2 and 3 as not to exceed the 12 noon race time limit.

“We had an excellent fleet of 24 boats from all three main clubs.”

Wild West from the Derwent Sailing Squadron and TasPaints, skippered by retiring BYC vice-commodore Ian Stewart, had a close duel for line honours in Division 1,  with the Mumm 36 finally overtaking Wild West to get the gun by 21 seconds.

In Division 3,  Paul Johnstone’s Skeme finished seventh in fleet but first on handicap, winning from Paul Einoder’s Off-Piste and Jim Thorpe’s Hydrotherapy which took fastest time in an impressive showing.