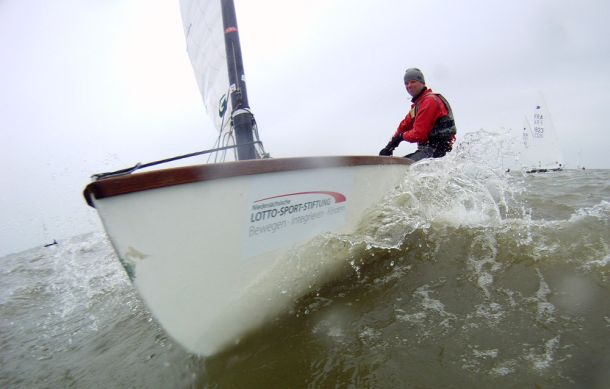 Charlie Cumbley (GBR) has won the OK Dinghy Spring Cup in Medemblik for The Rüdiger Prinz Trophy at the first attempt after a win in race 7 sealed the event for him. Jim Hunt (GBR) finished second with Greg Wilcox (NZL) just maintaining third after a late charge from Rene Johannsen (DEN).

The forecast strong winds seemed to blow themselves out overnight leaving a choppy sea and 14-18 knots, which gradually reduced during the day. It was a grey day though with rain coming through later. Wilcox made the best of the first race to lead round the first triangle. Then Cumbley came through on the second beat to lead to the finish for his fifth race win and the overall win with a race to spare.

The wind moderated slightly for the final race with reduced visibility and grey skies. This seemed to suit Hunt, who rounded the top mark in the lead. Cumbley briefly took the lead downwind, but on the second beat Hunt favoured the middle while the rest took the right. Hunt crossed back with a nice lead again and led to the finish.

With Cumbley and Hunt a clear first and second, Wilcox took third by a very narrow margin after Johannsen and Bo Petersen (DEN) closed the gap with some consistent sailing.

It was a very tough weekend, sailed in some testing and tricky conditions across all wind ranges. Charlie Cumbley was the deserved winner of the Rüdiger Prinz Trophy. This is the first year that this trophy has been presented. It was created in memory of long time OK Dinghy sailor Rüdiger Prinz who died earlier this year. It is a half model OK Dinghy in orange, the colour of his boat. The Spring Cup was one of his favourite events, so his friends decided it would be a fitting tribute to his memory. A collection was also taken in the Brakeboer pub last night, where EUR 300 was raised to be given to his family's chosen charity.