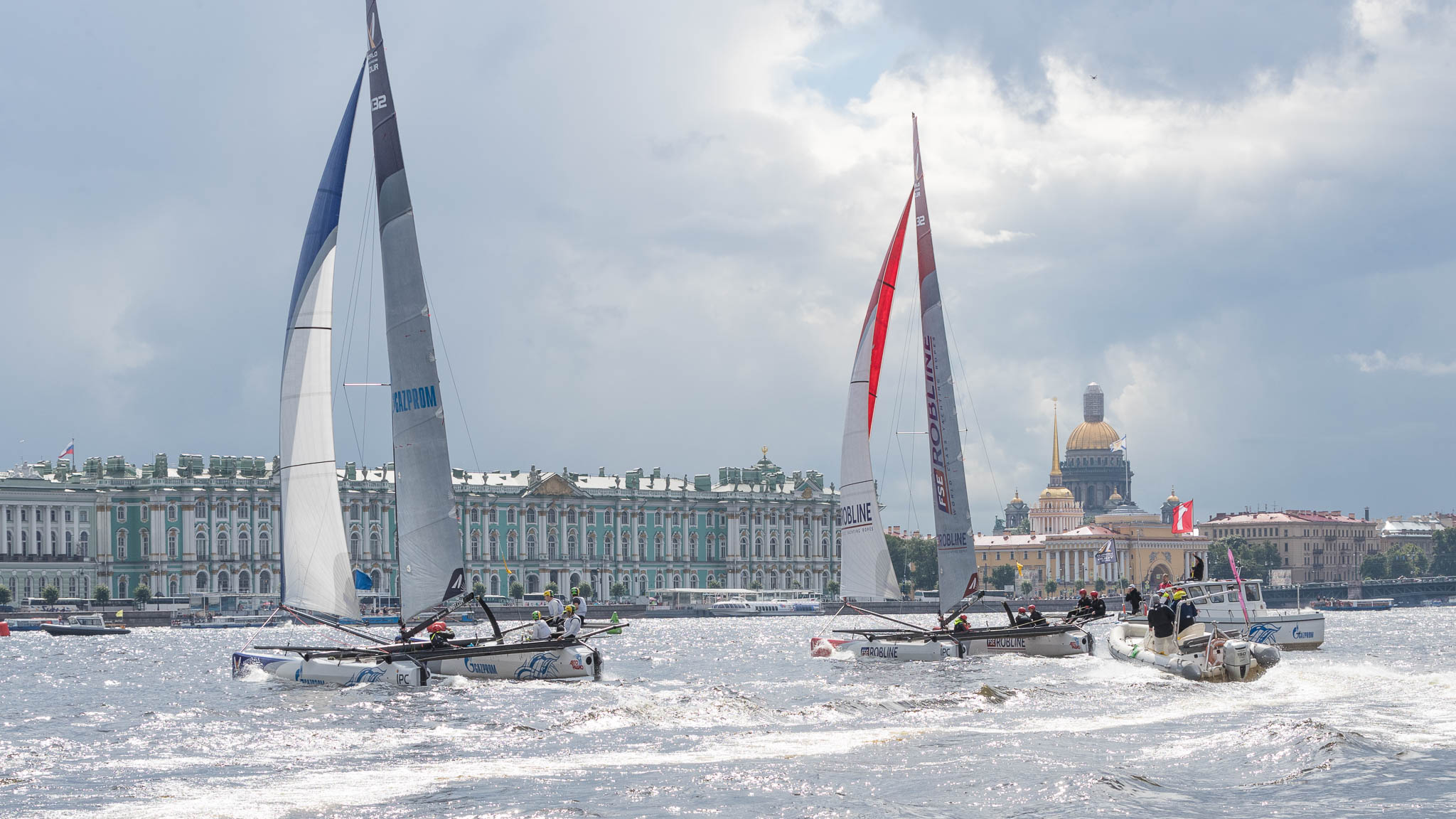 St. Petersburg, Russia: On a day where one big name had already been sunk, Kiwi Phil Robertson, the Match Racing world champion, kept his head above water to make it through to the semi-finals Stage of the WMRT Match Cup Russia.

There is a reason Robertson (CHINAone Ningbo) is unbeaten in the M32s this season, and he showed it by winning 3-2, surviving a heart-pumping comeback by Pieter-Jan Postma (Sailing Team NL), who had been 2-0 down.

Robertson, who came from 2-0 down in the previous SUPER 16 stage to win 3-2, has not been pushed so hard this season. “There’s nothing like a bit of pressure,” Robertson said. “It was a ding-dong battle.”

Conditions on the Neva River, with a 10-12 knot south-westerly, were much more stable than Friday, but still shifty and tricky. The 2-3 knot current was against them on the downwind.

The funnel effect of the river passage through St. Petersburg is lessened because the race area in front of the Peter and Paul fortress in the heart of the city, a long way up the river. With the wind from the south-west it is more stable as it heads up the southern inlet around Vasilievsky Island. As it veers west it splits up the northern inlet.

Postma, older than Robertson, but a new kid on the match racing block this season, lived up to his ‘Flying Dutchman’ moniker by rolling over the top of the New Zealand skipper at over 20 knots after losing the start of race one. But the ever cool-headed Robertson re-took the lead and then dominated the second race with a wire-to-wire win.

Postma won the race three start; Robertson roared back on the second downwind cutting a 150m lead to 20m, but could not get past and finished just two boat lengths behind. A blue flag penalty in the pre-start on Postma, who had lost 3-1 to Robertson in the semi-finals of GKSS Match Cup Sweden a month ago, looked like being decisive.

Robertson then left his gybe too late at the first mark, Postma roared away downwind and Robertson completed his misery by hooking the downwind mark. Game over.

With hindsight though, Robertson’s calm during that hook spoke volumes. As did his comment to his three teammates before race five, caught by the on board mic: “Right, this next pre-start is going to be full on.”

Robertson tied Postma in the 2-3 knots of current. The Dutchman ended up facing the wrong way as Robertson roared off. The decider was an anti-climax after that. “It’s a very small box and a very tricky current,” Robertson said. “I thought we could push it and I knew PJ’s starts are probably his weakest part.”

Robertson’s semi-final will be a battle of the big guns against the six-time Match Racing World Champion from Britain, Ian Williams (GAC Pindar). “We’ve been sailing these boats for a year and a half and somehow we’ve never been up against Ian in either the fleet or match racing. We don’t really know each other, but I guess we’ll find out.”

Williams had an easier route through in the afternoon, beating Jonas Warrer (Aarhus Innovator) 3-0. But Williams uncharacteristically lost the start twice against the far less experienced Dane. Their second race was one of the best of a high-tension day and the lead changed three times on the final downwind, after a masterful decision by the Brits to go right at the last top mark – something they had talked about before the start.

“Punching the current downwind is critical and we had fantastic speed downwind,” Williams said. “The start is very tricky with the current. We’ll definitely have to sail better tomorrow. We’ll have a good debrief. We’ve been watching a lot of Phil’s starts today, but I’ll tell you tomorrow if it worked.”

The second semi-final could not be more different as two of the rising starts of the tour meet in an all-Australia, all-Perth and all-sailing buddies match between Sam Gilmour (Neptune Racing) and Matt Jerwood (Redline Racing).

In the morning, Gilmour pulled off the shock of the day by winning 3-1 against Yann Guichard (Spindrift Racing). The French multihull specialist over all distances was the top seed from the Qualifying Stage and had beaten Gilmour 3-0 at both Match Cup Australia in March and GKSS Match Cup Sweden in July.

The signs looked ominously familiar, as Guichard, who is a generation older but newer to match racing, shut out Gilmour in the pre-start and won an almost uncontested first race. But Gilmour won the next three starts and took wire-to-wire victories that were clinical and relatively simple in the context of a day of changing leads.

“In the first race, I really buggered up the start and then he sailed the race with no pressure,” Gilmour said.

“We know we’re more experienced match racers than he is and that we had got into the racing to take advantage of that. We won all three of the next starts and it was the sort of course where as long as you kicked the bottom gate right, you were generally in a pretty good position to hang on. Our tactician, Mark (Spearman), made some pretty good calls on the gates, he made the right calls every race.”

Another son of a famous match racer was not so lucky. Måns Holmberg, son of Magnus, Olympian, America’s Cup sailor and one of the founders of what became the World Match Racing Tour and a winner of it in 2001, lost the other ding-dong battle of the day 3-2 against Jerwood.

Jerwood lost the start in race one but sailed over the top of the Swede, then won the second wire-to-wire. But Holmberg levelled with his own wire-to-wire victory and then made a fantastic comeback in race four as he somehow gybed inside Jerwood rounding the bottom mark.

But they saved the greatest drama until the end as Holmberg came back from a double penalty at the start. Jerwood hooked the buoy at the bottom mark of the first downwind, but his teammate, Patrick Vos, calmly jumped into the water and unhooked them. They escaped before Holmberg could get round and take control.

“Sam is really strong in his tactical game and he’s done a lot more practice recently, so we’ll have to come out all guns blazing,” Jerwood said.