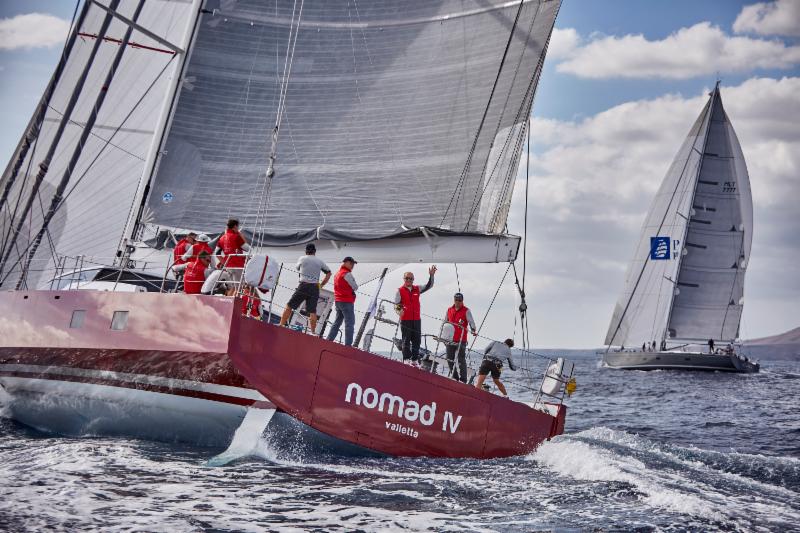 09/12/2015
Nomad IV is expected to take Monohull Line Honours in the RORC Transatlantic Race later today with ZED 6 in full flight coming in from the north and Nunatak celebrate mid-Atlantic with shooting stars and Jelly Babies. For the next few days, steady tradewinds of 15-20 knots are predicted for the yachts at the front of the RORC Transatlantic fleet, giving a fast broad reach to Grenada.
Camper & Nicholsons Port Louis Marina in Grenada is bracing itself for the arrival of the RORC Transatlantic fleet with a warm welcome and the cold beer on ice. After a fast 10 day crossing, Jean-Paul Riviere's French Finot Conq 100 Nomad IV has just 84 miles to go. Having averaged just under 12 knots for the 3,000 mile race, Nomad IV led the monohull fleet out of the Canary Islands and has never looked like relinquishing their advantage. It will be a sweet victory for the French/Russian team as in last year's inaugural race, the powerful canting keel Maxi broke their boom forcing their retirement shortly after the start. It was interesting to see that Nomad IV chose to leave Barbados to port, avoiding a potential wind shadow from the only Caribbean island on the rhumb line. Will the other yachts choose the same route or try to gain miles by cutting the corner?
Nomad IV is the firm favourite to lift the IMA Trophy for Monohull Line Honours, but now has a slender lead to lift the RORC Transatlantic Race Trophy for the best elapsed time under IRC. Southern Wind 94, Windfall, skippered by Irish Olympian, Tim Goodbody have been catching up Nomad IV. Windfall is now estimated to be under five hours behind Nomad IV on corrected time. Nomad IV damaged their spinnaker two days ago and the team will be hoping that the repair will hold out. As Nomad IV approaches the finish several gybes will be required to negotiate the leeward side of Grenada. Perfecting these manoeuvres will be essential to retain the overall lead under IRC.
Gerald Bibot and Michel Kleinjans Belgian catamaran, ZED 6 is expected to be the next yacht to finish the race after Nomad IV. Gerald is the founder of Great Circle which produces the revolutionary weather prediction and routing programme, Squid. The Two-Handed team predicted the faster passage would be a northerly route and ZED 6 stuck to their guns and was the only team to take the cold, and at times brutal 'high road' line. “ZED 6 has similar polars to a Class40, so we will know if our chosen route is correct if we fair well against them,” commented Gerald before the start of the race. ZED 6 is currently 260 miles ahead of the leading Class 40, Gonzalo Botin's Spanish Tales II and 150 miles ahead of  Windfall.
Maurice Benzaquen's French Pogo 12.50, Aloha is currently 1,100 miles from Grenada and expected to finish the race on Monday 14 December. The French team are all from Brittany and have a secret weapon – French cuisine, as Maurice explained by satellite connection on Sunday 7 December:
“Here we are with over half the race completed and no more fresh food. Only a few oranges left, two peppers, some carrots and 10 potatoes. But we have some special cans! Starting yesterday night with a Cassoulet du Quercy with confit duck legs and haricots Tarbais. For the remainder of the race our choice is between: Cuisseau de Pintade au Monbazillac, Coq au Vin de Cahors, Tripoux Aveyronnais de Naucelles with potatoes from Lanzarote. Other delights include toast with Foie Gras de Canard du Lot and Filet de Porc confit. We have no more fruit left either so we have to make ourselves some Verrines de Fruits Exotiques with a crumble of speculos. Not to forget homemade tuna fish cans cooked by our friend Christian from Douarnenez. Bon appetit!”
Elin Haf Davies also contacted the RORC media team by satellite connection. Racing Two-Handed with Chris Frost, their J/120, Nunatak has 1,500 miles to go to reach Grenada.
“Well it's all happening here on Nunatak as we finally crossed the halfway mark! HOORAY! But boy it was a long time coming. Yesterday morning was particularly hectic as we had two squalls hit us in quick succession. Not sure if I've already mentioned it but we don't use snuffers and drop our kites via the letter box. Which obviously means completely repacking each one each time. On a good drop I can manage to get the kite down the companion way all by myself. On a bad one, Chris has to jump from behind the helm (in Ninja style!), to help me out. The second squall resulted in a particularly bad drop which required a major effort by us all! Thankfully with no damage to kite or boat, but my porridge did fly across the deck and land in my already very smelly deck shoes. Yuck!
“In other news the nights are now becoming a little bit lighter and we're able to see an amazing galaxy of stars, including a lot of shooting stars. I saw one spectacular one last night and made an extra special wish, that Chris would let me eat all the halfway celebratory Jelly Beans to myself! Not all shooting stars make your wishes come true it seems. My cooking skills have also reached new heights. For lunch today we had a tablespoon of Nutella and a handful of salted cashew nuts. I was able to persuade Chris that it was the right combination of protein, carbohydrates, sugar and salt to count as a nutritious meal for all top performing sailors…! Wind is all over the place, in terms of direction, but GRIB files promises that it should be better soon. Keeping everything crossed for a faster second half.
“P.S any Guardian readers out there – keep an eye out for Wednesday's edition, where my digital health start up, aparito is featured as one of the Nominet Trust top 100 tech social enterprises. Thrilled to hear the news, if a bit disappointed to be missing out on the party!”

Follow the progress of the race via the fleet: http://rorctransatlantic.rorc.org/tracking/2015-fleet-tracking.html