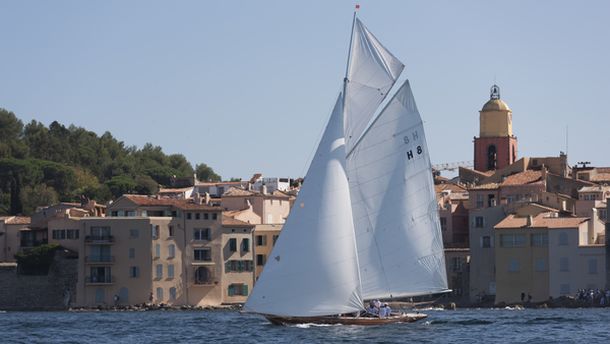 Less than one week to go and organisers in Gstaad and St Tropez are working on the final details to welcome some of the most stunning centenarian yachts still sailing, lining up for the 2015 edition of the Gstaad Yacht Club Centenary Trophy. The regatta, that has become the true and unique rendezvous for the oldest ladies of the circuit is scheduled for Thursday October 1st 2015, and is expected to be yet again the focal point of classic racing at the Voiles the St. Tropez, hosting event of the regatta.

For the fifth consecutive year the Centenary Trophy will gather one hundred years and more old yachts that will go head-to-head in a pursuit race based on an especially created and constantly refined handicap system, a format that has proved extremely attractive for the sailors and the public alike, with the first boat to cross the line off the St Tropez breakwater to be declared the winner.

A new entry for this year's Centenary Trophy is huge gaff cutter Moonbeam IV, that with her 35 metre overall length will also be the biggest competing yacht. This William Fife III design is the fourth of a series of boats called Moonbeam, built between 1858 and 1920 in Fairlie, Scotland at the William Fire & Son shipyard. She underwent extensive restoration works between 1998 and 2002 and since coming back on the racing scene, she has been collecting a series of victories in the most important Mediterranean regattas. Her sail number 8 has, over the years become a distinctive “brand” on the classic yachts circuits.

“It's going to be our debut at the Centenary Trophy as Moonbeam IV has turned 100 only last year. We are the rookies in this very unique group, that comprises boat such as Marigold, Moonbeam III… It's great to have such an event because it highlights the heritage, the history of the centenarians. It's important to show that with care, devotion and most of all passionate and committed owners these boats can last almost forever,” said skipper Mikael Creac'h, one of the most renowned and respected sailors in classic yachting. On board Moonbeam IV in St Tropez will also be Joan Bonet, Commodore of the prestigious Spanish Real Club Nautico de Palma. “I'm very pleased that Moonbeam IV will represent our club and will fly our flag in such an important event. I very much look forward to it.”

But the event will welcome other “rookies” too. One is the William Fife III's designed gaff cutter Tern that being less than 12 metres long and being launched in 1897 will be not only the smallest but also the oldest entrant. The fore and aft cutter Eva, a Fife III's design from 1906, will be on the starting line too and will be skippered by Charlotte Franquet who declared: “After an attempt in 2013, when bad weather conditions did not enable us to race, we are going back to St Tropez and are looking forward to race our very first Centenary Trophy.”

After an excellent second place on the podium in 2014, behind gaff cutter Olympian, the 8MI built by famous shipyard Abeking & Rasmussen back in 1910 Silhouette will be back on the starting line to try and beat the strong competition. “After a second place last year, we are very motivated to do better this year. The pursuit race format is just fantastic. We love the idea of competing against the most beautiful old yachts in the world. We are very much looking forward to the 5th edition of the Centenary Trophy, to sail with such a group of friends and sharing a unique experience on the water.” Declared Daniel Heine, owner of Silhouette.