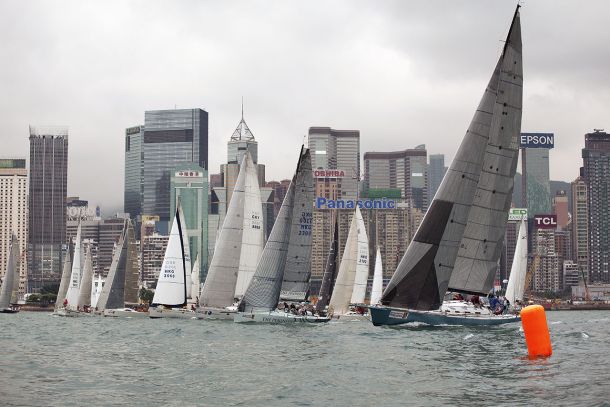 The 2015 San Fernando Race, which will start in Hong Kong on Wednesday 1 April, marking the 20th edition of this 480nm Category 1 offshore race, albeit with the 2003 edition falling victim to the 2003 SARS epidemic.

With the continued support of the Philippines Department of Tourism and run biennially under the auspices of RORC, the race attracts a sector of the sailing population committed to blue water offshore racing, with Hong Kong sailors being joined by their peers from Singapore, Australia, and New Zealand together with many other countries further afield, making it a truly cosmopolitan event.

Torrey Dorsey, Corporate and International Partnerships Manager, Royal Hong Kong Yacht Club stated, “The Philippines Tourism Board is a natural “fit” with this major offshore yacht race, with the boats, crews and other visitors celebrating their success on the beach in San Fernando. It is not only a prime example of the benefit of sailing as a form of in-bound tourism, but the San Fernando Race also delivers an important charitable message and contribution to this beneficiary. We are thankful for the continued support of the Philippines Department of Tourism, Hong Kong and Macau, the Consul-General of the Philippines and all other delegates that support and encourage this event.”

The race is known for its tactical challenges – rough conditions on the first night out, coupled with a network of holes as the fleet approach the Philippine coast have robbed many a boat of a first place – however year after year, competitors wax lyrical about the joys of sailing under a full moon with the promise of sandy beaches, blue seas and skies at the finish line.

An entry list of 24 boats under IRC or performance handicaps will be doing their upmost to smash the record of 49h 55m 12s set by Hong Kong sailor Sam Chan in 2001 on the 71’ ULDB Sled, FfreeFire.

Geoff Hill will be back to defend his Line Honours title with Antipodes, the Smith Custom 72 which lifted the SCMP Trophy and the San Miguel Trophy after just over 51 hours of “an awesome sail”, however Syd Fischer’s Ragamuffin 90 and Sam Chan’s TP52, FreeFire will be doing everything they can to get to La Union’s principal city at the front of the fleet.

Another entrant, Pete Churchouse, remembers the previous race as “the best China Sea crossing we’ve ever done in 30 years of sailing here. The boat didn’t stop once; there was a beautiful flat sea, gentle breeze … 10, 12, 14 knots – a fantastic trip”. The 75’ Warwick Custom will defend the IRC Premier Division title she lifted in 2013 against stiff competition from a clutch of 50-plus footers, Explorer, Clove Hitch, Xena and Sea Monkey.

Many of the boats will use the race as a competitive way to reach the beautiful cruising grounds of the Philippines, with IRC Cruising the largest division, with seven boats, ranging from an Oceanis 40 to a Benteau First 44.7 while the Racer division features several boats competing in the San Fernando Race for the first time. Fresh from McConaghy in Zuhai, Mills 41 Ambush will be showing her paces against Sydney GTS43 EFG Bank Mandrake while Salon 42 Jarrah represents owner Matthew Johnson’s first Cat 1 race. These racing machines are joined by familiar faces on A40RC’s Avant Garde, Sell Side Dream and J145-C Redeye.

The race not only gives sailors and opportunity to enjoy a highly tactical race over the Easter break, but has a serious purpose, supporting a local children’s home through the San Fernando Foundation. Fundraising events including a Dinner and Charity Auction will take place in the lead up to the race start, with the Foundation hoping to exceed the record HK$525,000 raised in parallel with the 2013 San Fernando Race.

Further information about the race is available on the event website www.sanfernadorace.com